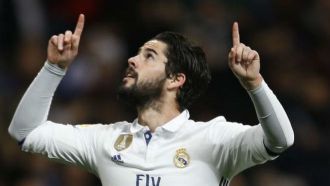 Sunday, 26 March 2017
In a week that has seen Isco linked with a potential move to fierce rivals Barcelona, ​​Real Madrid have made their move and offered the midfielder a six-year contract extension.

The 24-year-old is the subject of interest from other clubs due to the fact his current deal is set to expire in June 2018.

Heading into the final 12 months of the deal presents the club with all sorts of problems and it is a little surprise Los Blancos have moved to secure the future of one of their younger stars.

It is no secret that Cristiano Ronaldo, Luka Modric and Karim Benzema aren't going to be around forever and at some stage creative responsibility has to be handed to the former Malaga playmaker.

Manchester City have twice tried to sign him and if he had to leave the Spanish capital there would undoubtedly be clubs queuing up to make the Spaniard an offer.

This is what has forced Real Madrid's hand and they have put an offer worth six million euros per year on the table which would run until June 2024.

At that point Isco would be 32 years old and the contract, in theory, concerns the club his best years.

Zinedine Zidane hasn't quite been able to use him on too regular a basis this term but there is very much a feeling that if he is patient, he will soon be a regular starter.

This is reflected by the offer which would rather sensationally triple his current salary and catapult him into the upper echelon of Los Blancos' wage structure.

Despite having only started 13 LaLiga matches this term, a return of six goals and five assists is incredibly impressive and it is a little surprise the club have absolutely no interest in allowing Isco to leave.

In recent months, Gerard Deulofeu has managed his career, after it appeared he had reached his peak and stagnated at Everton.

A winger of unquestionable talent, he has found the consistency he has intended for so long since joining AC Milan, and he opened up on what it was like having to leave Barcelona's famed La Masia academy.

The Lionel Messi comparisons hurt my development, "he stated." It generated too much expectation surrounding me amongst Barcelona supporters - there is only one Messi.

"I don't normally read the newspapers but this comparison really stuck out."

One of his heroes however, was a bit earlier than the Argentine, and is a player that changed the club in equal measures.

"Ronaldinho has always been an idol of mine," Deulofeu continued. "He is who I admired when I was at Barcelona."

As to whether he'll one day return to the Blaugrana, anything can happen but the La Roja winger is focusing on the present.

"My dream is right now, the present," he concluded. "I want to enjoy the moment I'm in with Milan."

Romelu Lukaku struck late to save a 1-1 World Cup qualifying draw for depleted Belgium on Saturday against a Greek side who were down to 10 men for the final 25 minutes and finished with nine.

Lukaku's turn and shot in the 89th minute canceled out the opener from Kostas Mitroglou, who scored just 18 seconds after halftime in the visitors' first real attack of the game, to keep Belgium top of Group H.

Belgium, missing injured Eden Hazard and Kevin De Bruyne, took advantage of Panagiotis Tachtsidis's dismissal in the 65th minute for a second yellow card as they subject the Greek defense to a wave of attacks.

Giorgos Tzavellas was also sent off for a second yellow after a scuffle broke out deep into injury time.

Belgium had destroyed the other four group opponents, scoring 21 goals to just one against, while Greece came into the match undefeated.

Belgium were playing only for the second time since 2012 without both Hazard and De Bruyne, their two most creative forces.

With right-back Thomas Meunier also absent, Roberto Martinez had called the match the biggest test of his near eight-month stint as national coach.

Still, with a free-roaming Dries Mertens and a recalled Radja Nainggolan taking up Hazard and De Bruyne's positions, Belgium had appeared to be in control, although with only two chances from Marouane Fellaini to show in a dour first half.

Greek cheers and hugs at the end showed their delight with a point away against the group favorites. Belgium lead with 13 points, two more than Greece, with Bosnia on 10.

Verratti to snub Barcelona interest and stay at PSG

Barcelona were dealt a blow this weekend long-term target Marco Verratti indicated that he's set to continue with Paris Saint-Germain for at least another season.

The tenacious midfielder was commenting on his future after he helped the Italian national team defeat Albania to keep pace with Spain in the World Cup qualifying Group G.

"I'm happy in Paris, it's a great project and I'll still be there next season," he told RaiSport following the game.

Verratti has been a central figure once again this season under Unai Emery, having clocked up some 2387 minutes following his recovery from an injury which saw him miss out on featuring in the European Championship last summer.

Emery's future is far from certain, but whoever is in charge at the French side next season can rest easy in the knowledge that the Italian is tied down under contract until 2021.

Considered one of the best Spanish referees, the Spanish Officiating Committee has chosen Gil Manzano to officiate El Clasico on April 23 at 20:45 CET.

It'll be the second Real-Barcelona showdown he'll oversee, as the officiating body are pleased with the refereeing performances Manzano has been having this season thus far.

Manzano has recently officiated the second leg of the Copa del Rey semi-final between Atletico Madrid and Barcelona, ​​in addition to the controversial Villarreal -Real Madrid tie.
E-mail : [Email protected]
Previous: Skibe: "We can be proud." | Next : The 8 of the 12 goals in the qualifiers are Leva
Views: 4973
- 15 previous day