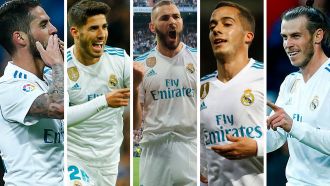 Real Madrid's season will be determined by one game and it will come on May 26 in Kiev.

Come May 27, the squad will either be celebrating at Cibeles or in the dock ready to face interrogation, so Zinedine Zidane's team selection will be crucial for the Champions League final against Liverpool.

Although until recently the coach was ready to trust the same line-up that beat Juventus in Cardiff, he may now have doubts.

"It's going to be a headache to choose the starting XI for the final," he said after a 6-0 thrashing of Celta Vigo on Saturday evening, with Gareth Bale scoring a brace.

The Welshman showed that he has the legs and the attitude and he built up momentum heading to Kiev.

But of course, if Bale starts, who does he replace in attack?

Right now, each player, each idea and each system which comes into Zidane's head has two sides, but he must choose a side which can beat Liverpool, who have the most prolific attack in the Champions League this season.

Bale's selection would be a statement of intent, but it may not be the right one to control the likes of Mohamed Salah, Sadio Mane and Robert Firmino.

That's why Zidane may instead consider Isco and Karim Benzema, both of whom are better at keeping possession.

If Zidane has proven anything this season, though, it is that he will pick those who deserve to be there and that will give Lucas Vazquez and Marco Asensio a shout, having performed well at every opportunity, including in some big games.

They give Zidane even more doubts and even more options of how to compete the puzzle.

With one game and 10 training sessions left, there will be a chance for players to prove their point, but Zidane's headache won't fade until he's on the touchline in Kiev.

Liverpool defeated Brighton & Hove Albion 4-0 on Sunday afternoon, with Mohamed Salah taking part in the scoring and netting his 32nd goal of the Premier League season.

Before the match he was named as the Premier League's player of the season, following on from his triumphs in the PFA and Football Writers' Association's own players of the year awards.

Marcelo celebrates 450th game on 30th birthday: It's a privilege to play for the best club in the world

After capping his 30th birthday with a 6-0 win against Celta Vigo, Real Madrid defender Marcelo insisted it was an honor to represent the club.

The game also had extra significance for him as he reached a Real Milestone, enjoying his 450th game as a Los Blancos player.

"I'm happy, I have the confidence of my teammates and coaching staff," he said afterwards.

"I am privileged to be playing for the best club in the world and that's the most important thing, to give everything for this jersey.

"It was a bit difficult at the start of the season but lately we have restored our feeling and have renewed confidence.

"We didn't manage to win the league but we have done everything possible to play well and win."

Before the Brazil international began looking ahead to the Champions League, he insisted their final league game would be important to send them into it with confidence high.

"We still have a game to play before then and we have to concentrate on putting in a good performance," Marcelo added.

"We will think about the final but first, it is about Villarreal and putting in a good game to have a good feeling before Kiev."

Al Khelaifi: Neymar is going to stay at PSG 2000 percent

The Brazilian has consistently linked with a move to Real Madrid, but Al Khelaifi won't countenance the sale.

"The Spanish media speak and have spoken since October saying Neymar is not happy.

"It's false and I will not respond to rumours.

"He has a contract and he's going to stay, and he can't be responding to everything that comes out in the media either.

Neymar's wishes to change teams for next season have hit a brick wall, and Real Madrid face, without a doubt, the most difficult time trying to get the French champions to part with their star man.

Actually, it's no longer about convincing PSG and its president, it's already about defeating a State that has Neymar as its great asset when it comes to selling the image of Qatar.

There is a lot of work ahead to get any deal done, so much so that maybe it's already too late for a move this year.

In Paris they know that it is not possible to keep Neymar for many years, but they've made it clear that, for now, it won't happen.

Next season is another story.

That is the vision that exists at PSG, beyond the pretensions that Neymar and his father may have of reaching Real Madrid this summer.