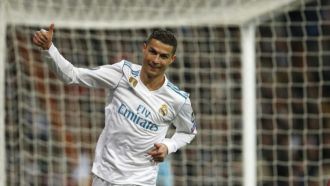 33 facts on Cristiano Ronaldo that maybe you didn't know

1. Second highest scorer in the history of the League

Cristiano Ronaldo has scored 294 league goals in 274 games. He is the second top scorer in the history of the competition.

2. Two sessions in which he hasn't taken

Ronaldo has played in Portugal, England and Spain. The striker has scored in all competitions in which he has participated except in the Community Shield and the Europa League. In the first he played a game and in the second, two without scoring.

Ronaldo has scored 99 doubles throughout his career. 73 with Real Madrid, 25 with Manchester United and one with Sporting Portugal.

He is the top scorer of the Portuguese national team, playing 147 games and scoring 79 goals.

5. Sevilla are his favorite rival

In total Ronaldo has 27 goals in 18 matches, counting all the matches, against Sevilla.

Neither Di Stefano, nor Raul, nor Puskas, nor Santillana. The top scorer in the history of Real Madrid is Cristiano Ronaldo. 427 goals in 421 matches.

7. The terror of Gorka Iraizoz

Gorka Iraizoz is the goalkeeper who Ronaldo has managed to beat the most times. The Basque keeper has been played 14 times against him and has conceded 15 goals.

8. He has mentioned 11 goals in finals

Cristiano has participated in 13 finals at the club level. In those matches he has scored 18 goals.

9. Three times winner of the Pichichi

10. Five-time winner of the Ballon d'Or

He is alongisde Leo Messi as the players with most Ballon d'Or's. In total he has five awards, the last two consecutively.

He has been the Pichichi of the Champions League for five consecutive seasons. In total he has six top scorer awards in the competition, since in the 2007/08 season when he managed it as a Manchester United player.

Since the 2006/07 campaign, Ronaldo has always exceeded the figure of 20 goals. His lowest record was achieved in that campaign, with 23. In the current one he already has 21.

14. Player with the most penalties scored in the League

Ronaldo has scored 77 of the 90 penalties he has taken.

Ronaldo has a total of 53 goals from direct free kicks, including seven with Portugal. With Real Madrid he has scored 33.

A specialist in the aerial game. The striker has scored 107 goals during his professional career with his head, including 65 for Real Madrid.

He made his professional debut on August 14, 2002 with Sporting Clube de Portugal. His rivals were Inter in the match corresponding to that season's qualifying phase for the Champions League. The final result was 0-0 and he was 17 years old.

18. First player to score 100 goals in the Champions League

Ronaldo has gone down in history as the first player to score 100 goals in the Champions League. Currently he has 115 also counting the qualifying phase. With Real Madrid the number of goals scored in this competition amounts to 99.

At 17 years old, he made his debut with Portugal's national team against Kazakhstan. Since then he’s been a fixture in the side.

It is not easy to score more than four goals in the same match. Few have been the players who can boast of having achieved it. Cristiano has scored five goals in two games. One against Granada and another against Espanyol.

His goals come from any position and with both his left and right foot. However, it is the right that we could consider his good leg. With it he has scored 331 goals.

Cristiano and Messi, the two best players of the last decade, have faced each other in 34 games. The Argentine has scored 20 goals and the Portuguese 18.

24. He has been sent off six times

Cristiano Ronaldo has seen a red card six times throughout his career. The last was in the first leg of the Spanish Super Cup final.

He's associated with the number 7, but it's not the only number that he has worn throughout his career. He has also used 17, 9 and 28.

The player with the most matches has shared Benzema. Along with the Frenchman, he has played a total of 329 matches.

28. Has played under 10 different coaches

Cristiano has had different coaches since 2002 until now.

His best scoring streak counting all competitions is 11 consecutive games in 2013/14. In those matches he scored a total of 15 goals.

On December 20, 2015, Real Madrid won 10-2 against Rayo Vallecano. It is the biggest win that Cristiano Ronaldo has achieved with a team. He was the author of two goals.

32. Record in a Champions League season

The 17 goals scored by Cristiano Ronaldo in the 2013/14 Champions League is the record for the competition. That year his team were proclaimed champions.

He has played against 128 different opponents throughout his professional career including matches with his national team.

The week starts with Liverpool - Arsenal and 0% rake!

At 22:00 at "Anfield" will host the great match between her Liverpool and Arsenal which completes the 3η Premier League match.

Both teams come from League Cup victories, with Liverpool beating Lincoln (7-2) and Arsenal overcoming Leicester (2-0). In the standings, Liverpool and Arsenal are tied in the top three with six points.

Arsenal have suffered four defeats in as many Premier League games when facing Liverpool away from home. These victories of the "reds" were accompanied by 4/4 over 3,5 goals while their last seven games with home team Liverpool gave us goals and spectacle (7/7 "4-6 goals").

The big derby Liverpool - Arsenal plays with 0% rake * and many special bets.