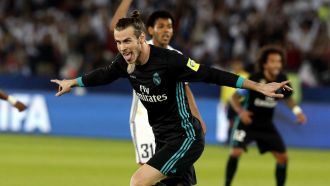 Zidane ready to thrust Bale back into the lineup

Real Madrid need a spark to get them going again after their 3-0 loss in the Clasico and Zinedine Zidane hopes that Gareth Bale can be the man to revitalize the team.

It made sense that the No.11 was left on the bench for the Clasico, given that he has just returned from injury, but now he has been a substitute for three matches in a row and is ready to start again after nine minutes against Al -Jazira, 11 against Gremio and 18 against Barcelona.

Bale, Cristiano Ronaldo, Isco and Karim Benzema would rarely be likely to play together, but Zidane won't have to make that tough decision in the next match, given that it will be a Copa del Rey game against Numancia on January 4, one which would have seen some stars rested anyway.

On January 7, however, Real Madrid visit Celta Vigo in LaLiga and the French coach will have to leave somebody on the bench, with Bale set to start.

He could leave Isco out and play the BBC front three together for the first time in eight months, or he could leave someone else out, perhaps Benzema, in order to play Isco and Bale together.

Either way, Bale is set to start and Los Blancos must hope to kickstarts their season.

Mourinho: 300 million pounds is not enough to compete with Manchester City

There was a Boxing Day surprise at Old Trafford as Manchester United were forced to fight back from 2-0 down at half-time to secure an injury time equalizer against Burnley, and Jose Mourinho hit out at the press after the result all but ended any hope of a title challenge.

The manager slammed the media for pointing towards his spending since arriving at the club, indicating that he believed it to be unfair.

"It's not enough, it's not enough," Mourinho replied, when one journalist pointed out that his club had spent 286 million pounds - around 322 million euros - since his arrival.

"Manchester City buy full-backs for the price of the strikers, so when you talk about big football clubs, you are speaking about the history of the club.

"And the price for the big clubs is different from the other clubs, so the big historical clubs are normally condemned in the market for that history."

He continued, again looking like a man under pressure as he questioned whether the assembled journalists understood the stature of Manchester United.

"There are many big clubs and you say big clubs," he said.

"I know what a big club is.

"Tottenham is not a club with the same history as us?

"Arsenal don't have the responsibility to win it?

"Chelsea doesn't have the responsibility to win it?"

However, he refused to criticize his players, despite dropping points at home.

"The boys are doing what they can and are doing fine," he said.

Next up for United is a clash with Southampton on Saturday.

Besiktas president plays down rumors of a move for Arda Turan

Barcelona are keen to move Arda Turan on from the club and one of the potential landing spots to have been mentioned in recent days is Besiktas.

However, the president of the Turkish club, Fikret Orman, has played down the reported interest from Istanbul.

"I like Arda Turan and I would like to see him in a Besiktas shirt, but we have players in his position," he said in the Turkish media.

"So far we haven't made any move for him."

Given that the former Atletico Madrid man has not played a minute for Ernesto Valverde this season, the Blaugrana are desperate to get him off their wage bill.

Yet the fact that he is earning a salary of close to nine million euros is making it difficult to convince any club to take on his wages.

Ahead of the January transfer window, Manchester United are keen to bolster their squad for the Premier League title race with it being reported that the club have turned their focus to Paulo Dybala.

It must be appreciated that a club the scale of United keeps tabs on most players of a high level, Dybala is no different and he is being monitored by many clubs across the continent.

A story reported by the Daily Star suggests that Jose Mourinho is confident of exploiting professional difficulties between the Argentine and Juventus coach Massimiliano Allegri ahead of making a move to sign the former Palermo forward in the summer.

Question marks have been raised in Turin over Dybala's professionalism and Allegri caused quite the stir when he left the club's star performer on the bench for the recent Derby d'Italia clash with table-topping Inter.

Alas, such a deal would be incredibly difficult to complete, not least because his contract with Juve runs until June 2022.

Juventus have also shown no indication that they would be willing to sanction any sort of transfer away from the club where Dybala is concerned.

There is also the small matter of Manchester United facing opposition from other clubs; both Real Madrid and Barcelona have been linked to the former Instituto forward.

For the moment, Mourinho continues to focus on his current current campaign with transfer plans likely to change between now and the summer.

Mbappe talks to MARCA: Real Madrid and I spoke, but that's now in the past

One of the breakout stars of 2017 has been Kylian Mbappe, who took the footballing world by storm with his performances in the Champions League and who was linked with Real Madrid all summer, before eventually joining Paris Saint-Germain.

Sitting down for an exclusive interview with MARCA, the 19-year-old explained that he no longer thinks about parallel life in which he'd currently be playing his football at the Estadio Santiago Bernabeu.

"It's true that we spoke, but I think that's now in the past for me and for Real Madrid," he said.

He spoke in detail about his contact with Los Blancos and about his admiration of Cristiano Ronaldo, while he also spoke about his connection with Neymar and previewed PSG's upcoming last 16 clash with Real Madrid.

The full interview will be available on Wednesday's MARCA, both in print and online.