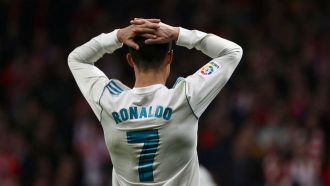 Following a string of impressive performances at the end of last season, it appeared as though Cristiano Ronaldo would take his form into the new campaign, however his suspension has taken away any rhythm he had to leave him on a drought disparate.

The winger has failed to score in any of his last four LaLiga matches and as a result the team is suffering, their talisman is not producing and for the first time in his glorious Los Blancos career, the Portuguese forward cannot be relied upon.

As he continues to struggle, the anxiety amongst the squad only rises yet further, it is unfortunate for Zinedine Zidane that this lack of form has coincided with a string of poor performances by Karim Benzema.

Valencia and Barcelona are looking to be the two teams fighting for the LaLiga title, with ten points separating both Madrid clubs from the Blaugrana and a sense that the two capital rivals will now be watching from outside this term.

Zidane was able to micromanage Ronaldo last season, he was kept fresh in time for the final stretch of the season and was thus able to perform to his maximum level in the latter stages of the Champions League.

Alvaro Morata's presence helped this significantly; the French coach could rely on him and had no concerns about restoring the club's star.

This season has seen Morata depart for Chelsea and Los Blancos recently replaced him, there is such pressure on Ronaldo to score now that it is unsurprising the team is struggling to find their growing rhythm.

There is a saying that you should only be concerned if a forward isn't getting chances, however the 32-year-old is missing chances with those behind the scenes at Valdebebas is pleased there is a problem.

Ronaldo had chances in the Madrid derby on Saturday, two of his late chances saw him pick the ball up inside the penalty area but poor first first touches allowed the Atletico Madrid defenders to close the angle and block his shots.

It was something we have never seen from the Portuguese international before; normally he is so clinical and decisive in his movement.

Obviously, he is not the only reason why Los Blancos are 10 points behind Los Cules; the strange handling of Marco Asensio also hasn't helped.

As soon as he was brought on at the Estadio Wanda Metropolitano, the visitors looked a much better team; they created more chances and put the hosts under pressure.

For Ronaldo to find his form again it is thought that Asensio needs to play more minutes, unfortunately there are those within Real Madrid that feel it is too late to mount a title charge this term, that the derby may have been the club's last chance.

Valencia's youth can trouble stress-tested Barcelona all the way

If any Real Madrid fans are looking for optimism with their side languishing ten points off the top, they need only look at how Luis Enrique's tired Barcelona almost fumbled the league title straight to their rivals in 2015/16.

And Ernesto Valverde is risking the same thing happening again as he hesitates in the face of rotating his side during the first third of the campaign.

However, this time, it doesn't appear to be Los Blancos who will benefit from the Azulgrana potentially dropping off, but Valencia.

Plenty of surprise title challengers have emerged over the years in the Spanish top-flight and Los Che didn't actually be considered a red herring at all, had they not spent the last two years floundering under a number of different coaches.

Now under Marcelino's expertise and with no European struggle to contemplate, Valencia have mustered eight consecutive victories and can drive a stake through the heart of Barcelona's suddenly-touted parade to the title with victory over the leaders next weekend.

The reason why the Estadio Mestalla outfit are unlikely to lose their tempo, in physical terms at least, is their severe youth.

Only Ezequiel Garay is over 30 in the Valencia squad with Carlos Soler and Goncalo Guedes (both 20), Santi Mina and Andreas Pereira (both 21), and Jose Gaya (22) all regulars in Marcelino's thoughts.

In response, Barcelona have their been there, done-that brigade at the forefront of their plans; Andres Iniesta's importance to the side has only increased while Messidependence hasn't promised to end anytime soon.

Perhaps this could lead to complacency, but any team who failed to win either of their two favorite trophies last season would not fall into such traps.

Thus it is a youth versus experience dogfight emerging atop LaLiga and it promises to be a fascinating one to watch. Can Los Che keep their heads? Can the Catalans keep their legs? Sunday's match will give us our first clue.

Barcelona face three finals to seal the title by Christmas

Even many Barcelona fans did not dream of a scenario where the Catalans were ten points clear of Real Madrid at this stage of the season but the reality is that the league leaders can effectively seal the title before the winter break.

After the Supercopa de Espana loss to Zinedine Zidane's side, it appeared summer talk of a post-Neymar crisis would bear fruit, and yet the opposite has occurred.

Juventus are next up in the Champions League and following that encounter, the Blaugrana face Deportivo La Coruna and Celta Vigo at home along with three veritable finals on the road.

First, they travel to Valencia to take on the current challengers at Estadio Mestalla, before a trip to Villarreal's Estadio de la Ceramica a fortnight later.

Finally, the Christmas break is summoned with the final whistle at Estadio Santiago Bernabeu once Barcelona have faced Real in Madrid.

Sergio Ramos: I would bleed a thousand times more for this jersey

After having his nose busted during Saturday night's Madrid derby, Real Madrid captain Sergio Ramos insisted that he would put his body on the line for the cause 1,000 more times if required.

During the first half, a stray boot from Lucas Hernandez caught the Spaniard in the face as he stooped to direct a header at goal.

That kick broke Ramos' nose, causing him to bleed heavily.

After receiving treatment, he saw the remainder of the half out before being replaced by Nacho at the interval.

"I would bleed a thousand times more for this badge and this shirt," Ramos wrote on his official Twitter account.

"Thank you all for the love and support. I will be back in no time. #HalaMadrid."

Kane wants to spend his entire career at Tottenham

"My goal is to play my whole career only for Tottenham," Kane, who is reportedly a major transfer target for the biggest European clubs but whose current deal with Spurs runs to 2022, told the newspaper.

"At the moment, everything fits well for me here and I am happy. We have a fantastic team, a good coach and a professional training center and we are getting a new stadium as well."

Promoting home-grown youngsters into the first team is a matter of pride for coach Mauricio Pochettino, who was equally impressive on that front while in charge at Southampton, but Kane's rise is a particular source of pride for supporters.

The 24-year-old, who arrived at the club as an 11-year-old back in 2004, has also scored five times in the Champions League, with Tottenham having qualified for the knockout stage with two games to spare.

They travel to Borussia Dortmund next week with the Germans all but eliminated from the competition.