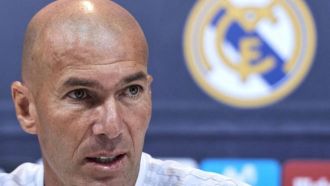 Zidane: I don't want another striker because I count on Mayoral

After training on Saturday morning at Valdebabas, Real Madrid coach Zinedine Zidane faced the media to talk about Sunday's game against Valencia, and admitted he doesn't want another striker to come in before the transfer window closes.

Raphael Varane didn't join the session and Zidane has ruled him out of the match at the Estadio Santiago Bernabeu.

"Varane wants to play, but he has something injury wise," he began.

"I don't want to risk him even if there is no Sergio [Ramos] nor [Jesus] Vallejo.

"The health of the footballer matters more to me."

Though Real and enjoying spectacular success at present, thanks to a continuous high level of performance, Zidane doesn't want his charges resting on their laurels.

"Winning one day doesn't mean that the next game will be easy," he continued.

"We have to keep this winning mentality."

Finally, the Frenchman was asked about more signings before the window closes, particularly in attack, and his response was emphatic.

"I don't want another striker," he said.

"I'm counting on Mayoral and I'm going to give him all year because he's a player that can help us when we need him.

"For him it's a year to learn and be ready when he has the opportunity to play."

Valverde: Compact Alaves' striker was closer to our midfield than our defense

Ernesto Valverde's arrival at Barcelona has coincided with one of the club's most troubling periods in recent memory, yet the Spanish coach has taken six points from his first two LaLiga matches.

Despite that positive start, the 53-year-old bemoaned how compact Alaves played on Saturday by supporting how their front line was closer to Los Cules' midfield than their record.

"Alaves were so compact that their forward was closer to our midfielders than defenders," he explained in his post-match press conference.

"It took a lot to open the scoring.

"There were stuck within a 15-meter space and it meant that sometimes we were so close that there were as many as 18 players in such a small space."

It was a Lionel Messi brace that did finally get Barcelona off the mark and Valverde was pleased that the Argentine will have some more help with the arrival of Ousmane Dembele.

"We will have a more competitive team," he said of Dembele's signing.

He also said that the Blaugrana are "open to" the idea of ​​making more signings before the end of the transfer window.

Messi's first penalty of the LaLiga season is saved by Pacheco

A foul on Gerard Pique saw Carlos del Cerro Grande point to the spot, but the Argentine couldn't score with his first attempt from 12 yards of the 2017/18 LaLiga season.

While he beat Keylor Navas from the spot in the Supercopa de Espana, this would have been the No.10's first league goal of the campaign, yet Pacheco dived to his right to push the attempt away.

The Argentine did, however, open his account after the break.

Manchester United manager Jose Mourinho saw all three of his substitutes contribute to the goals that earned a 2-0 win over Leicester City on Saturday but was quick to dismiss praise of his tactical move.

Marcus Rashford scored the opener three minutes after coming on and Jesse Lingard and Marouane Fellaini combined for the second goal to complete United's third straight win of the Premier League season.

"Very good players," Mourinho said, when it was suggested that he had made intelligent substitutions.

"This is about the quality of the players because they are good. It doesn't matter if they come from the bench because the group is solid.

"I am really happy. Not for me, when we make changes, it is always the right changes. I am happy for them, for Marouane, for Jesse, for Marcus," he said.

"If I don't have them say on the bench I can't make successful changes. The players work hard and those who are not playing and are on the bench, or in the stands, are working hard too and waiting for the chance, "he said.

It was the kind of game that United might have drawn last season.

"We didn't have many matches last season where we played 90 minutes with the control we had today. Is (Jamie) Vardy a very dangerous player? I would say one of the most dangerous in the Premier League. Was he dangerous today? I would say no because we played very well to control that, "Mourinho said.

The former Real Madrid and Chelsea manager said his fighting excellent start to the season - with 10 goals scored and three clean sheets - was a result of excellent preparations.

"We had a very good pre-season. We worked really well. We had great conditions to work together, to be together in a beautiful atmosphere in Los Angeles.

"We played against good teams, the best team in Europe (Real Madrid) twice. The pre-season was very complete and then we started the Premier League and we are playing well," he said.

The Argentinean forward faces a police probe after a Vitality Stadium steward said he was the victim of aggression during the last-minute melée.

Manchester City forward Sergio Agüero could find himself the subject of a police investigation after a steward at the Vitality Stadium ruled Argentina international hit during the wild celebrations following Raheem Sterling's winning goal as Pep Guardiola's side eked out a 2-1 Premier League victory against Bournemouth .

Agüero was seen to square up to security guards and a police officer at the tail end of the match on the South Coast and the constabulary later took a statement from a Bournemouth steward who had been on the receiving end of a punch from the City. striker during the visiting side's celebrations after Sterling's 97th-minute decider. After the goal, Agüero and his teammates made for the stands and the ground's security contingent were forced to intervene.

Sterling was sent off for his over-exuberant reaction to hitting the back of the net and the game finally ran into a 100th minute after the restart due to the incidents following the goal.