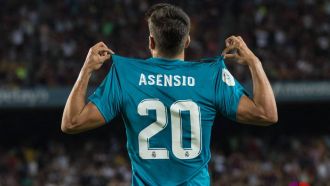 Marco Asensio is a diamond

A debut in a new competition generally means a goal for Marco Asensio, and so it proved again in the Supercopa de Espana; the youngster was a diamond that continued to sparkle for Real Madrid.

On Sunday, another, far from ordinary, goal was dispatched to put the gloss on a commanding performance from Los Blancos.

It was a strike to give the title to Madrid, unless Messi says otherwise at the Estadio Santiago Bernabeu.

Zinedine Zidane knows that Asensio has to be pampered, to be given minutes on the pitch, and certainly more minutes than last season.

The player has earned it with his performances and, after the departures of Alvaro Morata and James, is closer to the starting line-up than ever before.

Though the coach started the game against Barcelona by using Karim Benzema and Gareth Bale in attack, the truth is that Real improved immeasurably when Cristiano Ronaldo and Asensio came on.

The latter has the world at his feet, and now is the time to let them do the talking

"The new Barcelona player will sign for the next four seasons (and) the player's buyout clause is set at 120 million euros," Barcelona said in a statement.

"Paulinho will undergo a club medical on Thursday (when) the signing of the contract and his official presentation will also take place."

The 29-year-old is Barcelona's first signing since the Spanish giants sold Neymar to Paris St Germain earlier this month for a world record of 222 million euros, with the Catalans still looking to make further reinforcements.

Liverpool's Philippe Coutinho and Borussia Dortmund's Ousmane Dembele have both been targeted by Barcelona as they search for a player capable of replacing Neymar's spark on the left of the attack.

Coutinho has handed over a transfer request at Anfield.

Barcelona have had two bids rejected for Coutinho and are poised to return with a third offer, according to reports in Spain.

The arrival of Coutinho's Brazil team mate Paulinho will allow Barcelona to add more muscle and energy to a midfield which struggled to keep control of games last season.

"Paulinho is a player who stands out for being a powerful midfielder at 1.82m tall who can get into the box and play anywhere in the middle of the park. He has plenty of experience in the game on various continents," Barcelona added.

Paulinho failed to make an impact in the Premier League with Tottenham Hotspur after joining from Corinthians and departed to Guangzhou Evergrande in 2015 for 14 million euros.

While in the Chinese top flight Paulinho found his best form, scoring 25 goals in 95 games for Guangzhou, and earned a recall to the Brazilian national side.

Following his sensationally mixed cameo on Sunday evening, Cristiano Ronaldo has been informed of his fate and he will be suspended for five matches.

A decision not expected until Wednesday however the competition's committee committee has decided to hand Ronaldo a one match ban for his red-card on Sunday whilst a further four match suspension has been placed on top of that.

This is of course due to Ronaldo's shove on referee Ricardo de Burgos Bengoetxea after he was shown a second yellow-card.

For a violation of Article 96 of the Disciplinary Code, Madrid must pay an additional fine of 1,400 euros and the player one of 3,005 euros.

Ronaldo will miss the second leg of the Supercopa and the LaLiga games against Deportivo, Valencia, Levante and Real Sociedad.

Real will now appeal this decision within the next ten days.

It was almost the perfect evening for Zinedine Zidane as he watched his far superior Real Madrid team ease to a 3-1 victory over Barcelona at the Camp Nou, however Cristiano Ronaldo is in hot water following his red card though Los Blancos will appeal the second yellow which led to sending.

Quite simply, it was a bizarre cameo from the 32-year-old as he wasn't even on the pitch half an hour before he had scored a goal, he was yellow carded twice and then pushed referee Ricardo de Burgos Bengoetxea.

The manner in which he received the cards has frustrated those inside Real Madrid for a number of reasons.

For a start, no matter the circumstance picking up a caution for taking your shirt off in celebration of a goal is always a cheap yellow card.

Ronaldo's attempt to recreate Lionel Messi's infamous gesture at the Estadio Santiago Bernabeu from last season backfired spectacularly as he was shown a second yellow card for a perceived dive just minutes later.

Replays would later show there was contact between him and Samuel Umtiti, not enough for a penalty but certainly enough to force the forward to take an involuntary tumble.

What happened next is the real story as the former Manchester United star decided angrily to the decision and pushed the official, an offence which could land him a suspension of between four and 12 matches.

Possible ramifications of this act will be known on Wednesday but for now Los Blancos intend to appeal against the decision to show him a caution for simulation.

Bengoetxea's post-match report made clear that all incidents involving Ronaldo had been noted.

Article 96 of the laws refers to the 'grabbing, pushing or shoving' towards referees and officials, and it is clear that a sanction of up to 12 matches is indeed possible.

The best case scenario for Real Madrid's talisman is a four match suspension which would see him miss out on matches against Deportivo La Coruna, Valencia, Levante and Real Sociedad.

Asensio represents the big difference between Real Madrid and Barcelona

Zinedine Zidane was very clear when he first saw Marco Asensio training that he wanted him for the Real Madrid first team, it didn't matter that he was just 19 years old at that time because he clearly had the talent to define an era.

The player has responded with great play and decisive goals and perfectly encompasses the difference that exists today between the current Real team and Barcelona.

One wins titles, the other loses them.

One signs players that are young, hungry and talented whilst the other loses players that they said were going to be Messi's successor.

Real have a balanced squad but Barcelona have no clear direction.

On Sunday night, Asensio produced another stellar performance and silenced the Camp Nou as only the best players are able to do.

He scored a goal that will bring the Supercopa de Espana to Real Madrid and struck a blow that can be definitive to a Barcelona full of doubt and which has led players like Busquets to request reinforcements publicly.

Zidane has always believed in Asensio and the Frenchman, who knows a little bit about football, told him that he hadn't seen a left-footed player as good since Messi.

That prediction, and the patience of the Mallorcan, are the ingredients which are seeing Asensio well on the way to becoming a world-class exponent.

The leaders of Real Madrid, that is the sports management and Zidane himself, have stopped possible signings because the youngster and his teammates are a group that are well above a Barcelona that depends solely and exclusively on the inspiration of Messi for everything.

Whether Asensio fulfilled Zidane's prophecy remains to be seen, but his is a trajectory that continues upwards.