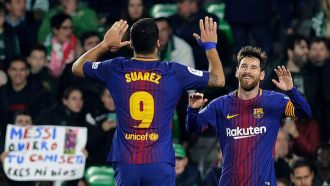 The second half is where Barcelona are strong

One of the hallmarks of Barcelona's season has been their performances in the second half of matches.

Ernesto Valverde's team wears their opponents down in the first half and then strikes in the second, which was exactly the formula for Sunday's 5-0 victory with all of the Blaugrana's goals coming in the second half.

What happened to Real Betis was exactly what we have seen on so many occasions this season, especially when the match is away from the Camp Nou.

Both Real Madrid and Real Sociedad have fallen victim to the Catalan giants' game plan of late, the balance of these three matches is that Barcelona have scored 12 goals with 11 of them coming in the second half.

The pressure is built up due to the attacking talent in Valverde's squad; Lionel Messi and Luis Suarez have excelled in front of goal of late even in the absence of Ousmane Dembele.

They have built up a strong lead in the standings, 11 points is a significant gap and it doesn't look like the club are going to slow down any time soon, especially with Philippe Coutinho still to debut.

In Samuel Umtiti, the Spanish coach had a difficult decision to make with regards to Thomas Vermaelen; the Belgian has been in such good form and was kept in the team.

He did though suffer an injury and it's likely Umtiti will come straight back into the team, taking the decision out of Valverde's hands.

Worries that a Barcelona stroll to the title will be boring to watch are not on Ernesto Valverde's mind after his team's latest big win en route to reclaiming their LaLiga crown.

A 5-0 romp past Real Betis on Sunday night has them 11 points clear following a weekend in which their immediate rivals once again lost ground.

"For us it won't be a boring league," he told reporters. "We will continue trying to win our matches, without speculating about the future.

"There are 18 games left and that is a lot. But, every game we win will be a very big step."

Lionel Messi was on scintillating form in Andalusia and Valverde commented that he has been able to witness the Argentine from both sides of the coin.

"You have to enjoy him," said the coach. "We have been able to live his era.

"I have suffered because of him and I know what that is like. Now I can enjoy it.

"It is an event to watch him every day. He is the best player there is and there ever will be."

Making a surprise appearance off the bench on Sunday was Gerard Deulofeu and Valverde was open as to why the winger played despite speculation he will leave, while also attending to talk of Barcelona's interest in Betis star Fabian.

"I don't know what will happen with Deulofeu," he admitted.

"His introduction was in the same context as Rafinha's at Espanyol. I thought in both cases that they could help us in the game.

"I think [Fabian] is a good player who played well. He pressured us well. This is his first LaLiga campaign and he has been one of the surprises of the season."

Zidane: Real Madrid's players needed a match like that

With Real Madrid's domestic season having slipped to some low depths in recent matches, Zinedine Zidane was pleased for his players to have finally bagged a big win like the one seen in Sunday's 7-1 victory over Deportivo La Coruna.

The Galician side took the lead at Estadio Santiago Bernabeu however the hosts quickly regained their composure and were dragged to a heavy victory by the goalscoring exploits of Gareth Bale.

"The players needed a game like this," Zidane explained in his post-match press conference.

"I don't know if the team has changed too much, the result though is very heavy, that's the difference.

"We played well against Villarreal and we did today, even at 1-0 down, I'm happy today."

With senior members of the attacking unit back fit, the French coach was able to switch to a 4-3-3 formation although he believes the attitude his team showed was more important.

"As always, we can play in many different ways, today it has been like that and it worked for us," he intimated.

"We have changed system many times this year, but the most important thing is our attitude.

"I don't know how long it's been since we scored so many goals at the Bernabeu, I'm happy for everyone."

Gareth Bale's injury problems have kept the Welsh international out for much of the campaign, his contribution on Sunday was fantastic and it showed just how much he has been missed, something the former Juventus midfielder noticed.

"I want to have all my players fit, we still are missing players," Zidane admitted. "This is football, sometimes there are players who are injured.

"I'm happy for Gareth because he should now be able to play regularly and find consistency."

With the visitors taking the lead, it was expected that Los Blancos could fold again, such has been the pressure on the team of late, however Zidane's charges showed resilience and bounced back in spectacular fashion, something which the coach believes shows the value of taking chances.

"It was a good reaction, then with two goals we could start to play as we wanted," he confirmed.

"We weren't playing too freely in the last matches, especially at home. Today we saw what can change when we have taken our chances."

Bale: There are still big matches to come and I want to play in them

One of the most encouraging aspects of Real Madrid's 7-1 victory over Deportivo La Coruna for Zinedine Zidane was Gareth Bale's performance, he scored a brace and showed his talent with the Welsh international confirming he wants to be involved in the club's big matches this season.

Bale has missed much of the campaign yet Zidane has always trusted him, when fit he is one of the guaranteed first names of the team sheet and he showed just why on Sunday.

"There are still many big matches to come and I want to play in them," he explained in his post-match interview.

"I feel good, I'm still not 100 percent, but little by little I will get into the best state possible.

"I'm happy to be playing again and I want to continue to improve."

Whilst he's been on the receiving end of significant criticism due to a lack of fitness, Bale's form when he has played this season has actually been impressive and the former Tottenham Hotspur star is convinced the team is improving.

"I think we'll recover, little by little we have to keep working and winning," he admitted.

"In the league we need to be realistic. However, we never give up and we have to start winning games."

Karim Benzema, Cristiano Ronaldo and Bale have barely played together this term, yet Sunday's 7-1 victory saw the trio reunite on the pitch, something which Bale enjoyed.

"When you go back to playing with Karim and Cristiano, it's easy to feel happy," he intimated.

"I'm glad to play next to them and help the team score goals."

Maradona: I don't think Cristiano Ronaldo is the best player in history, not at all

Many will argue that Cristiano Ronaldo is the best player ever, but Diego Maradona doesn't agree with that point of view.

The Real Madrid forward is level with Lionel Messi in terms of Ballon d'Or wins, with five each, but Maradona believes the player still has work to do.

"Everybody has the right to say what they want and I don't think Cristiano Ronaldo is the best player in history," the Argentine said in an interview with Telesur.

"But I do respect the career he is having.

"He has a long way to go from this point to the point where we talk about him as the best ever."

Ronaldo has spoken about wanting to win seven Ballon d'Ors, but it remains to be seen if he'll achieve that and if that'll satisfy Maradona.