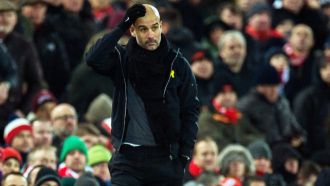 Guardiola: It's absolutely normal to lose

After a classic encounter at Anfield in which Manchester City lost by the odd goal in seven, Pep Guardiola was philosophical about his team's first defeat of the season.

Liverpool were rampant in the second half but the visitors almost drew level with a late flourish.

"Each team is fighting for something and losing is absolutely normal.

"People asked me if the league was done before Christmas and it's not like that, we have to do a lot more to be champions."

"This is our first defeat, the bad news is that we lost so I want to congratulate Liverpool for their game," he continued.

"We knew they were a good team and we were not good with the ball or in recovery.

"We lost a bit of control."

Moving forward, Pep hoped his youngsters would learn from the loss.

"We have to learn, we are a young team and we were punished for our mistakes," he said.

Real Madrid are closer to relegation than they are to Barcelona

It seems as though the good times at Real Madrid have come to a halt, and with Barcelona winning against Real Sociedad on Sunday, Los Blancos are now closer to relegation than they are to their fiercest rivals in the LaLiga table.

As a consequence of Sunday's contrasting results, the gap between the two teams is now 19 points.

Zinedine Zidane's players no longer loo like mounting a credible title challenge, but rather ways to stay in the top four.

With the first round of matches now complete, the feeling within the Los Blancos camp couldn't be any worse.

They have lost four league matches and have had five draws, and have recorded seven fewer victories than the Blaugrana.

Of course it must be remembered that the defending champions have a game in hand to play against Leganes, although they have shown worrying signs of weakness in recent matches.

It's often said that where Real Madrid are concerned you can never rule anything out, however with Valencia and Atletico Madrid both ahead of them, it's incredibly unrealistic to think they will put together a run to get them anywhere close to the top.

The reality is that their battle is now with Sevilla and Villarreal to secure a Champions League spot for the 2018/19 season.

Villarreal are only a point behind Real whilst the Andalusian side are three adrift.

Valverde: I'm happy for having taken away the Anoeta curse

For once, Barcelona come away from the Estadio de Anoeta with a win, and Ernesto Valverde was happy to have broken the curse that had seen the Blaugrana not win there in the league since 2007.

Coming back from two goals down, the victory rightly ranks as one of Barcelona's best in the league so far this season.

"You can lose points at any stadium," he said in his post-match press conference.

"I am happy that we have taken away this curse, especially because of how we did it, being two goals down."

Still unbeaten after 19 games, Valverde let the press into his secret.

"Above all, we don't think about big things," he continued.

"We go step by step in the dressing room, maintaining common sense and balance.

"We want to continue along the same lines but I think we can do better."

Dropping Andres Iniesta to the bench would've been picked up on had Barcelona lost, and as it is Andre Gomes, his replacement, did little.

"We have many games now, it was also a game with special connotations," Valverde noted.

"With the heavy field, with time... I thought it was better that Andre Gomes helped us because they had a very powerful right winger."

Now 19 points behind, Real Madrid still haven't been ruled out of mounting a challenge by Valverde.

"We have only lost six points and we are very happy, but we never discard our rivals."

Celta Vigo have released a statement in which Iago Aspas denies having called a Levante midfielder "black s**t," after racism accusations following Sunday's clash between the teams.

Pione Sisto's winner was decisive but many of the post-match headlines were taken up by the accusations from Jefferson Lerma.

"That's why I won't repeat what he said to me.

"In any case, I didn't call him what he says I called him."

After the victory of RC Celta over Levante at the [Estadio] Ciutat de Valencia, the Celta Vigo player Iago Aspas has been accused of, allegedly, directing racists comments to another player from the Valencian team during the game.

The striker of RC Celta has responded to these serious accusations through the club.

"What is said on the pitch, stays on the pitch. That's why I won't repeat what he said to me. In any case, I didn't call him what he says I called him," Iago Aspas said.

RC Celta wants to insist their strong support for fair play and respect between rivals, equally on and off the field, values that are key to the identity of the club and that are put into practice day to day in each and every team within the club, from the youth team to the first team.

Wasteful Real Madrid: 29 shots and no goals... What happened to their punch?

How many games have Real Madrid won playing badly? Now it's just the opposite with Los Blancos lacking any sort of punch from their attacking intent.

Zinedine Zidane rewrote the script in Cardiff, winning the twelfth Champions League and so completing a double not seen in Madrid since 1958...

This season, he's writing another story entirely, thanks to the countless chances that are being thrown away.

The Frenchman can't explain the crisis, but points to a lack of marksmanship, and the situation that the European and league champions are experiencing is incredible.

Especially at the Estadio Santiago Bernabeu, where Real have sent balls wide, into the stands, off of the woodwork or into the hands of the opposition goalkeeper.

Neto, Raul, Adan... Asenjo is just the latest 'best goalkeeper in the world.'

Against Villarreal, Los Blancos had 29 shots, the same number as against Las Palmas (3-0) and Betis, the latter ending with a result that was the same as was seen on Saturday.

It may be an unjust punishment, but football is like that.

If you don't score, you're doomed.

Of the 29 shots against the yellow submarine, seven were on target, one hit the woodwork, and apart from those that flew off target, the rest were comfortably dealt with by Asenjo.

At the halfway point of the championship, it's striking that Madrid's top scorer has only four goals. FOUR GOALS!

They explain the crisis of a Real Madrid team that is incredibly wasteful.

Matches played at the Bernabeu

Email : [email protected]
Προηγούμενο : Zidane: The danger is there but I'm not going to change, I know how to react | Επόμενο : The second half is where Barcelona are strong
Προβολές : 539
- 8417 προηγούμενη ημέρα