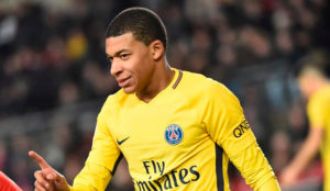 Fresh from being crowned the best young player of 2017 in France, Paris Saint-Germain forward, Kylian Mbappe, believes his team can overcome Real Madrid in next February's Round of 16 Champions League tie.

He made the claim in an interview for French television.

"Of course PSG can beat Real Madrid, if we don't believe it, who will?," he said on the football TV show Telefoot.

"We know it won't be easy, we will work until February to be ready when the time comes."

The 18-year-old superstar revealed that he wasn't unhappy when Real were drawn to face the French champions.

"I reacted in a very natural way," he said.

"I think that to win the Champions League you have to face the best teams and Real Madrid is one of them.

"It will be a great game, it's up to us to show all the qualities we have."

He refused to be drawn on competing against Ballon d'Or winner Cristiano Ronaldo.

"The main thing is the game," he continued.

"I represent France because we are the only French club left in the competition, so the personal duels are secondary.

"The most important thing is qualifying."

Ramos: Zidane? It's rare that good players are good coaches

Before traveling to Abu Dhabi, Sergio Ramos analysed a number of things to do with Real Madrid and European football, and one thing the captain was clear about is that Zinedine Zidane is the best coach around.

He also refuted any criticism of striker Karim Benzema.

"Zidane is the best, without any doubt," Ramos said on the 'Telefoot' program on French TV channel TF1.

"We are very happy that he is our coach because with him there is continuity, and it's rare for good players to become good coaches - but he did it."

Benzema has come in for some stick in various quarters but Ramos preferred to concentrate on what he brings to Los Blancos.

"Karim is a very good striker, with qualities and innate talent," he continued.

"He's a scorer and creator and he can cause problems for any defender.

"Playing for your country is the biggest honour for a player, and I know Karim would be happy to be able to represent France in the World Cup."

Ramos also had words of praise for two other strikers.

"Our No.7 is a striker like we have never seen before," he said.

"He is already a legend and will be recognised as one of the best players in the history of football.

"Cristiano Ronaldo has a very important role in the team everyone respects it.

"Kylian Mbappe is a great player, very young but with an extraordinary future.

"He always makes a difference and we will have the chance to face him soon."

That chance will arrive in the Champions League Round of 16 tie when Real face Paris Saint-Germain, in a competition that Ramos believes is is part of the club's DNA.

"Of course, I would like to win the Champions League for the third consecutive time, but there are other very good teams: Barça, PSG, Bayern..." he noted.

"PSG has been strengthened in order to win a title like the Champions League, but we will see.

"Winning it is part of the DNA of Real Madrid."

Barcelona won't give Real Madrid a guard of honour

Guillermo Amor, director of Institutional Relations at Barcelona, confirmed that the team would not be giving Real Madrid a guard of honour before El Clasico next Saturday.

There is a precedent already this season as Real won the European Super Cup at Manchester United and there was no guard of honour in the next game; the Supercopa de Espana that was played at the Camp Nou.

"In this club, the guard of honour is usually made when we participate in the Champions League or LaLiga... and this is not the case," Amor said after Barcelona had comprehensively dismantled Deportivo la Coruna.

It did happen in 2008 in a Clasico that went down in history, as the Catalans had to honour Real for becoming league champions.

Amor: Bartomeu meeting with Griezmann's family? There may have been an approach

With the January transfer window just around the corner, Guillermo Amor has refused to rule out a move for Antoine Griezmann, Barcelona's director of sporting relations suggesting that Josep Maria Bartomeu's meeting with the Frenchman's family could be the sign of an approach.

The French forward has rediscovered his form with Atletico Madrid of late, however it's clear he is ready for a move.

"If Bartomeu met with Griezmann's family as the newspapers say, then there may well have been an approach," he explained in an interview with Movistar.

"Though, I don't know anything for sure."

The Spaniard went on to mention how rumours are now part and parcel of modern football, despite the fact most transfers happen in cordial conditions.

"There is a good relationship, there can also be comfortable conversations," he admitted.

"Rumours are inevitable in the football world.

"In Griezmann's case there are many people we talk to; it's our obligation to have contact with players."

Barcelona arrive at the Bernabeu with third highest advantage in history

It was always known that Real Madrid's participation in the Club World Cup would see them miss domestic fixtures, however given the state of play in LaLiga the current leaders, Barcelona, head into the Clasico with their third highest ever points advantage over their rivals.

Despite Real Madrid having a game in hand, the gap between the two teams is currently 11 points, and there have only ever been two occasions where the gap has been as big heading into a Clasico.

In the 2012/13 season, Barcelona arrived at the Estadio Santiago Bernabeu with a 16 point lead over Jose Mourinho's team, although on that occasion Los Blancos were victorious.

Prior to that, you must look back all the way to 1991 when Johan Cruyff's charges faced the Madrid side on the last day of the season.

Real Madrid sat a grand 13 points adrift of their fierce rivals and were forced to make a guard of honour for the champions.