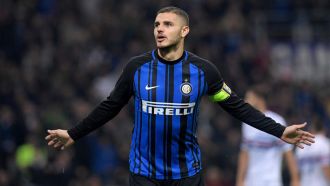 Real Madrid are keeping a close eye on Inter captain Mauro Icardi, who has scored 13 goals in 13 appearances this season.

Former Milan player Daniele Massaro said on Tuesday that the Argentine could be a replacement for Karim Benzema, comments which are likely to be well informed.

"I can tell you that, next year, Icardi will be at Real Madrid in Benzema's place," he told Premium Sport.

While Real Madrid consistently monitor a whole host of players on the continent, it is true that Icardi - a former Barcelona youth teamer - is one of the names on Los Blancos' list.

The forward, who is on a contract which runs until 2021, would cost around 100 million euros and he would be eligible to feature in the Champions League knockouts if signed as early as January.

Though Lionel Messi's absence from Barcelona's starting lineup against Juventus was a surprise for many, coach Ernesto Valverde suggested the player needed a rest.

With a huge LaLiga fixture against Valencia upcoming, the Argentinian was kept in reserve until the second half.

"Leo has played a lot of matches and needed to rest," Valverde said after the match.

" He came on in the second half, with everything more open.

"These are internal things that the coach handles."

A 0-0 draw allows the Catalans to finish top of the group, a case of job done for the Blaugrana coach.

"I have a good feeling about it," he continued.

"We finish first and we played with personality and dominated."

Marc-Andre ter Stegen was Barcelona's hero yet again with a stunning stop from Paulo Dybala late on to ensure a share of the spoils.

"He is in a great moment of form," Valverde noted.

"Although our intention is that he doesn't have to stop so many.

"Yes, he made a decisive stop because if Juve had scored then, they would've won the match."

Griezmann: Atletico will try until the end

After scoring one and making the other in a 2-0 win over Roma, Atletico Madrid striker Antoine Griezmann remarked how the Rojiblancos were going to give it their all in the final Champions League group game.

It was imperative that Atleti got the victory on Wednesday night, to at least give them hope of qualification to the round of 16, though that is still not a foregone conclusion.

"We're going to try until the end," he said.

"It was important to win and then we'll see."

A stunning scissor kick from the Frenchman opened the scoring, ending his goal drought.

"I'm happy to have scored," he continued.

"Happy for my teammates, that's how I help them.

"I try to give the best of myself, but we have to work and keep working."

Lille coach Marcelo Bielsa has been provisionally suspended by the club, the Ligue 1 side in a statement on Wednesday that gave no further details.

Lille are second from bottom in Ligue 1 after losing seven of their first 13 games in the league this season.

Bielsa, who coached Olympique de Marseille in Ligue 1 in 2014-15 before resigning after the first game of the following campaign, was named Lille coach during the close season.

The 62-year-old has previously managed the Argentina and Chile national teams and a host of clubs including Athletic Bilbao and Lazio.

After having praised each other in the build-up to the Champions League clash between Juventus and Barcelona, Gianluigi Buffon and Ivan Rakitic shared a warm greeting on Wednesday evening.

The positive vibes between the pair stem from Italy's failure to qualify for the World Cup and how the Croatian midfielder reacted to the veteran goalkeeper missing the tournament.

"I want to give him my place," he explained in a press conference.

"I want to tell him to go to the World Cup instead of me.

"One wants to cry when you see Buffon in tears, words can't describe that feeling."

The Italian stopper saw these sentiments and actually took the time to respond to Barcelona's midfielder on Twitter.

"As a goalkeeper I could still play, but playing for Croatia in midfielder might not be a great idea," he intimated.

"I say this for your own good.

"Jokes aside, your words have been a great gift, my shirt is waiting for you."

Everton striker Oumar Niasse became the first Premier League player to be retrospectively banned for simulation after the FA rejected his appeal against a charge of "successful deception of a match official" in Saturday's game at Crystal Palace.

The 27-year-old fell under minimal contact from Palace defender Scott Dann in the fifth minute to earn a penalty, converted by Leighton Baines, and has been banned for two matches, the FA said in a statement on Wednesday.

"Everton's Oumar Niasse will serve a two-match suspension with immediate effect after his denial of an FA charge of 'Successful Deception of a Match Official' was rejected," the FA said.

The Senegal international will miss Everton's games at Southampton on Sunday and at home to West Ham United on Nov. 29.

Everton caretaker manager David Unsworth believes Niasse was fouled by Dann and said the FA's charge could set a dangerous precedent for debatable decisions in the future.

"He (Niasse) was shocked and I was shocked," Unsworth told a news conference.

"My view won't change. Contact is contact. Anywhere on the pitch, it's a foul. I think these people will be very busy if that's going to be the case. You will have to look into every foul across the board.

"It's a dangerous precedent that could be set if decisions go against you that are debatable."

The new law allowing retrospective punishment for simulation was introduced in May.

While Niasse is the first Premier League player to be suspended under the law, Bristol City defender Bailey Wright was banned for two games this month after being found guilty of simulation in an off-the-ball clash with Fulham's Aboubakar Kamara during a Championship (second-tier) fixture.

Aboubakar was initially shown a red card after Wright fell theatrically to the ground but it was later rescinded.

Marcelino to serve a touchline ban against Barcelona

The coach was sent to the stands last Sunday during Los Che's 2-0 victory over Espanyol.

Valencia are expected to appeal the ruling in order to try to reduce the punishment.