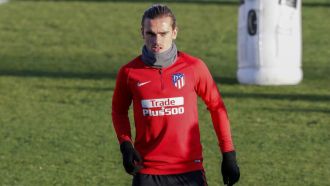 Griezmann: The derby is very important and Atletico have to win

Ahead of the upcoming Madrid derby, Antoine Griezmann spoke about the highly anticipated match and the importance of securing the three points at home.

The Atletico Madrid striker also opened up on what his team must improve on.

"It's a game to win, in the new stadium people will come into it with great enthusiasm," he said in a recent interview with LaLiga.

"It is a very important game for the fans and for the club."

Diego Simeone's men are set to face Real Madrid at the Estadio Wanda Metropolitano and the Frenchman explained why the Madrid derby is always a learning opportunity.

"These are very nice games to play in, where I always try to help the team," Griezmann indicated.

"They are very important games when you win and also when you lose because you always learn something."

Lastly, Griezmann talked about his side's current form leading into the clash.

"We are having problems," Griezmann admitted.

"During the week in training, the goals flow easily but then in the game not so much, but we have to continue working, believing in the coach and our teammates.

"Defensively we are well and we only need luck in the front. We have to work and improve."

There is tension between the two most senior players at Real Madrid as Cristiano Ronaldo and Sergio Ramos continue to take their disagreements to the airwaves.

With results not coming out perfectly for Los Merengues in the early stages of the season, both have faced many questions as to why all is not well and it is reported that the Portuguese winger's assessments have sparked a war of words.

Following Real's loss to Tottenham Hotspur in the Champions League, Ronaldo made a rare statement in the mixed zone to attribute the club's downturn to a loss of experienced players over the summer; namely James Rodriguez, Pepe and Alvaro Morata.

While this point of view was mulled over by fans and commentators, Ramos' opinion was a clear rebuttal and El Chiringuito claim that the defender was considerably irked by his colleague.

Stating that Madrid won two Super Cup competitions at the start of the season without any supposed lack of experience affecting their performances, the club captain added to the tension in their relationship that has not healed in the proceeding weeks.

Over the summer, a notable shift has taken place in the Real dressing room as those departing were key allies of Ronaldo. Among those leaving included countrymen Pepe and Fabio Coentrao and good personal friend Rodriguez.

Meanwhile, Spanish centre-back Ramos has more credence with the increasingly youthful, native squad that Zinedine Zidane now has at his disposal; players such as Nacho, Dani Carvajal, Marco Asensio, Isco and Dani Ceballos would not dare say a word against the defender - an honour not bestowed upon Ronaldo.

Furthermore, recent comments by Ramos in the media are said to have been seen by the talismanic forward as rubbing salt in the wounds.

First it was the Andalusian's open courtship of Neymar to join Los Blancos, which would provide direct competition to Ronaldo, and most recently it was his shrug of the shoulders as he faced questions on his teammate's future.

"Cristiano is leaving? Ask him, I don't know about these things," Ramos remarked after Spain's draw with Russia, in a tone which has not gone unnoticed by the four-time Ballon d'Or winner as tensions rise in the capital.

Just days after losing 1-0 to Sweden in the 2018 World Cup play-offs, Italian national team coach Gian Piero Ventura has been dismissed from his post.

While the much-maligned 74-year-old is set to hold onto his job, the coach has been sacked after 18 months in the dugout, in which time he led the Azzurri to second in their group before failing to reach the tournament in Russia.

Ventura was always likely to be the man sacrificed by the FIGC given that Italy had reached every World Cup since 1958 and many were in agreeance that his policy of not selecting younger players was reason enough for him to go.

However, others are calling for a more root-and-branch approach to changing Italian football at this time and attention will now turn to who is to take charge of the Azzurri, with Carlo Ancelotti the bookmakers' favourite ahead of Antonio Conte and Roberto Mancini.

Michel: I take a lot of responsibility

There can be few arguments made to suggest that Malaga are not in a crisis situation at this very moment and a disastrous start to the LaLiga campaign has left them rock-bottom after 11 matches, but though the supporters are deeply unhappy, coach Michel has made clear he shoulders a lot of the responsibility for the current issues.

A return of just four points is far below what Malaga had expected to achieve and there have been repeated calls for the Spanish coach to be dismissed, yet the club's owners have been crystal clear on refusing to bow to pressure on this matter.

"I take a lot of responsibility for the problems," he explained in an exclusive interview with Radio MARCA.

"My team can't only have four points and I escape any criticism.

"Sometimes I get angry, but I am always very direct with my players."

Irrespective of the rather bleak position the Andalusian club find themselves in, Michel does not believe there is any room for negativity within the dressing room, be that from himself or the playing staff.

"I am a positive person," he confirmed.

"In the position we are in, I can't afford to be negative or pessimistic because it would transmit to the players.

"What we must do is learn from our mistakes and know how to deal with similar situations in a better way."

The mood around the club has been a toxic one at times this term, it always is when a large portion of a fan-base wants the coach dismissed.

Performances have been adversely impacted by this tension, something that hasn't escaped the 54-year-old's attention.

"In the last few matches we have shown more consistency," he admitted.

"Before we had a hard time thinking who could start matches, now we have six or seven key players.

"It's difficult for the players to execute their ideas because there is a lot of tension, it prevents them expressing themselves."

One of the problems that has carried over into the season was a lack of investment in the summer transfer window.

Michel didn't get all the players he wanted and as such is refusing to be drawn into thinking about the winter market just yet.

"There is two months before then, I am not interested now," he intimated.

"I am involved today and looking for solutions with what we have available.

"My obligation now is to get the most out of every single player, it is my job as a coach."

Liverpool manager Klopp admitted to hospital due to illness

"Juergen Klopp has attended a hospital appointment today as a precautionary measure, after feeling ill," the club said in a statement.

"He is being assessed by doctors and will be absent from training on Wednesday as a result."

No details were given about Klopp's illness but the club confirmed the 50-year-old German is expected to be released on Wednesday evening and may require further check-ups.

Liverpool host Southampton in the Premier League on Saturday.