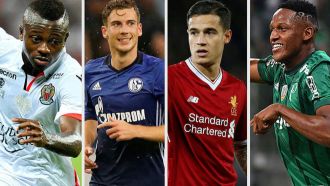 While new arrivals Nelson Semedo and Paulinho have been performing well so far this season, Barcelona still have plenty of work to do to try to solve the outstanding issues of what was a very tough summer.

In losing Neymar and failing to land Marco Verratti or Philippe Coutinho, many members of the Blaugrana fanbase were disappointed by the summer business, even if there wasn't sufficient fury to force a vote a no confidence.

The club's board have survived the motion brought by Agusti Benedito, but they cannot relax yet, as the winter transfer market is their next test and it is just around the corner.

These are some of the issues which must be resolved once the January market opens.

Barcelona tried to offload Arda Turan during the summer window, given that Ernesto Valverde doesn't plan to use him much this season.

There was an opportunity for the Turkish midfielder to return to former club Galatasaray, but he declined that offer in order to see out his contract, which runs until 2020.

This is a tricky situation which needs to be solved.

A deal for Yerry Mina to join Barcelona for nine million euros is in place, however the arrival date remains up in the air.

The initial idea is for him to stay with current club Palmeiras until next summer and it would only be in the case of injury that his transfer would be brought forward to January.

Marco Verratti was one of Barcelona's main targets for 2017, but he didn't come and they are still looking for a player of his profile.

Jean Michael Seri was close to joining in the last transfer window, before that option was thrown out, although he may yet be set for a move to the Camp Nou.

Schalke's Leon Goretzka is another player to have piqued interest at the Camp Nou and, given that his contract expires in June, this is a deal the board could need to start working on soon.

Coutinho is still on Barcelona's radar, even if they couldn't prize him away from Liverpool, despite his handing in of a transfer request.

There is still hope that he could move to Catalonia, even if it's considered "very difficult" for him to arrive in January.

Furthermore, he would not be able to play for Valverde in the Champions League, having already represented the English side in the competition.

Cristiano Ronaldo has suffered a tough start to the current LaLiga campaign and has failed to score in his first three league appearances of the season for the first time in his Real Madrid career.

However, the calendar has been turned over to October, a month in which the Portugal captain normally performs impressively well.

On six occasions, he has scored an October brace, while has also scored four hat-tricks in this month and once netted four times when he took on Racing Santander on October 23, 2010.

It was that 2010/11 season when he enjoyed the best of all his Octobers, reaching Halloween with a scary tally of 10 goals scored in four matches.

The No.7 then posted a similar record in 2014/15 when he bagged half a dozen goals in three games.

In terms of his favourite victims, Ronaldo has historically scored against Malaga six times in this month, while he's put four past Levante and Racing and three past Barcelona, Sevilla, Alaves and Athletic Club.

In 2017/18, it'll be Getafe, Tottenham, Eibar and Girona standing in his way, while Fuenlabrada also appear on the capital city side's fixture list, even if the superstar forward may not be likely to play in that Copa del Rey tie.

The Spain defender is out of any danger after being diagnosed with pericarditis but the Bernabéu will be cautious about his potential return to action.

The viral condition causing the pericarditis that 25-year-old Dani Carvajal has been suffering from has already disappeared, according to AS sources close to the player. The treatment he has undergone, consisting of non-steroidal anti-inflammatories and aspirin has proved successful. However, despite seeing the viral illness subsiding it has not resulted in Carvajal being discharged. Madrid’s club doctors want to err on the side of caution and have not yet specified a potential return date for the defender. AS resident medic Dr José González estimates the player will need at least a week before returning to training, and possibly two.

Carvajal has not trained since 30 September, when the club officially announced that he was going to be sidelined for an indefinite period of time due to a pericardium infection. Pericarditis is an inflammation of the membrane lining of the heart, a condition that is more often seen in young people, and which originates from a viral infection. The problem is that even once the virus has died down, exercising ahead of full recovery is not recommended as it can cause arrhythmias, a relapse (constrictive pericarditis), or can have even worse consequences, including pericardial effusion or the appearance of fluid around the heart.

Worries of a Karanka repeat

The fact that the virus has gone has made the Madrid doctors optimistic about his case. Over these past days there was a fear that it may have been a repeat of what was seen with Aitor Karanka, who, when just 24 years old and playing with Madrid, suffered from pericarditis, and was out of the game for four months during the 1998-99 campaign. Karanka was treated by the renowned cardiologist, Jorge Ros Jellici, but the virus then was slow to abate. That has not been the case with Carvajal, who should be training again before the end of October.

Klopp proving a tough nut for Mourinho to crack

Jurgen Klopp can boast what few top managers can when his Liverpool side take on Manchester United on Saturday - a winning record over Jose Mourinho.

Apart from Pep Guardiola, who has won eight and lost four of his meetings with Mourinho during spells with Barcelona, Bayern Munich and now Manchester City, Mourinho has more often than not proved a thorn in the side of most of his rivals.

Arsenal manager Arsene Wenger took 13 years to finally enjoy a Premier League win over the Portuguese, at the 13th attempt.

The uber-confident Klopp, however, will suffer no such inferiority complex.

He has locked horns with the Portuguese seven times since he was in charge of Borussia Dortmund and Mourinho was at Real Madrid. Only once has he suffered a defeat and even on that occasion Dortmund still knocked Real out in the Champions League semi-finals 4-3 on aggregate.

Klopp has three wins to his name with three other games against Mourinho ending in draws - including both Premier League meetings last season during Mourinho's first season at the Old Trafford helm having replaced Louis van Gaal.

The charismatic German has clearly enjoyed pitting his wits against Mourinho on the pitch and while there is a healthy respect between them, there is also an edge that Saturday's north west showdown is likely to sharpen.

During the draw at Old Trafford in January the managers confronted each other in the technical area with Mourinho suggesting afterwards that Klopp concentrate on coaching his team rather than waving his arms about.

The presence of Klopp and Mourinho in rival dugouts on Saturday adds another level of intrigue to a fixture between two clubs with 38 league English titles between.

Since Mourinho was appointed as United's manager he has earned 88 points, exactly the same as Klopp in the same period.

Yet Mourinho has two major trophies in the bag - the League Cup and Europa League - while Klopp awaits his first.

Mourinho said he is relishing another meeting with a club against who he claimed his first trophy in English football when Chelsea beat Liverpool in the 2005 League Cup final but against whom he suffered two Champions League semi-final defeats.

"(Now) if they respect me as much as I respect them, we are going to have another one of those matches."

ARSENE WENGER has performed a shock about-turn after revealing Alexis Sanchez and Mesut Ozil could now be sold in January.

The Arsenal manager has always insisted he would keep his star duo until the end of their contracts, even if it meant losing them for nothing.

But now he has dramatically changed his stance on the pair after being in contract talks with them for over a year.

When asked if he had placed a deadline for them to sign new deals, Wenger said: “No, not at the moment. Once you are in our kind of situation we have envisaged every kind of solution.”

And asked if that could mean they could leave in January and said: “Yes, it’s possible.”

Wenger’s change of tune could well be linked with the dip in form suffered by both players, with Sanchez especially suffering failure when his country Chile were eliminated in World Cup qualifying this week.

Simeone has the gift of five strikers

Since Diego Costa's departure, it hasn't been easy to be Atletico Madrid's No. 9. Antoine Griezmann has performed exceptionally well yet there remains criticism of his recent form, and ahead of Saturday's clash with LaLiga leaders Barcelona, Diego Simeone has five strikers to choose from.

Los Rojiblancos head into the clash at Estadio Wanda Metropolitano in a worrying run of attacking form, an inability to score against Leganes just prior to the international break leaves Simeone's charges five points behind Los Cules.

Barcelona can have trouble defensively, yet it remains to be seen whether Atleti have enough to truly put them under pressure.

Ahead of kick-off, the former River Plate coach has to choose from a pool of five players capable of starting as the lone striker: Griezmann, Luciano Vietto, Fernando Torres, Angel Correa or Kevin Gameiro.

As the club's reigning top scorer and one of the three finalists for the 2016 Ballon d'Or, former Real Sociedad forward Griezmann is likely to be the ideal candidate to beat Marc-Andre ter Stegen. He scored against the Blaugrana in a 2-1 defeat in the Copa del Rey semi-final last season.

Gameiro has his own history with Barcelona, he actually missed a penalty in that very same tie, one which had it been converted would have meant extra-time.

The previous season saw the two teams also meet in the Champions League quarter final stage and, in the second leg, the Griezmann scored twice to guide the team to the next round.

Few players enjoy such profitable spells against a team of Barcelona's stature and quality, Griezmann has been one such individual with his time with La Real also seeing him score three times.

In 22 matches against the Blaugrana, Griezmann has scored six goals with Gameiro netting against them twice, although both strikes came during his time with Sevilla.

Correa scored against ter Stegen in LaLiga last term and could well be utilised again as a surprise selection on Saturday.

Whilst Griezmann's record is impressive in the modern era, no striker has ever struck as much fear into the heart of a Los Cules team as the veteran Torres.

Barcelona remain his favourite opponent. He has scored against them 11 times over the course of his illustrious career with the first of these goals actually coming back in the 2002/03 season.

The Spaniard has caused Barcelona so much trouble that they couldn't even escape him when he left for England, in the 2012 Champions League semi-final, it was Torres who scored the decisive goal which sealed Los Cules' elimination.

Meanwhile, Vietto cannot profess to having such good memories of facing the Catalan giants, in his eight matches against them he has lost on every single occasion although he did score a solitary goal in a 3-2 defeat with Villarreal.