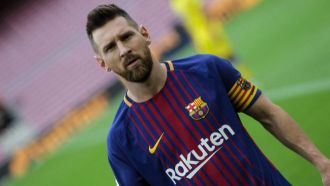 It has been a successful start to the 2017/18 season for Lionel Messi, given that Argentina have qualified for the World Cup and given that Barcelona are LaLiga leaders, however it has also been a busy start to the campaign for the No.10.

That's because he has played every minute of the season so far, all 1,350 of them.

Between the two legs of the Supercopa de Espana, the seven league matches, the two Champions League nights and the four South American qualifiers, Messi has been worked hard.

No player in Europe has played as much as the Argentine, with Dani Carvajal having been the closest with 990 minutes to his name before a heart condition saw him placed on Real Madrid's medical report.

For Messi, 990 of his minutes have come for his club side and he is set to add to that this weekend, given that the Blaugrana visit Atletico Madrid, which is not the kind of match where Ernesto Valverde is going to consider rotation.

Of course, Messi is the first to say that he doesn't want to rest, and he knows how to save his energy for the moments when it matters most.

However, he will have to take a breather at some point, perhaps in the LaLiga match at home to Malaga on October 21.

In the midweek following that clash with the Andalusians, Barcelona are in Copa del Rey action away at Murcia, one fixture which he will surely - and finally - be rested for.

Barcelona CEO: We are ready to sign Coutinho in January

On Wednesday afternoon, Barcelona's CEO, Oscar Grau, defended the Blaugrana's financial situation and claimed that they are ready to sign Philippe Coutinho in January.

In what will undoubtedly be an unwelcome statement on Merseyside, Los Cules' chief executive made clear that the club would be willing to make a move to sign the Brazilian in the winter, even if Liverpool's stance has not changed.

"We are ready to sign Coutinho, or any other player, in January," he explained at a press conference in which the economic figures from the 2016/17 season were made public.

"Even if clubs don't wish to sell, we would definitely be willing to try if the board decide that a player is needed."

Barcelona also announced a record income of 708 million euros for the campaign just gone, which has allowed for a projected budget of 897m euros for the 2017 campaign, the largest budget in the LaLiga club's history.

There is no intention on the part of Real Madrid to dip into the transfer market despite Dani Carvajal's expected long-term absence.

The club considers that the position is more than covered with two high-quality exponents on the right side in Achraf Hakimi and Nacho Fernandez.

Achraf, a footballer in whom Real have great hopes, and the versatile Nacho, a player who can act in all the positions of the defence, are both senior internationals with their respective national teams, Morocco and Spain.

In the last few days there was speculation that Los Blancos might look for a new recruit, but as MARCA have been able to find out, this possibility has been completely discounted.

Of course, for now, it is risky to talk about deadlines. The evolution of his ailment, a viral infection that affects the pericardium, invites Real to maintain the maximum precaution.

In any case, it is hoped that the strength of the player will help him to overcome what has been a hard blow, given the unusual nature of his absence.

Real Madrid and nothing more for Bale

It is said in Wales that seldom have they seen Gareth Bale so downhearted, but that's understandable after not qualifying for the World Cup meant that the Real Madrid attacker has nothing but his club football to look forward to.

No Ballon d'Or nomination, no World Cup, and at this precise moment, no matches either.

He went through to the dressing room to give encouragement to his teammates, but almost could not articulate the words.

The feeling of failure has weighed heavily on his conscience and his new injury left him out of one of the most important matches in Welsh history.

"The team accused Bale of being too depressed" said the Wales Online daily, which reflected on his contribution during the qualifying phase.

Not in the list of 30 names for the Ballon d'Or is a blow, and recovering from the injury in the soleus... there is very little good news for Bale at present.

Currently valued at 80 million euros, that's a figure lower than that paid by Real Madrid in the summer of 2013 for his services.

Despite going through the worst moment of his career, and looking for the positive side, those in his immediate environment believe that Wales' elimination can trigger a reaction in Bale for the remainder of the season.

"There is nothing left but Madrid and that should ensure he has a spectacular campaign," close friends have suggested.

In that sense, they think that if he looks after himself, and without the distraction of the World Cup, the Welshman can return to somewhere approaching his best version at Real Madrid.

To do this, Zinedine Zidane will play a decisive role, and the French coach will make every effort to recover Bale's best physical and, above all, mental state.

With the season just started, getting the best Bale back is a priority.

The Costa Rica keeper looks set for a race against time to face Tottenham next week after suffering a muscle strain in World Cup qualifying.

Keylor Navas could be sidelined for Real Madrid's next two matches after suffering a thigh muscle injury on international duty with Costa Rica.

In a statement, national team doctor Alejandro Ramírez confirmed that Navas - who has now been released from the Costa Rica squad - has strained "the vastus medialis and part of the adductor in his right thigh".

Keylor may struggle to make next week's Spurs clash

The 30-year-old is set to miss Real's LaLiga clash away to Getafe on Saturday, and could also have to sit out next Tuesday's Champions League group-stage match at home to Tottenham Hotspur.