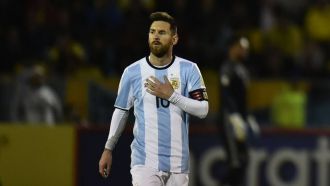 Messi throws Argentina on his back, drags them to World Cup

A Lionel Messi hat-trick was enough to see Argentina beat Ecuador and book their place in the World Cup 2018 next summer in Russia.

His country needed him. The fans needed him and most importantly, perhaps, his teammates needed him. And Lionel Messi obliged as he so often does. He landed a hat-trick as Argentina beat Ecuador 3-1 in Quito on Tuesday night to book themselves a place at the World Cup next summer.

It looked like it was going to be a long night for the visiting side as Ecuador took a very early lead. Romario Ibarra poked the ball past Sergio Romero inside one minute as the fans were still piling into the stadium.

A nightmare campaign looked like it would end fittingly. That was before Messi sprung to life though. He had the albiceleste level after 11 minutes when a neat one two with Di Maria was sent past Banguera and he made it 2-1 just seven minutes later when a slightly heavy pass form Di Maria was chased down by the Barca star and he won it back before slamming a shot to the back of the net.

He wheeled away with delight and everything seemed okay for once with Argentina.

Ecuador, with nothing to lose, drove forward at every chance, and while Argentina never looked truly comfortable at the back, they managed to keep the home side at bay.

Messi sealed the deal and his hat-trick on 62 minutes when he looped a shot past the helpless Banguera. At 30, and with his last World Cup at his very best next summer, he had single-handedly willed his side into the tournament.

There was no way back for Ecuador, who were playing for little more than pride. They huffed and puffed but it was over and they knew it.

Argentina knew it too. Their nightmare qualifying stage was over and they could finally put it behind them with a place in Russia secured and more time and less scrutiny to get things right under Sampaoli before next summer.

European champions Portugal qualified for next year's World Cup with a convincing 2-0 home win over Switzerland on Tuesday, ending their rivals' perfect record in Group B after an own goal by Johan Djourou set them on their way.

With midfielder Bernardo Silva giving one of his best performances for Portugal, the hosts did not even need a goal from captain Cristiano Ronaldo as they pulled level on 27 points with Switzerland and won the group on goal difference.

The unlucky Djourou put the ball through his own net four minutes before halftime and Andre Silva sealed the victory in the 57th minute with his ninth goal of the campaign.

The Swiss had led the group since beating Portugal 2-0 in Basel in their opening match in September last year and gone on to win all nine matches before Tuesday's encounter in Lisbon, while Portugal had won their subsequent eight.

Aside from a penalty shootout defeat by Chile at the Confederations Cup in June, the defeat by Switzerland was the only competitive game Portugal have lost since Fernando Santos took over as coach in September 2014.

Switzerland will now enter a playoff over two legs with another European group runner-up in November for a place in Russia. The draw for the playoffs will be held next Tuesday.

Ronaldo should have scored his 16th goal of the qualifying campaign when he was sent clear in the 78th minute but he over-elaborated as he tried to get around Yann Sommer and allowed the goalkeeper to claim the ball but the points were already safe.

"I always believed we could do it," said Santos. "I believed in the players and fortunately they gave me this present."

"When you have quality and organisation, you are always closer to winning. The whole 90 minutes weren't perfect, but fortunately we won and we are going to Russia."

The Swiss were cool and comfortable for the first half hour, stringing together some neat moves in midfield, while Portugal were let down by poor crossing and struggled to get the ball to Ronaldo.

But after Silva had a rasping drive tipped away by Sommer, the hosts moved up a gear and went ahead with the help of some defensive misfortune for the visitors.

Eliseu fired in a low cross which Sommer parried, only for the ball to ricochet off Djourou into the net.

The hosts took control after the break and scored again with a superbly-worked goal. A quick exchange of passes freed Silva on the right and his low cross was turned in by Andre Silva at the second attempt to send the Estadio da Luz into raptures.

Swiss midfielder Granit Xhaka admitted that his side had not performed well enough. "Today, we were somewhere between bad and very bad," he said.

France's Antoine Griezmann scored one and set up another as they booked their place at next year's World Cup finals by beating Belarus 2-1 at the Stade de France in their last Group A qualifying game on Tuesday.

Griezmann opened the scoring and then set up Olivier Giroud before the break while Belarus reduced the arrears on the stroke of halftime through Anton Saroka.

The result put France, who will take part in their sixth consecutive World Cup finals, on 23 points after 10 games, four ahead of second-placed Sweden.

Four days after a decisive 1-0 win in Bulgaria, Didier Deschamps's team were never really under pressure and avoided having to go through the playoffs, as they had to reach the 2010 and 2014 finals.

"We did the job, our goal was to qualify first in our group," France coach Didier Deschamps told a news conference.

"They had speed and they were very careful at the back," he added.

Deschamps switched from a 4-3-3 to a 4-4-2 formation with Giroud and Griezmann up front, pushing Kylian Mbappe and Alexandre Lacazette onto the bench.

France were the early aggressors but Belarus had the first clear chance when Yuri Kovalev's low angled shot whizzed just past Hugo Lloris's right-hand post in the 12th minute.

The hosts went close in the 18th when Rafael Varane's point-blank header was tipped over the bar by Sergei Chernik.

Kingsley Coman was a constant menace on the right flank and his fine cross in the 21st minute was met by Giroud, whose header crashed onto the bar.

The hosts were rewarded for their efforts six minutes later, however, when Griezmann beat Chernik from close range after a Blaise Matuidi through ball tore the Belarus defence wide open.

They doubled their tally six minutes later as another through ball, this time from Griezmann, was collected by Giroud in the area and the Arsenal forward clinically slid it past Chernik.

It was Giroud's 28th goal for France.

France's concentration levels dipped, however, and they were punished on the stroke of halftime when Saroka's cool finish allowed the visitors to grab a route back into the game.

Yet France maintained control in the second half as Mbappe came on as a substitute for Coman, but made little impact.

From then on, the hosts were just content to keep their foot on the ball and look to hit their opponents on the break.