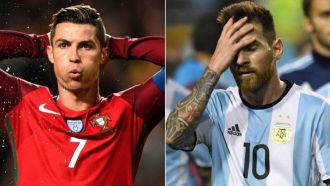 Cristiano Ronaldo and Messi put the World Cup on alert

World Cups are for the best players around but there is a serious risk in either Cristiano Ronaldo or Lionel Messi missing the showpiece next summer, with the unimaginable scenario of both failing to qualify still alive.

The repercussions for sponsors, fans, and of course the great footballing nations of Portugal and Argentina would be severe, with the door possibly opening for the likes of Neymar to stake their claim as the world's greatest.

Real Madrid winger Ronaldo goes into Tuesday's game at home to Switzerland knowing that a win will secure Portugal's passage to Russia, although anything else still opens the way via a tricky play-off with a fellow group runner-up.

That route would be a joyous one for Messi's Argentina, who are left relying on other teams unless they can beat Ecuador away from home on the same evening (albeit in the early hours of Wednesday morning for European viewers).

While the play-offs represent a reasonable alternative for the Selecao, should they fail against Switzerland, they will know that a yellow card for Ronaldo on Tuesday means the forward missing the first leg through suspension.

The Swiss will be desperately fighting for their own place in the World Cup when taking to Lisbon, a factor which Argentina at least avoid when facing Ecuador, who have nothing to play for.

A victory for the sixth-placed Albiceleste ensures that they would at least enter the intercontinental play-off versus New Zealand, as fifth-placed Peru play Colombia, who are fourth.

If that match ends in a draw or a Colombia win, and Chile fail to beat runaway leaders Brazil in Sao Paulo, an Argentine victory secures a passage straight to Russia should they overtake Peru on goal difference.

An Argentine draw requires Paraguay to slip up at home to lowly Venezuela and a Peruvian defeat to reach the play-off, while an additional Chile defeat of more than one goal would guarantee a top-four finish.

Furthermore, Messi's men can even lose in Quito and yet qualify in the event that Paraguay lose along with a Peru defeat to Colombia by more goals than whatever Argentina lose by, altering their goal difference balance.

There is no room left for error for the Barcelona star or his Clasico colleague, with the game of football respecting only the team whose player hits the back of the net in these crucial matches, no matter their prestige or past achievements.

Gordon Strachan refused to discuss his future and offered effusive praise of his players after Scotland’s World Cup hopes were dashed by their failure to beat Slovenia in Ljubljana. The Scots, needing victory to secure a play-off spot, led 1-0 at half-time before conceding two goals to Slovenia with Robert Snodgrass’s late equaliser ultimately immaterial.

Strachan’s contract with the Scottish FA expires at the conclusion of the qualifying campaign, leading to the widespread assumption that the 60-year-old would leave his position as international manager of his own volition. That sense has been clouded somewhat by Scotland forcing themselves into play-off contention after a dismal start in Group F, with some members of Strachan’s squad stating publicly they want him to stay.

“You have to ask that question but you know fine well that I’m going to say I’m the last person I’m thinking about now,” said Strachan. “Players, staff and family – I want to make sure they’re all right. The players’ families have backed them up and everything else. So we are looking after them at the moment. Me? It’s not a problem. I am proud, really proud, to be their manager.

“I’ve been fortunate to have been successful in my own career and get to places. But with all due respect to the lads I played with – some who are my mates now – this group are as good as anything I’ve worked with.

“This group do it for nothing. They do it for their country, their families and the fans. So it’s an honour to work with them and they’re hurting badly. When I look back I think, ‘You have given it a right good shot,’ and they left nothing in the dressing room. Over the last two games especially they gave it everything they had.”

Strachan pointed to the lack of height in the Scottish population as a problem, a matter which will raise eyebrows given the basic level of goals conceded to Slovenia. Organisation, rather than physicality, appeared the key issue.

“Technically we’re fine,” Strachan added. “But our guys have to work harder to get on the ball than bigger lads at six foot three.

“We have to fight harder for every ball and jump higher because it is easier for these type of guys. Physically we have a problem against the teams we have faced in the last couple of years.”

Mohamed Salah scored with a last-gasp penalty to book Egypt a place in the World Cup finals for the first time in 28 years as they edged Congo 2-1 in their dramatic Group E qualifier on Sunday.

Salah had given his side a 63rd minute lead even though Egypt still looked tentative in a tense match with opponents who had yet to win a match at the bottom of the group.

A defensive blunder had let in Salah, to the relief of the home crowd, but Egypt's dreams threatened to turn into a nightmare when Arnold Bouka Moutou equalised, firing past 44-year-old goalkeeper Essam Al Hadary with three minutes left.

The home side, though, won a 95th minute penalty which Salah converted to secure the trip to Russia -- Egypt's first appearance at the finals since 1990 in Italy

Jubilation in Egypt after first World Cup berth in 28 years

Egypt's capital crackled with fireworks and blared with horns as the soccer-crazy country reached the World Cup for the first time in 28 years as rare scenes of joy took hold of city blocks celebrating a 2-1 victory over Congo.

The win clinched Egypt a long-awaited spot in Russia for the 2018 World Cup finals, where the Arab world's most populous country will compete on football's ultimate stage for the first time since Italy in 1990.

"It's been 28 years and we're finally going to enter the World Cup. Today is a day of celebration for the entire country," said 41-year-old Gaber Fathy.

The raucous mood spilling out on the streets marked a respite for Egyptians after years of hardship, from IMF-backed austerity reforms that have pushed inflation to record highs to a tough law on protests that has made public gatherings exceedingly rare after two presidents were toppled since a 2011 uprising.

"You can look around and see how people are happy. This is something you never witness in Egypt," said 23-year-old Gamal Mohamed in downtown Cairo's Tahrir Square, the iconic centre of the country's once-active protest movement, which has since been quashed by tough security measures.

Egypt's President Abdel Fattah al-Sisi congratulated the Egyptian people after the match as tireless fans draped in flags turned the streets into an impromptu parade of red, white and black.

Just across the border in neighbouring Gaza, where Egypt has led a political reconciliation process, thousands of Palestinians poured into an open-air park to cheer on the second Arab country to qualify for the 2018 World Cup after Saudi Arabia.

Andrea Pirlo to retire from football in December

One of football's most technically gifted midfielders, Andrea Pirlo, will call time on his career in December with the Italian set to retire when his New York City FC contract expires.

After vastly successful spells with Internazionale, AC Milan and later Juventus, the incredibly popular figure moved to the MLS in search of a new experience in football.

In an interview with La Gazzetta dello Sport published on Sunday, the 38-year-old communicated his decision to retire at the expiry of his current contract.

"You realise that the time has come," he explained.

"Every single day you have physical problems, you can't train as you wish because there is always an issue.

"At my age, that's enough, you can't go on forever, I will do something else."

It seems bizarre, yet it wasn't until the latter years of Pirlo's career that he was truly appreciated across the continent, in a somewhat similar manner to Paul Scholes.

Having lifted the World Cup in 2006, the Brescia academy graduate enjoyed magnificent success throughout his time playing football, he will now look to give something back in another capacity.

"I will return to Italy in December, I'm going to give myself some time to decide what to do next," he intimated.

"At 38 it is right to give young players the space to develop, I'm not angry, instead I will look to help my teammates and the coach."