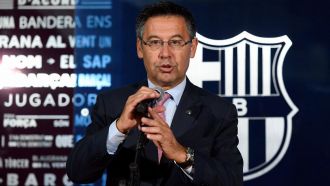 Bartomeu: Messi is already playing under the new contract

Tuesday's victory over Juventus has seen Barcelona enter calmer waters following a summer of discontent, and there is also good news regarding Lionel Messi as president Josep Maria Bartomeu has confirmed the Argentine is already playing under the terms of his new contract.

There had been an element of concern in recent weeks over the future of the forward given the fact his signature was not yet present on the previously announced extension.

Los Cules hit back and suggested that the signature of Messi's father made the contract binding, something which Bartomeu once again pointed towards on Thursday in an interview with 'Fora de Joc' on 8TV.

"We will take the photo with Messi's signature, hopefully before the end of the year, but the contract has been signed by his father, who has the power of his image rights. This contract is signed until 2022 and he is already playing under it," he explained.

Controversy surrounding Andres Iniesta's own contract renewal has been significant too, Bartomeu's insistence that an agreement had been reached were quite bluntly rebuffed by the player.

When quizzed on the topic of the Blaugrana's veteran midfielder, the 54-year-old made clear that plans were in place to keep Iniesta at the Camp Nou, which includes some special aspects within the agreement, just for the Spanish international.

"The agreement with Iniesta will be special, it will be different just because it is him, I won't reveal exactly what because it is part of private negotiations, but with Ramon Sostres, we have been talking for a long time."

Nobody can argue against the importance of the 33-year-old to Barcelona supporters, he is a symbol of the club and this hasn't been lost on the president.

"Iniesta isn't just a reference point for us, but also for the young supporters, he has earned the right to play here until he decides not to any more, Andres is critical to this club and the intention is that this extension will be an indefinite contract so that he can finish whenever he desires."

Philippe Coutinho's appearance for Liverpool against Sevilla on Wednesday ensured the Brazilian will be cup-tied in the Champions League for the remainder of the 2017/18 season.

A transfer to the Camp Nou is now even more unlikely with Bartomeu suggesting that it was the market inflation which prevented the club from closing a deal in the summer.

"If the market does not allow a move, then you can't force one, the market is changing sizably because there is money coming into it that isn't from the world of football," he intimated.

The club's transfer business as a whole was a source of frustration for supporters, with only Paulinho, Ousmane Dembele and Nelson Semedo arriving as first-team players, yet the club chief has no regrets over the Blaugrana's summer dealings.

"I have no frustration with how the transfer period went, I'm very happy with our signings, we wanted a good right-back and Semedo arrived, Paulino arrived in midfield and Dembele as a Neymar replacement, I'm also delighted about Deulofeu's return," he concluded.

Isco assured of a place in Zidane's system

Thursday afternoon saw the news Real Madrid supporters have been waiting for finally confirmed, Isco has officially renewed his contract, assured of a place in Zinedine Zidane's system.

The former Malaga playmaker is now tied to the Estadio Santiago Bernabeu until June 2022 with his buyout clause set at around 700 million euros.

A deal had been agreed in principle for a while, yet as is the modern trend in LaLiga, the contract was not officially inked until Thursday morning with a number of finer details needing to be agreed upon.

Any speculation of a transfer away from the Spanish capital can now be stopped, there will be no Barcelona move and Manchester City will not be taking the Spanish midfielder whom they have scouted for over three years.

Isco will remain with Real Madrid and following a six month spell where he has discovered the finest form of his career, he now has a concrete place in the first-team.

Such a position has not always been clear, hence the uncertainty surrounding his future, and even James Rodriguez had been above the Spaniard in the pecking order upon the French coach's arrival.

Players who are naturally suited to the No.10 position, just behind the striker, are becoming ever more versatile through necessity.

There is no longer the widespread clamour for such a player and it has seen several of the finest exponents of the role adapt their own game to suit a role in a deeper midfield position.

Isco is one such example and within the 4-4-2 system Zidane is currently utilising, there is a clear spot for him.

He is stationed on the left but given the marauding nature of Marcelo, combined with the Brazilian's outstanding workrate, Isco is given total freedom to drift and dictate play from the middle of the pitch.

Since the beginning of the current campaign, the 25-year-old has played in and adapted to this role rather quickly, his display against Manchester United drew comparisons to the great Andres Iniesta such was his sheer control over proceedings in Skopje.

Apoel Nicosia saw first-hand the freedom handed to the Spanish international on Wednesday evening as Isco popped up in what was almost a false-nine position in-between Cristiano Ronaldo and Gareth Bale.

His gives opposing teams so much to think about and there is no lack of balance even if recent domestic results haven't been positive.

That hasn't been any fault of Isco's, the chances have been created against both Valencia and Levante, they simply weren't converted.

It has taken time for Zidane to be convinced he could use the midfielder in a successful team, even if that now seems ridiculous.

Los Blancos are much better for the midfielder having found this new role and once everybody is available, we will once again see Zidane's team excel.

There is a calmness, as well as complete confidence and trust in Gareth Bale. When it comes to the Welshman, there are no doubts. Directors, coaches and teammates all know that the former Tottenham player will soon return to the form that he showed during the first months of last season and that made him a reference point for this team. He can count on the support of all sectors of the club. While it's true that there were some jeers for him at the Estadio Santiago Bernabeu on Wednesday, the applause covered the critics.

Bale has not had a simple start to this season. The injury he suffered, which was more serious than it seemed, isn't simple to recover from, not physically or mentally. Confidence comes with matches and that is what the Welshman has been lacking.

The forward knows that he is currently the focus of criticism, but his cool character will help him to carry this burden. He trusts in his chances and in the gestures of support from his teammates, who applauded him when he was substituted on Wednesday and who showed Bale and the fanbase that they have confidence in him.

It hasn't been necessary for directors or coaches to sit down with Bale to convey their support. He already has it. His way of being makes it easier to overcome these delicate moments. Now the question is one of feeling, of working out if his body is at its peak again, something he is working towards.

During the discussions that were had with Bale during pre-season, he always tried to keep things calm and to convey his usual relaxed character. Nothing has forced him to change, not even the rumours of a possible exit and the interest of Jose Mourinho.

In his relationship with his teammates there has always been one obstacle, that of the language barrier. As such, he has sometimes sought refuge by speaking to Luka Modric and Cristiano Ronaldo, who speak perfect English. However, what has been clear is that Bale and his teammates do understand each other on the pitch, no matter what language they speak. That is because of football, a universal language.

Atletico Madrid train for the first time at Wanda Metropolitano

Ahead of Saturday's clash with Malaga, Atletico Madrid's first-team have trained at the brand new Estadio Wanda Metropolitano for the very first time.

The visit of the Andalusian side has been a date circled in the diary of every Los Rojiblancos supporter since the fixture list was announced, with it set to be the match that officially opens the club's new stadium.

Moving from the historic Estadio Vicente Calderon was always likely to be an emotional endeavour for these supporters, yet excitement has slowly built as the Wanda Metropolitano got closer to completion.

Thursday saw the club's players given the opportunity to use the brand new facilities, including the dressing room, and train on the pitch for the first time in a move that is hoped will allow them to get accustomed to their new surroundings.

The pitch was laid only a few days ago with the project to get the stadium ready having been less on schedule than many would have liked.

These delays have forced Los Colchoneros to play their first three LaLiga matches away from home in what was far from an ideal start to the season.

Koke was one of a number of players who wished to take in their new surroundings even before training, the Spanish midfielder standing in the stadium almost two hours before the scheduled start of Thursday's training session.

The session itself was a light one with the players enjoying a joke after Filipe Luis fired a ball into the net - the very first goal at the stadium.

Champions League football has ensured Diego Simeone hasn't been able to prepare for the visit of Malaga in the way he would have liked and he gave his players the day off on Wednesday following their clash with Roma.