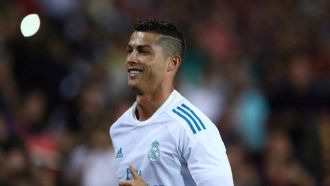 Ronaldo has missed Real's last four games due to a suspension for pushing a referee in the Spanish Super Cup against Barcelona.

He still has one domestic game to serve of the ban, but he is free to face Cypriot side APOEL as Real begin their defence of the Champions League.

The long ban has prevented Ronaldo from making a single competitive start this season and his comeback arrives at a time when Real need him most.

Zinedine Zidane's side have suffered disappointing draws against Valencia and Levante that have left them four points off the pace behind Liga leaders Barcelona and Real Sociedad in the table.

"It's clear that he's very important to this team and has the ability to score incredible goals and that would have served us well today," said Real midfielder Llorente after Saturday's surprise 1-1 draw against promoted Levante.

Real have lacked firepower in Ronaldo's absence after selling striker Alvaro Morata to Chelsea. They will be without forward Karim Benzema for around a month after the Frenchman injured his hamstring against Levante.

Gareth Bale was particularly wasteful on Saturday after coming on for Benzema against Levante, spurning three clear chances to score.

Ronaldo hit top form at the business end of last season to fire Real to a Liga and Champions League double and was allowed to report back later than his team mates for pre-season training.

Real barely missed him as they outclassed Manchester United to win the European Super Cup, although he came on as a late substitute in the 2-1 win.

They also comfortably saw off Barcelona in the Spanish Super Cup, winning 5-1 on aggregate despite only having Ronaldo at their service for 24 out of 180 minutes.

The four-time world player of the year's value to the team, however, has been highlighted by their struggles to put their chances away in the league.

"Another player who can play up front is Cristiano, we've been without him for four games and it's far too long," added Vazquez, who scored Real's only goal against Levante.

Morata and Mariano amplify the No.9 debate

Cristiano Ronaldo's punishment, Karim Benzema's injury and Gareth Bale's lack of form have failed to stop the ongoing debate on whether Real Madrid need a true No.9, particularly because of the way in which Alvaro Morata and Mariano have started at Chelsea and Lyon respectively.

The two consecutive draws in the Estadio Santiago Bernabeu against Valencia and Levante have brought the matter into sharper focus.

Borja Mayoral, another attacking option, needs more time to adapt and, for the moment, won't be considered by Zinedine Zidane.

Morata has scored three goals in four matches and only Romelu Lukaku is ahead of him in the Premier League standings, and with almost 80 minutes more on the pitch than the Spaniard.

He has quickly found a place in the hearts of the Stamford Bridge faithful, while those in the stands at the Bernabeu miss his contributions from last season; 19 goals.

Mariano hardly had any opportunities in Madrid (participated in 14 games scoring five goals), but he's hit the ground running in Ligue 1.

Only Falcao and Cavani (7) have scored more goals than him in the French championship this season.

His 4 goals in 5 games have even put him in the international spotlight.

Valverde tightens up Barcelona and Messi does the rest

At the start of a season which has been somewhat complicated by everything else around Barcelona, Ernesto Valverde has preferred to focus on sporting matters.

Only by continuing to perform well on the field can they alleviate some of the tension and dark cloud which has hung over the boardroom.

With three matches played in LaLiga, Marc-Andre ter Stegen has still not had to pick the ball out of the back of his net yet.

Valverde has tightened up his team and has achieved something which the Catalan club have not managed since the 2014/15 campaign when they beat Elche, Villarreal and Athletic in the first three games of the season.

Last season, they started by conceding two goals against Real Betis in their season opener, although managed a 6-2 win, while Atletico scored a goal during Barcelona's victory at the Vicente Calderon on match day three.

With Lionel Messi in imperious form once again, Valverde is aware that improving his defensive numbers will give Barcelona an excellent chance.

So far, he has used Javier Mascherano and Samuel Umtiti against Betis before opting for the Frenchman and Gerard Pique at Alves, a partnership that was repeated against Espanyol.

Next to Athletic, Valverde's former team who have yet to play on match day three, Barcelona are the only team who have not conceded a goal so far.

One of the keys to this goes beyond the centre-backs though as Sergio Busquets and Ivan Rakitic perform their defensive duties exceptionally.

On the other hand, Messi is focused only on goals and seems to be more determined than ever to keep Barcelona challenging at the top.

Of the 10 goals that Barcelona have scored in official games this season, Messi has scored six of them.

Things may have changed around him with Neymar leaving and Ousmane Dembele arriving but nothing has changed for 'La Pulga'.

Footballers can come and go at Barcelona but Messi remains the main man and as good as ever, overcoming all rivals before him with ease.

After a difficult start to the campaign, there is now much more grounds for hope at Barcelona.

Manchester United failed to progress under the leadership of David Moyes and Louis van Gaal following the departure of Alex Ferguson in 2013, according to the club's current manager Jose Mourinho.

United, who enjoyed a triumphant era under Ferguson, struggled in the transition after the Scottish manager left Old Trafford following the annexation of their 20th and most recent Premier League title.

"There was an evolution in the other clubs; there was no evolution in this club. In all the areas that make a team successful I think we stopped in time," Mourinho told the Sunday Times in an interview.

"That was quite an empty period in this club with no evolution in areas that are important," added the man who has taken United back to the top of the Premier League early in the new season.

David Moyes replaced Ferguson but was sacked after 10 months following poor league results and the team's exit from domestic cup competitions and the quarter-finals of the Champions League.

Dutchman Van Gaal took over but was replaced with Mourinho after two seasons as United failed to challenge for the Premier League title and did not qualify for the 2016-17 Champions League.

"Of course, in the first season I was trying to improve (this)... That's why I fought hard for trophies," said Mourinho who won England's League Cup and Europe's second-tier trophy, the Europa League, in his first season.

"And that's why I prefer a Europa League victory than a third or fourth spot in the championship. Because the best way to accelerate the process is to do the process winning ... Because winning gets you smiles."

Bibiana Steinhaus enjoyed a debut free of major incidents as she became the first woman to referee a Bundesliga match in the 1-1 draw between Hertha Berlin and Werder Bremen on Sunday.

A second-half strike from Thomas Delaney gave Bremen their first goal and point of the season in a match which produced one yellow card and no sendings-off or controversial penalty incidents.

Steinhaus, a 38-year-old police officer, has been a German FA referee since 1999 and taken charge of 80 second division matches since 2007.

"To be honest, I am relieved that it is all over and I will be delighted when normality returns from Monday," she said. "I was really able to enjoy it here with my team."

"To make all the right decisions so confidently, it was certainly a first-class performance," he added.

Hertha defender Sebastian Langkamp said: "She did well, although that is no surprise."

Werder coach Alexander Nouri added: "I've said before that it doesn't matter whether a man or a woman is refereeing. It's the performance that counts and that was okay."

In 2015, Kerem Demirbay, playing for Fortuna Duesseldorf at the time, was banned for five weeks for making a sexist remark after he was sent off in a second division game by Steinhaus, who mentioned the remark in her match report.

Hertha went ahead in the 38th minute when Vladimir Darida was bundled over, but the referee played the advantage and Mathew Leckie lashed home the loose ball.

Werder, somewhat unlucky to be behind, levelled in the 59th minute when Delaney rifled home from the edge of the penalty area.

Schalke 04 made it two wins in their first three matches when they beat promoted VfB Stuttgart 3-1 in the later game.