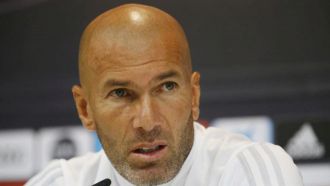 Zidane: BBC or Isco and Asensio? Things will change

Real Madrid will not commit to always starting their BBC attack given the form of players such as Isco and Marco Asensio, Zinedine Zidane has admitted.

The league champions take on Levante on Saturday in the third game of the season, looking to put their disappointing draw against Valencia behind them.

Prior to the game, Zidane was quizzed on his selection headache, with Isco and Asensio making things very difficult for the much vaunted BBC attack, although he did single out the youngster for some special praise.

"They have always been important for me, both of them have," he said to reporters.

"All of the others are too. The set-up and the players are always going to change but the main thing is that they feel important.

"With Asensio's explosion, I'm not surprised. What he brings to the team is phenomenal but we must leave him in peace and let him relax.

"He can still improve a lot but needs humility and to be calm in order to do that. He shouldn't be distracted by any noise from the outside."

Zidane also was keen to veer clear of any further refereeing controversy and touched on what potential Catalan independence could mean for LaLiga's future.

"Referees try to always do well but they will make mistakes. It is a difficult job for them but like everyone else in life, they can improve," he added.

"In relation to Barcelona, I don't know what will happen there. It is a difficult debate but I hope we don't have a league without them, I don't want that.

"As a fan of the sport, I simply can't see a Spanish league without Barcelona."

They may be his rivals but Real Madrid boss Zinedine Zidane doesn't want to contemplate LaLiga without Barcelona.

On Friday, the Frenchman was asked for his views on the subject of potential Catalan independence and the impact that it could have both on the Blaugrana and Spanish football as a whole.

He was steadfast in his view that he would not like to see the Spanish top flight without Real's great rivals in it.

"It is a difficult debate and I don't know what's going to happen but I hope that we don't have a league without them, I don't want that," he said.

"I don't want to see that, as a fan of the sport. For me, I can't see it. Barcelona would always have to be part of the league."

Ernesto Valverde: The best thing about the transfer market is that it is finished now

Barcelona coach Ernesto Valverde admitted that it was a difficult summer transfer window for the club saying that he is happy it is now all over.

The Catalan club lost a prized asset in Neymar and were frustrated in several of their negotiations including Coutinho from Liverpool although they did manage to bring in Dembele.

"The best thing about the transfer market is that it is finished now," he told a press conference.

"We now need to concentrate on competing, we have done our best and I am happy with the squad. It is the best in the world, it is a fantastic squad and we have a tendancy to down play what we have here.

He is also pleased with the adaption that Dembele is showing.

"It has worked out well being here over the past days. At the start it showed his lack of training and he was the centre of attention while since then he has gradually become more relaxed and is integrating well," said Valverde.

"He is now ready and I don't know if for tomorrow or the upcoming matches but each day he is improving. Is he ready to start? I will have to decide.

"He is a kid of 20, very young. We all are aware of the impact his signing has made, he has been fine but at the end of the day these kind of things do have an affect. Over time though he will speak more with his teammates and fit in."

The Barca players are gradually returning from international duty and Valverde admits it is not ideal preparation for the derby.

"Many of my players go into the game with legs that are more tired than that of the Espanyol side and we will ee how Paulinho and Suarez are because I have yet to see them," he said.

"I have not been able to speak to him (Suarez) but as far as I know he is fine because he has played the two international matches. Against Alaves I was close to putting him in the list but I was aware that he wasn't quite ready."

Fans have been unhappy with the Barcelona board over the transfer activity and the only way to ease that pressure is with some good results.

"There is a lot of talk at Barcelona which is normal," said Valverde.

"At times though it appears as though there is more than there is in reality. We have a good squad and we will try to be solid in attack and in defence so that the fans can enjoy themselves and we can achieve our goals."

Manchester United manager Jose Mourinho says he was against Andreas Pereira's decision to move to Valencia in the summer transfer market.

"He has the ability to fight for a place in the team and to have the chance to be a Manchester United footballer.

The player is on loan at Valencia and so United can still bring him back.

"His decision can be taken as a player that wants to play each week but also as a young player that it is not prepared to fight for something more difficult like the Manchester United midfield," said Mourinho.

"You have to be ready to fight and I am disappointed but it was his decision and I opened the door for him. He has a long-term contract and we can bring him back in January so it is not a big issue but it did disappoint me a bit."

Pep Guardiola: Arsenal wanted Sterling for Alexis Sanchez but I said no

Manchester City boss Pep Guardiola has revealed that Arsenal looked to receive Raheem Sterling in exchange for wantaway forward Alexis Sanchez this summer, but the Catalan himself turned their counter-offer down.

The Citizens were heavily linked with a move for the Copa America winner and while Arsenal were willing to part with their star striker, the terms were not seen as agreeable by their coach.

"I do not know what will happen in the winter or next season," he said of the player's probable Emirates exit.

"We had an interest but Arsenal wanted to make an exchange for Sterling, and I said that was not an option.

"I believe in Sterling very much. They only thing I was willing to pay was money, but in the end they could not sign a replacement."

The Premier League recently decided that from next summer on, the transfer window will close before the beginning of the domestic season, which was applauded by the former Barcelona and Bayern Munich boss.

"I have been here for a year and I already understand how much traditions are valued," he added.

"It is difficult to change things, but it is important to take initiative with some things.

"Congratulations to the Premier League because it is important to start the season with players who are going to stay and I hope the rest of Europe will do the same."