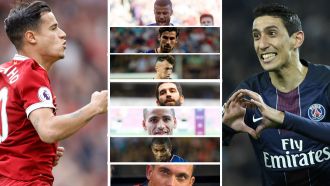 Thursday night signals the end of the transfer window for the majority of European clubs and the clock is ticking on Barcelona's business with plenty of work left to be completed.

Now that Ousmane Dembele has been captured from Borussia Dortmund, the Azulgrana are targeting two more incomings with a big hole remaining in their midfield.

That has led the Catalans to Angel Di Maria and Philippe Coutinho, the first of nine deals they are seeking to close out in the final four days of the Spanish window.

These are not the only potential arrivals at the Camp Nou but they are certainly the priorities, which is tough because Liverpool remain reluctant to sell the Brazilian, amid contradictory reports of their position.

As for Di Maria, the Argentine's fate is tied up with Paris Saint-Germain's move for Kylian Mbappe and Financial Fair Play. If Les Parisiens can secure the loan-plus-purchase deal for the Monaco forward, Barcelona may have their man too.

Plenty of players are up for sale in Catalonia this upcoming week, chief among which is Andre Gomes as Juventus aim to tie up a loan switch for the midfielder.

While that deal is not simple, the one to take Rafinha to pastures new is a complete unknown.

Seeking game time ahead of the World Cup, the attacking midfielder's injury is a great impediment to his exit and Ernesto Valverde is pushing for Arda Turan and Douglas to leave the club as well.

Finally, Munir El Haddadi's asking price continues to be a stumbling block in his efforts to gain first-team football with Thomas Vermaelen and Marlon Santos also surplus to requirements.

Barcelona's squad for the remainder of the season will be largely shaped this week by agent Jorge Mendes, who has arrived in Catalonia to work on a double deal - one in, one out - at the Camp Nou.

Andre Gomes is expected to depart for Juventus, while Angel Di Maria's arrival from Paris Saint-Germain is also being worked on and while both situations will be involved in a constant battle against time, Barcelona are hopeful of getting them over the line.

Although Mendes is the agent of the outgoing Gomes, he is no longer Di Maria's representative, but has been brought in to the deal to act as a middle man between PSG and Barcelona, with the relationship between the two clubs being strained.

Both Nasser Al-Khelaifi and Josep Maria Bartomeu are trusting Mendes to push Di Maria's move through.

The player himself is keen to return to Spain and wants to team up with Lionel Messi at club as well as international level, while PSG are hoping to earn around 50 million euros from his sale.

PSG know that this summer will be their last chance to make such a figure from his exit, as his fee would be slashed next summer with the Argentine entering the last year of his contract.

With Ousmane Dembele already arriving and the club still working on Di Maria and Philippe Coutinho, the solution to Neymar's exit is finally edging closer.

Robert: My intention is to sign one more player or two if possible

Following the arrival of Ousmane Dembele, Barcelona's director of football, Robert Fernandez, has made clear his intention to sign one more player and if possible, two.

Neymar's world record sale to Paris Saint-Germain rocked the Catalan club to the very core, there is no getting away from that, however after signing Dembele the club is hopeful of making further progress.

"We are working to sign one more player and if possible, two," Robert explained.

"We know what we want but we will have to wait right until the last moment."

Philippe Coutinho is widely expected to be the main focus of Los Cules' transfer efforts irrespective of Liverpool's rather public declarations that the Brazilian wouldn't be sold.

Robert once again suggested that negotiations were ongoing to secure his signature.

"We are negotiating for the player and we hope to reach an agreement and then introduce him as a new player," he continued.

Angel Di Maria has been mooted as a possible alternative to Liverpool's talisman yet it is expected PSG will also look to make things somewhat difficult for Barcelona.

"The negotiations with players and possible targets will not be mentioned today, the club is working towards signing some players but I do not go into the details of valuations and individuals," he confirmed.

The collapse of Jean-Michael Seri's move to Catalonia has been a source of great frustration and bemusement amongst supporters and the Spaniard made clear another move for the Ivorian would not be forthcoming.

"He is a good player but we have totally ruled him out," he noted.

"We have analysed everything closely and prefer to strengthen other positions."

Real Madrid lost a point to Valencia but gained a genius, Marco Asensio confirming his status as a star with a wonderful double.

Two superb left-foot finishes put the finishing touches to his magic night, his confidence in stark contrast to the failures of Gareth Bale and Karim Benzema, the former whistled throughout.

His first came about by taking advantage of Kondogbia's failure to control the ball, the Estadio Santiago Bernabeu crowd holding their heads in their hands in disbelief at the youngster's talent.

His second was a free-kick that Cristiano Ronaldo would've been proud of.

Asensio demonstrated on Sunday against Los Che is that he is now a starter at Real Madrid.

Not only that, but he has put much more pressure on Bale, especially given that the supporters have taken him to their hearts whilst discarding the misfiring Welshman.

Four goals (and what goals) in five matches, Real's No.20 also showed leadership and assumed responsibility when it was required.

"I feel important, like everyone," Asensio said after the game, even leaving Valencia coach, Marcelino, in his thrall.

With the transfer market still open, Liverpool have offered 72 million euros plus eight in variables for Monaco's Thomas Lemar.

Kylian Mbappe to Paris Saint-Germain has taken precedence for the French club and as such, they haven't yet given Jurgen Klopp a definitive answer on Lemar's availability.

Aware of the pressure that Barcelona will continue to exert right up until the last moment for Philippe Coutinho, the club want to have secured a player who can perform the same functions, but ideally the Brazilian will stay too, reports L'Equipe.

Neymar-Mbappe-Cavani: The most expensive attack in history

They have already pulled off one of the most sensational transfers in history, by bringing in Brazilian international Neymar from Barcelona for a world record fee of 222 million euros, but Paris Saint-Germain haven't finished spending yet, with a deal to sign Monaco's star striker, Kylian Mbappe, already in place.

At a cost of 180m euros, it will mean that PSG will have spent a whopping 402m euros on just two players this summer.

Add in the 64m euros that the French club paid for Edinson Cavani in 2013, the financial cost for this spectacular new attacking trio is a whopping 466m.

The signing of these three players has been particularly impressive given the fact that Ligue 1 is widely considered as the fifth best league in Europe, behind LaLiga, the Premier League, Series A and the Bundesliga.

PSG now have a genuine opportunity at Champions League glory, which is their ultimate goal.

Unai Emery, who knows he has one of the most high pressure jobs in football managing such an expensive array of stars, must also find a way to accommodate Julian Draxler, Lucas Moura, Javier Pastore and Angel Di Maria, the latter linked with a move to Barcelona.

The Argentina international could leave, particularly as the club want to keep in line with UEFA financial fair play rules.