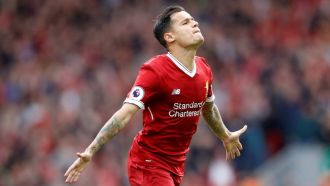 BARCELONA are to launch a final £136million bid for Philippe Coutinho.

The Catalan giants, who have failed with three attempts, believe Liverpool’s Samba ace still wants to leave for the Nou Camp.

And they are ready with a fourth offer of £100m up front with add-ons of £36m — despite telling Liverpool they had made their final bid last week.

The extras involve £9m each time Barca qualify for the Champions League over the next four seasons — which is virtually guaranteed.

Coutinho, 25, who is being offered a five-year deal, has yet to play for the Reds this term due to a ‘back injury’ and team-mates, including skipper Jordan Henderson, have begged him to stay.

But boss Jurgen Klopp last night claimed the player was now “ill” and had “no idea” when he would return.

Asked if he would welcome Coutinho back into the first team, Klopp said: “Of course. You ask if everything is OK between me and him. I answer of course. Yes. Absolutely.”

Pushed further over the transfer situation, the German added: “Nothing has changed.”

Neymar affirms that Barcelona owe him the full 2016 renewal premium

On Tuesday evening, Neymar Jr. and his lawyers released a joint statement in which they assert that they will present their defence to the Barcelona lawsuit and that they will fight in court for the part of the renewal premium from 2016 that has still not been paid.

"We inform everyone that Neymar and his lawyers are aware of the news released today regarding the legal actions filed by F.C. Barcelona before the Courts of Barcelona.

"Following official notification and after full review of the club's claim, the player's formal defence will be filed in due course.

"Regarding the bonuses owed for the execution of the contract of 2016, it is also necessary to inform that the player has already initiated the formal procedures of collection before the competent courts."

Kylian Mbappe is destined to end up at Paris Saint-Germain this summer having previously been close to joining Real Madrid, the Ligue 1 side paying the youngster more than twice the amount offered by the European champions which ultimately swung the deal their way.

The player's salary in Paris will be 15 million euros per year while the transfer fee will initially be set at 150m plus 30m in variables, perhaps eventually rising as high as 200m.

Real were willing to meet the 180m euros asking price set by Monaco, but the disagreements came when negotiating the player's salary.

The Spanish side were determined not to break their current structure, which would only allow Mbappe to receive between six and seven million euros per year.

Barcelona and Manchester City also expressed an interest, but the former opted for continuing their pursuit of Ousmane Dembele, while Pep Guardiola's side were, like Real, put off by the player's financial demands.

Before the French Supercup match between Monaco and PSG, it was made clear by the player's father that his son intended to return to Paris this summer - being Parisian.

As things stand, there is a total agreement with PSG, Monaco and the player happy for the deal to be finalised - only UEFA can prevent it from happening now.

No rush for Messi

Lionel Messi does not believe that now is the time to sign his Barcelona renewal, as he wants to wait to see how the club operate in what is remaining of the transfer window.

Neymar's departure has left the Argentine and many other squad members frustrated and, as stated by Sergio Busquets, the players are expecting arrivals before the market closes, while the club are aware of the need to improve the squad, as was highlighted in Barcelona's Supercopa defeat against Real Madrid.

President Josep Maria Bartomeu understands the position of the players and agrees with Messi in that it would be illogical to prioritise his renewal instead of working on bringing in more players to give depth to the squad.

With a strong sense of nervousness and unrest surrounding the club, Bartomeu knows that new additions are needed.

Furthermore, at the same time as there is the possibility of a vote of no confidence being brought against Bartomeu, recruiting has become increasingly difficult and former president Joan Laporta expressed his belief that for Messi to be happy at the Camp Nou it would take Bartomeu to be stripped of his role.

However, while Messi is annoyed by the current situation, the player is not considering an exit and he remains happy at the club, in spite of the perceived incompetence of those in positions of power.

What is clear for now is that there will be no signature put on Messi's renewal while the market is open, unless the club remarkably close all of their open negotiations in the coming days.

September is likely to be when the deal is confirmed and announced, after Messi returns from international duty with Argentina.

That said, Barcelona's fans could be left waiting a little longer for confirmation, as Messi himself is in no rush to renew, even if all of the terms of the extension have been agreed.

Cristiano Ronaldo responds again: From injustice to injustice, they'll never bring me down

After an official announcement from CAS that they were upholding Cristiano Ronaldo's five-game ban, the Portuguese responded in his usual manner.

Real Madrid had hoped their appeal would be successful but now the player will be out of action until September 20.

"Another incomprehensible decision, from injustice to injustice, they will never tear me down, and as always, I will return stronger than ever, thanks to all those who have supported me," he wrote in his social networks.

The saga of Neymar's move to Paris Saint-Germain has not ended yet as Barcelona file an official complaint to the Spanish FA (RFEF) to redeem the signing-on fee paid to the player at his final contract renewal.

Signing a mega contract extension in October, the Brazilian earned 8.5 million euros as a loyalty bonus from the Blaugrana at the time.

However Barcelona believe that Neymar's termination of his contract via his 222m euro release clause just months later has breached the agreement and deemed the bonus null and void, leading them down the official route to take it back.

The overall cost to the player if the authorities rule in favour of the club would be 9.35m euros, as a 10 percent compensation would be tagged onto the signing-on fee as arrears.

Barcelona have stated that, should Neymar be unable to return the money personally, the onus would fall on PSG to recover the funds.

This comes after the Catalan outfit refused to pay the 26m euro bonus allegedly owed to Neymar's father and agent that falls under the same renewal premium.

They did it the hard way but Sevilla are through to the Champions League group stages after a 2-2 draw on the night against Basaksehir saw them emerge victorious 4-3 on aggregate.

The stadium was bouncing again just before the hour as Sergi Escudero's leveller swung the advantage back in favour of the Andalusians.

Wissam Ben Yedder looked to have wrapped things up but Edin Visca's 82nd-minute equaliser on the night meant a nervy final eight minutes.

There was still time for Emre Belozoglu to hit the woodwork, a shot that, had it gone in, would've sent the Turkish outfit through at Sevilla's expense.

As it is, Eduardo Berizzo's side now await their fate in the Champions League draw on Thursday.