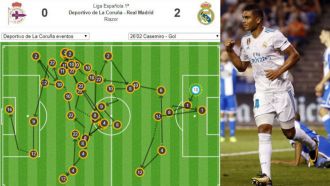 A fine Real Madrid team goal against Deportivo which Casemiro supplied the finishing touch to, was preceded by the highest sequence of passes since the 2005/06 season.

The move began with goalkeeper Keylor Navas and ended with the midfielder netting for his first goal of the new league campaign.

Before he scored, every Real player touched the ball for a total of 44 completed passes in a period of 107 seconds.

The players who touched the ball the most were Isco and Luka Modric with eight apiece, Toni Kroos with six and Casemiro did so just twice.

With the goal, Real have bettered Valencia's goal from last season when Santi Mina scored after 38 passes and 105 seconds of possession.

Valencia were also the victims of a similar goal last season when Las Palmas hit the net after 35 passes, while Barcelona needed 34 against the island outfit when Neymar provided the finish.

Zidane: I like this squad as it is and I hope no changes are made

After his Real Madrid side kickstarted the season with a win, Zinedine Zidane insisted that he was very happy with his current squad and hopes no tweaks are made to it.

Los Blancos began the defence of their LaLiga crown with a 3-0 away win over Deportivo.

Following the game, the Frenchman was keen to pay tribute to the players who have excelled since he took over.

"I'm happy with the way the game went but not for what happened with Sergio [Ramos' red card]. In general we are pleased because this isn't an easy place to come to and they are a team who can cause you problems," he said to reporters.

"Nobody has asked to leave and I want this squad as it is. I hope there aren't any changes made but until August 31, anything can happen."

The Frenchman, who refused to comment on Ramos' sending off as he did not see the incident, was also pleased with Casemiro's goal, which was the product of some fantastic teamwork.

"We know that we have the players who are capable of helping us do it. It is something we work on so we are all satisfied."

Valverde: Barcelona have lost depth without Neymar and now we must find it

Although he started his Barcelona tenure with a 2-0 win over Real Betis in their season opener, Ernesto Valverde admitted that he is still not entirely satisfied with his squad.

Much of that relates to the departure of Neymar for Paris Saint-Germain, which has left the Blaugrana short of options in attack.

That was showcased all the more following an injury to Luis Suarez.

"In the end, no matter how you play, the style is still the same and we need players to help us," Valverde said to reporters afterwards.

"We have lost some depth with Neymar leaving and we need to look at getting that back. We must always be together to help each other in good positions and, of course, be well organised in defence."

Valverde also elaborated at length on his plans for Messi and whether he would be utilised as a false nine going forward, after he impressed in that role against Betis.

"It is one of the possibilities that we looked at, having him act as a false nine to take advantage of the speed of Pace [Alcacer] and [Gerard] Deulofeu in wide areas," he continued.

"We already tried it during pre-season and I thought it helped us as overall we were good and dominated the game.

"I think we showed we can certainly use Messi in that way but I'm not going to tell opposing teams all of our plans but it is an advantage for us that we can use him there.

"A lot depends on the position and the situation but everyone has the freedom to attack. We are always looking for players to reach scoring positions, which can be done from various areas."

Real Madrid forward Gareth Bale returned to the starting lineup in fine style by scoring his side's first LaLiga goal for the third season in succession away to Deportivo La Coruna on Sunday.

It was his first start of the campaign following his comeback from injury and he put his side ahead by knocking the ball home after Luka Modric and Karim Benzema both had shots saved midway through the first half.

Last season it was Bale also who got the team's first league goal against Real Sociedad and he ended up that match with a brace as Real won 3-0.

Two years ago he also got the team's first league goal against Real Betis after the first match of the campaign ended 0-0.

The goal will boost the confidence of Bale with plenty of competition for places in the side and rumours that he could be subject of a move to Manchester United.

For all the talk of crisis at Stamford Bridge following last week's meltdown against Burnley, Chelsea manager Antonio Conte was left saluting his side on Sunday after they edged Tottenham Hotspur 2-1 in a match they could just as easily have lost.

"I think I must be pleased," said Conte, whose nine-man side were beaten 3-2 by Burnley in their opening match of the new Premier League season.

"I want to thank my players because they showed me great desire and heart and I saw today the fighters."

The Italian was particularly pleased because the champions were without the suspended Cesc Fabregas and Gary Cahill, giving Tiemoue Bakayoko his debut and trusting Andreas Christensen at the heart of their defence.

But it was a couple of old hands in David Luiz and Marcos Alonso who stood out.

The Brazilian was pushed forward into midfield and had a hand in both goals. Chelsea made the breakthrough against the run of play on 23 minutes when Alonso thumped home a superb free kick from 20 metres after Dele Alli had fouled Luiz.

But Luiz also stood strong when Spurs threatened to overrun Chelsea with the quickfire passing that served them so well last season.

"David played very well, it was an amazing performance from him," said Conte.

"He played with great experience and personality, a point of reference for other players. But it is easy to forget we had four new players from last season and we played like we wanted to show we were champions."

Conte again said the club were working towards strengthening the squad in the transfer window, with at least three arrivals expected.

"For us it is very important to be focused on ourself. We know a lot of teams have improved since last season," he said.

"The club is trying to do its best in the transfer market but today I must be satisfied with my players because they gave me everything."

Striker Zlatan Ibrahimovic will sign again for Manchester United as he continues to recover from a knee injury, according to ESPN.

The Swede had various offers after his previous deal with United finished at the end of last season but he has continued to train at their Carrington facilities and now has agreed a new contract which is set to see him earn a lot less.

Ibrahimovic scored 17 goals in 27 games in the Premier League last season and 28 in all competitions.