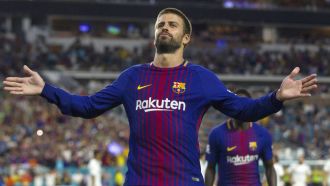 Goals from Messi and Rakitic were pulled back by Kovacic and Asensio before Piqué settled matter in the second half in Miami.

The first Clásico in 35 years not on Spanish turf did not disappoint as we saw four goals in the first half and just the one in the second with plenty of chances with a mixture of poor finishing, poor luck and excellent goalkeeping to reason for that.

In the end he managed to get back on the field and just as he did, after four minutes, Messi gave Barcelona the lead with a deflected shot off Raphael Varane.

Just minutes later, Barcelona were in again and Ivan Rakitic doubled their lead with a rasper on seven minutes. We hadn't played 10 minutes and Barcelona has two goals and barely given Real Madrid a touch.

The reigning Liga and Champions League champions were not set to be embarrassed regardless of the authenticity of a preseason friendly Clásico. After 14 minutes, Mateo Kovacic made a strong run towards goal and drove low and beyond Jasper Cillessen after seeing off a couple of tackles and Real Madrid had finally settled down after a shaky start.

They had their second goal on 36 minutes when Real Madrid broke from a corner and Marco Asensio, the architect of the counter, wound up finishing it too. Jordi Alba misread the ball's path and Asensio waited patiently for it to roll to him before he stroked past Cillessen. It was 2-2 and there were plenty more chances as neither team seemed to intent on defending too rigidly.

the second half was just five minutes old when Neymar put a free onto the instep of Piqué foot and he finished with ease to help Barcelona sneak their head back in front again. 3-2.

Neymar had his own chance but missed a one-on-one with Navas without hitting the target and just minutes later drove a shot over from a decent position.

There were countless more attacks and chances with Cillessen making an excellent save from Isco on one occassion. But we didn't see anymore goals, which seemed like a miracle as Barcelona claimed bragging rights in the first Clásico of the season.

With the preseason over for Real Madrid and Barcelona, attention now turns to the European SuperCup for the former and the Spanish SuperCup for the latter. If this game is anything to go by, and it probably isn't, we might be in for some hot and heavy clásicos this season.

Dani Alves: I told Neymar that this world is for the brave

A reunion with Dani Alves in Paris is one of the options available to Neymar this summer, although the Brazilian right-back is trying not to influence his friend's decision.

Alves has only told the forward to be brave in whatever decision he does make, while also trying to keep him grounded.

"I speak with him every day, but not always about football," Alves said after scoring in and winning France's Super Cup, the Trophee des Champions, with his new team.

"I try to keep him calm because in these times when you listen to people from all over you can go crazy.

"You have to be selfish because the clubs don't think of you once you don't produce results, as I am an example of.

"I told him one thing, which is to be brave, as this world is for the brave.

"Decisions are for the brave and I am the bravest, deciding to leave Barcelona and Juventus.

"He must now make a decision to keep progressing.

"I just want my friend to be happy wherever he is, although if that is here then that's obviously better. "

Asked about how much influence he holds, Alves made it clear that this was Neymar's choice to make, not his.

"I hope [Neymar signing for PSG] happens, but I don't have anything to do with his decision," the player said.

"It is an important decision for him and these are the types of decisions that men must make.

"He is one of my best friends and I always want my friends by my side, but I can't interfere in his decision."

However, back when Neymar moved from Santos to the Camp Nou in 2013, Alves did have some bearing on the outcome.

"I helped him to come to Barcelona," he explained.

"I didn't make the decision for him, but I told him what there was in Barcelona and he decided to come."

Alves' comments were made as Neymar was preparing for the Clasico in Miami, potentially his final game in a Barcelona shirt.

Former Barcelona and Paris Saint Germain footballer Ronaldinho Gaucho recommended that his Brazilian compatriot Neymar "follows his heart" over deciding which club to play for.

"He needs to follow his heart and be happy, do what his heart tells him," Ronaldinho told a press conference in the Honduras capital Tegucigalpa.

Neymar's future is up in the air at Barcelona due to the interest from PSG who are seemingly ready to pay his buy-out clause of 222 million euros.

Ronaldinho is in the Central American country to play a friendly on Sunday between local side Motagua and Real Espana as well as talk to local children.

The player, who was named Barcelona ambassador for ten years, says his plan now is to open football schools around the world.

"I am old, it is difficult to stop playing football because it is what we love most," said Ronaldinho.

"I want to spend time doing other things to contribute like football schools."

"I hope everyone goes to the stadium and that it will be a great party," said the 37-year-old.

Ahead of Saturday's Clasico in Miami, Sergio Ramos will be keen to play his first preseason minutes against the Real Madrid's arch rivals.

Ramos is poised to kick-off another campaign as captain of Los Blancos, especially after a hugely successful season last time out.

"Every year is different, when you win everything it's much better," he said.

This upcoming season presents as a new challenge for the 31-year-old, but the defender still remains in good shape for the highest level.

"You have to keep that ambition intact but when you are happy the body asks you every year," said the former Sevilla man.

"I'm happy in this sport and I will try give my best level for as long as possible."

Madridistas in South Florida will be excited for the club's next friendly match, although a fixture with Barcelona is never a friendly.

"It's not as demanding as in the season, but knowing that you have games like this, you put a lot of emphasis on it," the captain affirmed.

"It's going be like this all season, It's always good to face the best."

Another talking point circulating is the proposed arrival of Kylian Mbappe from AS Monaco yet Ramos believes it's not worth speaking about players who are yet to sign.

"Talking about players who do not belong to our club is a waste of time," said the Spain international.

"He is a great player, but we have been doing things very well and the squad is very good.

"Any player who has come here has been welcomed. Making speculations with this is wasting time."

The Frenchman at 18-years-old has the world at his feet, and so the centre-back projected some insight and advice for other young hopefuls wishing to make that huge step.

"Sport and training are the two fundamental things," he said.

"It should be humble and with work and consistency, then these dreams are almost always achieved."

Ramos has also been on some adventures of his own this summer, with a trip to South America to support those in need.

"This year I went to Peru because it is a country that has suffered a lot," explained the Galactico.

"We have to be supportive and Peru needed perhaps more help than other countries and I wanted to be there to know everything better."

As for continuing strong in the offseason, after an expected 4-1 loss to Pep Guardiola's Manchester City in Los Angeles, the Los Blancos will be keen to move on.

"We do not like to lose even in a friendly." He said.

"We have to give it the importance of the last defeat because we are working to recover the physical tone, but tomorrow if we get a goof result it will be better."