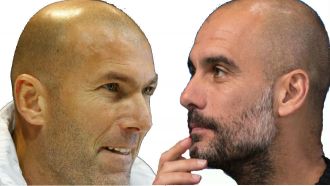 The first face to face

Real Madrid will take on Manchester City in the United Stated on Friday (8:00 CET), as Pep Guardiola and Zinedine Zidane meet for the first time.

With a capacity of 93,000, the Memorial Coliseum in California will host an exciting duel between two of Europe's elite teams and two of most successful coaches of recent years.

After completing a historic Champions League and LaLiga double last season, the Frenchman is the man of the moment whilst Guardiola, after making history with Barcelona, is now set to attempt to bring City to European football's highest peaks.

On the pitch, the two leaders have encountered in some memorable battles due to their overall success, but also their idea of playing the game a certain way, with possession being a key for coaches who boast two Champions League trophies leading their squads and as individuals also.

After four years in charge at the Camp Nou, three seasons at Bayern Munich, and into his second in Manchester, Pep is considered the veteran of two, with a better record.

Nonetheless, Zidane is following in the Spaniard's footsteps with a similar career path.

The pair made the journey to coach their respective first team's in LaLiga via its reserve side, with the only difference being that the Los Blancos coach arrived during midway through a season.

However, in his year and a half in the Spanish capital, his numbers are unrivalled, and so, regardless of titles, we can now talk of the great Madrid side of Zidane, similar to how we previously spoke of the Barcelona of Pep.

Real are now the team to beat in Europe and the 45-year-old's next challenge is to match Pep's six titles (LaLiga, Spanish Cup, Champions League, two Super Cups and the World Club Cup) in one year.

Starting with Manchester United on August 8 in the European Super Cup, the dream can begin for the Galacticos, but for now, they must continue their hard-work during preseason.

Coutinho, substitute or bait for Neymar?

Barcelona are working on a two-pronged strategy that involves trying to seduce Neymar on one hand to stay while on the other to bring in Liverpool's Coutinho as a replacement if he does in the end leave for Paris Saint Germain.

The Catalan club are negotiating with the agent of the Liverpool midfielder with those two options on the table and according to RAC1, the agreement with Coutinho has already been finalised.

However, the Reds will not let him depart easily this summer as they are keen to retain their prized asset going forward.

If Neymar leaves the Camp Nou, Barcelona would need to have an attacker in their ranks who would be a guarantee on the left wing and not a gamble with Coutinho filling that requirement, while if he stays then they could still use the Liverpool man in a deeper central role.

Coutinho could offer competition for places in midfield with Andres Iniesta entering the twilight of his career and Arda Turan set to leave having failed to settle in. Last season Coutinho scored 13 goals in 31 Premier League games while he also has 26 caps for Brazil.

Even though there is a good relationship between Barca and Liverpool dating back to the transfer of Luis Suarez, the Merseyside club are still seeking 80 million euros for Coutinho who renewed his contract until 2022.

Barcelona striker Neymar has been cleared of any criminal charges in a long-running tax evasion case in Brazil, a Brazilian court said on Wednesday.

A judge in Sao Paulo said there was a "lack of just cause" in the case that alleged he underpaid income tax between 2011 and 2014.

"It is with great happiness that we received the news of the shelving of the Public Ministry's case of tax evasion," Neymar Snr. said in a statement sent to Reuters.

"The process is officially closed (and) that proves the legality of all our acts."

Neymar could still, however, have to pay substantial sums to Brazil's tax office.

Brazil's federal tax office charged Neymar in 2015 with evading 63 million reais ($19.94 million) in taxes due on income earned from the Santos and Barcelona soccer clubs and sponsors between 2011 and 2014.

Neymar appealed last year and a court ruling in his favour in March halved the penalty of 200 million reais in fines, back-taxes and interest that Brazil's tax office had slapped on the player.

This was separate to the criminal prosecution brought by federal prosecutors, which has now been shelved.

"These were four years of unfounded accusations that me, my family and the employees of my companies suffered through, in every possible way," Neymar's father said in his statement.

"Although many people doubted it, there is justice in our country. Charge by charge, one after the other, they were knocked down by our defence, leaving it explicitly clear that we did not avoid paying one cent of tax.

"I hope we can now concentrate on our work and that my family has the peace it deserves."

Neymar's future on the pitch is the subject of speculation, with the player linked in Spanish, French and Brazilian media with a transfer to Paris St Germain.

Neymar, an idol in Brazil who led the Olympic team to glory at the 2016 Rio Games, said last week he was happy at Barcelona but he has yet to state definitively where he will play next season.

Widely considered the outstanding player of his generation in Brazil, Neymar led Santos to the Libertadores Cup for the first time since Pele played for the club.

He then moved to Barcelona in 2013 where he has formed one of the most deadly forward lines in football alongside Lionel Messi and Luis Suarez.

He is currently on a pre-season tour with Barcelona, where he has won two La Liga titles and a Champions League, in the United States and is expected to play in Wednesday's match against Manchester United in Maryland.

With Keylor Navas and Kiko Casilla established as Real Madrid's first and second goalkeepers, Luca Zidane has emerged as the club's third-choice between the sticks.

It has been agreed by the coaching staff during their preseason tour in the United States that Zinedine Zidane's second eldest will make the jump up to the first-team, whilst also spending time with Castilla.

"I am good in one against one's and in the aerial game," the young goalkeeper told the club's official website.

After spending the last two season's guarding the Los Blancos reserve's goal, Ruben Yanez will be replaced by the 19-year-old who is expected to feature for the team when fixtures do not clash with the senior squad.

Just like Yanez, the young Frenchman will train with the first team whilst representing the Segunda Division B side.

According to calculations, the Marseille-born player will miss a maximum of ten games, which leaves Santiago Solari with the opportunity to share minutes with the side's other stopper Javier Belman.

It's an exciting chance for the son of the coach at the Estadio Santiago Bernabeu, who will be keen to impress after spending 13 years in the Spanish capital already, since joining the club at the age of six.

When Barcelona signed Luis Suarez to make a potent trident with Lionel Messi and Neymar, comparisons were instantly made with Real Madrid's Cristiano Ronaldo, Gareth Bale and Karim Benzema.

The two trios have been continuously matched up in terms of goals, assists, chances and minutes played, but 2017 might signal the end of this legendary football skirmish.

While Los Blancos have already agreed terms with Monaco for the acquisition of Mbappe, Paris Saint Germain seem eager to meet Neymar's 222 million-euros release clause and the tridents could even be renamed to BBCM and MS in the near future.

The addition of the French striker would probably see the playing time of Isco and Marco Asensio reduced, as none of the aforementioned quarter could be easily benched.

Paulo Dybala and Philippe Coutinho are said to be on the Blaugrana's radar as Neymar's potential replacements if he does finally decide on Paris.