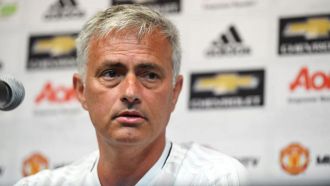 Mourinho: It was Real Madrid's right to demand the fee they wanted for Morata

Alvaro Morata was so close to becoming a Manchester United player, yet negotiations between Real Madrid and the English club broke down when a fee could not be agreed upon.

Speaking about the discussions over Morata on Friday night, Jose Mourinho stated that it was justifiable for Real Madrid to hold out for the amount they wanted.

"We had interest, that is obvious and it's public," the United coach said during a press conference in Los Angeles, where Los Blancos are also training.

"We did not come to an economic agreement and that is obvious as well.

"But it is Real Madrid's right to ask for the amount of money that they want for their players.

"We do not determine what the price is of a player of Real Madrid.

"I do not criticise Real Madrid and I am not going to criticise my board because my board made the offer and have tried to reach an agreement.

"They simply didn't come to an agreement."

Mourinho was also asked about the upcoming UEFA Super Cup clash against Morata's employers, a fixture he is looking forward to.

"There is nobody better to play against."

That fixture takes place in Macedonia on August 8.

Real Madrid will wait for Mbappe until August 31

Kylian Mbappe remains a top transfer target for Real Madrid and they are working with the mindset of no rush, but no pause.

Ever since the millions of Paris Saint-Germain and Manchester City started following the 18-year-old Monaco forward, Real Madrid have known that the process could drag on right to the end of the current window, and they are very much prepared to wait until then.

At the very least, they hope they can seal a deal by the deadline day of August 31 to ensure his arrival in time for the start of the 2018/19 season.

Not even the player himself knows where he'll be playing his football next season, so there is a long way to go in this particular transfer saga.

He has previously expressed his desire to join Real Madrid, but this isn't enough to make such a monumental transaction happen overnight and Los Blancos have been consistently making gestures towards the player to demonstrate to him that they remain interested.

As much as Mbappe's father would like him to join the club from the French capital, the player has long admired Real and his mother would also prefer to see him in white.

So too would Monaco's Dmitry Rybolvlev, who wouldn't want to sell his star to a domestic rival and who could sell him to Real Madrid at a lower price - although it would still be at least 120 million euros.

For the Real directors, they are hoping to persuade Mbappe of the sporting benefits of moving to the Estadio Santiago Bernabeu, as they don't want to consider equalling the wage offers of PSG and Manchester City, ones which would, if matched, see the teenager earn over a million euros per month, an amount only Cristiano Ronaldo earns in the Spanish capital.

Mbappe wants to be guaranteed some playing time wherever he goes and that is one reason why his arrival at Real Madrid could be dependent on the exit of Alvaro Morata or of Ronaldo, neither of whom is certain to stay or to go.

There is a long way to go in this one, but Real Madrid are more than ready to play the long game.

Real Madrid train with the ball under Zidane's watchful eye

Zinedine Zidane took charge of Real Madrid's training session on their third day of pre-season in the Los Angeles and he had his players work primarily with the ball, first with some dribbling exercises around cones.

The outfielders then lined up in and trialled some 11-men formations as part of an intense workout.

Half an hour of the session was open to journalists and during that time Zidane was seen gathering all of the players together on two occassions to correct mistakes he had seen.

He was seen giving instructions to his squad throughout.

It has been a busy day in the transfer market, with the confirmation of the signings of Dani Ceballos, Nelson Semedo, Kyle Walker and Leo Bonucci, but there have been plenty of rumours too, the highlights of which were:

- According to the Gazzetta dello Sport, AC Milan now want to sign either Kalinic to Aubameyang to further strengthen their squad.

- Sky have reported that Diego Costa will not be travelling with Chelsea on their pre-season tour, so that he can resolve his future.

- Manchester United may have already spent 115 million euros this transfer window, but the Daily Mail report that they could spend another 100 million euros in signings.

- Tuttosport are reporting that Juventus are already working to replace Bonucci and that they have three candidates: Atletico's Jose Maria Gimenez, Real Sociedad's Inigo Martinez and Southampton's Virgil van Dijk.

- Manchester City are reported o be back in the race to sign Kylian Mbappe, say L'Equipe.

Marcelo: I haven't spoken to Ronaldo, but he knows we're with him to the death

Cristiano Ronaldo may have been linked with a move away from Real Madrid this transfer window, but Marcelo has insisted that the players have got the Portuguese forward's back and that the squad is just as united as it was before the summer break.

Although the left-back hadn't spoken with his colleague about a potential exit, he had a message for him during the pre-season tour, which Ronaldo isn't yet a part of due to his Confederation Cup exploits.

"I haven't spoken to Ronaldo about this subject, but he knows his teammates are with him to the death," Marcelo said at the first press conference of the season, when asked about the speculation linking the player with a transfer away from Los Blancos.

"When he arrives, we can then talk about him and see how he is."

One transfer which has come to fruition has been that of Theo Hernandez and the Brazilian addressed the new competition he'll have for the left-back spot.

"Ever since I arrived I have had to fight and do everything to be able to play, even if there wasn't another left-back," he said.

"Theo is very young and he's going to help Real Madrid a lot.

"He has my total confidence and that of the coaches."

Looking forward to the new season, Marcelo insisted he is just as motivated as he always has been, even coming off the back of the 2016/17 double.

"I approach every season with the same excitement," he stated.

"It's true that I've been here many years, but in each season I give my all and I want to teach the young players of my experience at this club.

"My motivation is always the same and I'll fight to the death with my team.

"We were able to win two titles [last season], but we know we can improve.

"It's difficult to better what we've done, but we've learned things and will try to win all titles possible.

"The key is hard work and we need to continue with this, with work, work, work."

Los Blancos are currently training at the UCLA facilities in Los Angeles, ahead of their friendlies in the Unites States.

Barcelona were celebrating the signing of Nelson Semedo on Friday, but already there was some looking ahead to the future and to the other possible ways the Catalan club can strengthen this summer.

Director Roberto Fernandez answered questions at the right-back's presentation and he was asked about the ongoing pursuit of Marco Verratti and whether the Blaugrana were any closer to making a deal happen.

"He currently has a contract [with PSG], so there is little I can say," Fernandez told reporters.

"If you want to make something happen with a player who has an ongoing contract then you first need to come to an agreement with his club."

Despite the difficulties in that specific case, Fernandez was confident that new arrivals would touch down in Catalonia before the end of the window.

"I don't like to rush things and we have a lot of time ahead of us," he explained.

"In Spanish football in general, there haven't been many major signings.

"Things will happen between now and the end of the transfer window.

"Sometimes we forget about what we already have, which is a magnificent team, with high-quality players.

"We just need to get it right with three or four players who could come.

"If a good opportunity arises for the club then we'll try to make it happen."

Of course, the hero of the day was Semedo, the right-back signed from Benfica, and Fernandez spoke at length about the quality he can bring with him.

"There is reason to be satisfied and content," he said.

"We welcome Semedo, who is excited and keen to get to work."

Asked about the hold-up in confirming the transfer, Fernandez pointed to paperwork issues.

"When signing a foreign player it's not uncommon for there to be difficulties, but we've been able to solve them," he replied.

"Everything has gone very quickly.

"We knew we were going to get this deal done, as it was just a matter of paperwork."

As for the issue of whether Semedo was Barcelona's second-choice right-back option and of whether he was only signed because of the impossibility of prizing Hector Bellerin away from Arsenal, the director didn't buy that suggestion at all.

"When you go to the market, you don't think about first choices of Plan As or Plan Bs," he stressed.

"[Semedo's name] has always been on our mind for his physical attributes and we don't think he'll have any problem adapting."

"Other names were mentioned, but we've been monitoring Nelson [Semedo] for some time."

He also dismissed the notion that Semedo's arrival implies that Aleix Vidal will be leaving.

Email : [email protected]
Προηγούμενο : Morata is the Mbappe that Zidane can call upon | Επόμενο : Bonucci calls Morata to ask him to move to AC Milan
Προβολές : 443
- 4197 προηγούμενη ημέρα