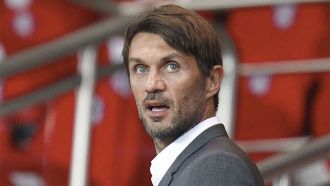 Maldini: Barcelona is the ideal destination for Verratti

Thursday, 15 June 2017
Marco Verratti is one of the most sought-after players in this summer's transfer window, as the Italian midfielder continues to garner strong interest from Barcelona, and icon of Italian football Paolo Maldini has offered his opinion on his countryman's potential switch to the Catalan giants.

The retired defender suggested that a move away from Paris could be the best thing for his career.

"Verratti is extraordinary, with qualities that I appreciate very much, and I think he is destined to improve if he leaves Paris [Saint-Germain] to try a new experience," Maldini told Calciomercato.com.

"Barcelona would be, of course, an ideal destination for him and I think he too would be a perfect player for Barcelona."

Despite the interest, the French club are not at all keen on selling one of their star men.

Over the course of the 21st century, Real Madrid have become renowned for splashing the cash in the transfer window, but this year the shoe is on the other foot and they are one of the teams selling players, which could bring in a whopping 160m euros.

By the end of the current transfer window, a total of six players could have departed the Estadio Santiago Bernabeu, namely Fabio Coentraro, Pepe, James Rodriguez, Alvaro Morata, Diego Llorente and Mariano Diaz.

In the case of Coentraro, he appears set to join Sporting CP on loan, while Pepe's contract will run out at the end of June and he is Paris-bound.

As for the other four players, their exits could bring in significant cash.

Los Blancos don't want Morata to leave for less than 90m euros, but he is keen to go and there is a strong link with Manchester United.

Another significant windfall could come if James does indeed depart the Spanish capital, with Real Madrid hoping to recoup the majority of his 2014 transfer fee by taking 70m euros in exchange for the Colombian's signature.

Llorente's fee won't come close to those sums, but the 8m euros Real Sociedad are expected to pay for him will still be welcome, as would the 5m euros Mariano Diaz would be allowed to leave for - although his deal would likely include a buy-back clause.

Adding all of these quantities up, a total of around 160m euros is reached - and that's assuming Real Madrid allow Morata to leave for a little less than their current evaluation.

That would make 2017 the record summer for sales, beating the 113.5m brought in four years ago when Mesut Ozil and Gonzalo Higuain were the headline departures, and it could allow those in the club hierarchy to entertain the thought of bringing in both Kylian Mbappe and Theo Hernandez, with some change still left over.

Cristiano Ronaldo: I have a clear conscience

In his first public appearance after being named by Spanish prosecutors in a tax fraud case worth 14.7 million euros, Cristiano Ronaldo has expressed his confidence in his own actions.

A ceremony for the Portuguese national team on Wednesday honoured coach Fernando Santos and involved the Real Madrid winger amid the public battle he faces with tax authorities.

"I have a clear conscience," Ronaldo replied when asked by a Deportes Cuatro journalist about the scenario.

Later in the afternoon, the Portugal captain attended a Lisbon event for a group of children with disabilities, smiling and taking photographs with the youngsters.

Do you remember when Mbappe celebrated like Cristiano Ronaldo?

Kylian Mbappe scored 26 goals last season and Europe's top clubs are hoping he'll be doing likewise for them next year, but if he moves to Real Madrid he might have to be careful about how he celebrates them.

Last summer, at the Under-19 European Championships, the French teenager imitated Cristiano Ronaldo's famous jump-and-pose celebration when he found the back of the net.

He has admitted on more than one occasion that the Portuguese forward is one of his idols and he even got to meet him in Madrid on one occasion, but he could have to come up with an original celebration if he finds himself in the same team as the No.7 next season.

Tolisso comes from French Ligue 1 club Olympique Lyonnais, which he joined as a teenager. He became the club's biggest transfer, beating the previous mark of 40 million spent on Javi Martinez in 2012.

The French club said in a statement it was also its own biggest transfer to date and could bring in another 6 million euros based on incentives included the deal with Bayern.

"I had a wonderful time at Olympique for which I am thankful. Now I look forward to playing at one of the best clubs in Europe," the player said in a Bayern statement.

"I have set big goals for myself at Bayern. Today is a big day for us."

Bayern have won the German league a record five consecutive times but have not made it past the semi-finals in the Champions League since last winning the title in 2013.

Southampton sacked manager Claude Puel after less than a year on Wednesday as the Frenchman paid the price for a dismal end to the season.

Puel led Southampton to the League Cup final in February, but a 3-2 defeat to Manchester United ended his hopes of silverware and was followed by a woeful run of results in the run-in.

Southampton won only one of their final eight league games, scoring just one goal in their last five home matches. They finished eighth in the table with their lowest points tally in four years.

"Southampton Football Club can today confirm that it has terminated the contract of Claude Puel with immediate effect," the club said in a statement.

"Everyone at Southampton would like to express our thanks to Claude for his hard work and commitment this year."

Following the departure of Ronald Koeman to Everton, the 55-year-old Puel joined the club last June, after spending four years at French side Nice.

The club had finished sixth under Koeman in 2015-16, but Puel's league results were mixed throughout the campaign.

He did enjoy success in the League Cup, however, eliminating Arsenal in the quarter-finals, before beating Liverpool home and away in the semi-final to get to Wembley.

Their run was halted in the final, however, as United's Zlatan Ibrahimovic scored twice, including an 87th-minute winner.

"The highlight of the season was a memorable day at Wembley in the EFL Cup final, a day our fans will always treasure," Southampton added in their statement.

Former Southampton great Matt Le Tissier told Sky Sports that it was Puel's failure to entertain fans that ultimately cost him his job.

"I think the main sticking point was the lack of goals and the lack of entertaining football," Le Tissier said.

"No goals in the last five home games was a big factor. I am afraid that was what cost him his job.

"There is a lot of sympathy when you look at the eighth-place finish and cup final. On paper, it doesn't look a bad season, but if you have watched a lot of games this season, it has been a backward step."

The club said the search for a new manager was already underway and they were confident of finding the right fit for the club's "long term vision".

Eusebio Di Francesco promised to bring his attacking philosophy to AS Roma as he was officially presented as their new coach on Wednesday.

The 47-year-old is the eighth coach to occupy the hot seat in the last nine seasons and said he would not be overawed by the club's reputation as a tough taskmaster.

Roma have been desperately trying to end Juventus's dominance of Serie A but have so far been unsuccessful, finishing second to the Turin side three times in the last four seasons.

Juve have won Serie A for the last six seasons and have won the Coppa Italia as well in the last three.

Di Francesco was previously coach of Sassuolo, leading them out of Serie B and establishing them in the top flight during two stints which lasted a total of five years.

He was sacked in January 2014, but was reappointed only six weeks later.

"Obviously coaching at a smaller club is different to coaching at a big club and you might change tactics for that reason," Di Francesco told reporters.

"But even when I was at Sassuolo I never set out to play defensive football against anyone. We won't change our way of playing just because the stakes are higher. We'll play attacking football and try to take the game to our opponents."

He was not prepared to promise the Serie A title, however.

"We're not going to come out and start making bold statements," he said. "We just need to get our heads down and focus on working hard - that's what will get us results. I know what the fans would like, and what we'd all like."

Roma's last major title was the Coppa Italia in 2008 and, since then, Claudio Ranieri, Vincenzo Montella, Luis Enrique, Zdenek Zeman, Aurelio Andreazzoli, Rudi Garcia and Luciano Spalletti have all tried and failed to add to the trophy cabinet.

"There are lots of problems that I'm not even thinking about," said Di Francesco.

"I know there will be easier times and tougher times...

"The atmosphere in Rome may not be the easiest but I'm calm and looking forward to getting stuck into this fantastic experience."