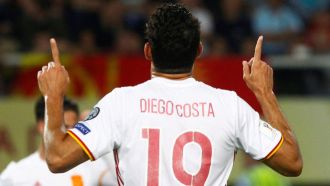 Diego Costa: Chelsea must know what to do and I await their decision

Monday, 12 June 2017
After grabbing the winning goal for Spain in a 2-1 win over Macedonia, Diego Costa firmly placed the ball in Chelsea's court in relation to his club future.

The striker turned in an Isco cross for a first half goal which proved to be the decisive strike for La Roja in a difficult game in Skopje.

Having revealed that Chelsea boss Antonio Conte told him he no longer has a future at the club, the striker expanded on those comments.

"I have two years left on my contract at Chelsea so they have to know what to do with me," he said to reporters after the match.

"I now have to wait for the club's decision."

Costa was very pleased to avoid a potential banana skin against Macedonia.

"It was a very important win and one that we knew wasn't going to be easy," he added.

"Look at the second half, after playing well in the first it was then very complicated.

"We knew how important the game was and everyone was very focused; it was vital that they [his teammates] didn't pick up a card."

Mourinho to Morata: You are going to be important here

It has not been a simple decision to leave Real Madrid, but Alvaro Morata wants to feel important and to have minutes in decisive matches, something that Jose Mourinho will give him at Manchester United.

The striker is fed up with playing only when others need to take a rest and for this reason, he told the Los Blancos hierarchy of his intentions on Friday morning.

Before Juanma Lopez, his agent since the age of 14, passed through the offices of the Estadio Santiago Bernabeu, the player received a call that cleared any doubts he might have had regarding what could be his next destination.

"Come to me, you will be important," Mourinho told him directly.

The Portuguese has been very sincere in the two communications he has had with Morata and the coach has made him see, in a conversation where respect for Real Madrid has prevailed above all, just what type of role he would be expected to fulfil.

Mourinho wants Morata and intends to use him as a reference point for his attack.

He has made it very clear how and where he wants the Spaniard's presence in the English team, and the striker will be handed the responsibility to lead the attack at United.

The Portuguese reminded him that it was whilst he was on the bench at Real, Morata signed his first professional contract.

Mourinho believes that the striker has evolved as a player too, and now he has moves that make him a true No.9.

His passing through Italy has led him to know how to play with his back to the goal, and, together with his physical power and that learning in hand, we now see a stronger Morata than in the past.

In addition, the coach has made him see the quality that Manchester United will have next season.

He has told Morata that the club is going to return to be powerful, and with the first goal of sealing the Premier League but not forgetting the Champions League, although the latter is a longer term goal.

The striker, in addition to listening, has wanted to know the opinion of the Spanish players at United, with Ander Herrera and David de Gea making the greatness of the English team very clear.

On Monday, a new meeting will take place between the agent of the player and Real, at which time the offer of the English club, which Madrid hopes will reach the 90 million euro mark, will be forthcoming.

Everything indicates that the proposal from United will be around 70 million.

Morata to be the most expensive Spanish footballer in history

Upon signing for Manchester United from Real Madrid, Alvaro Morata will become the most expensive Spanish footballer in history.

Jose Mourinho wants to strengthen his team with the striker and hopes to close the transfer for less money than the 90 million euros that Real Madrid are asking.

The agreement between the player and Manchester United is total and his departure, imminent.

In fact, Morata has already informed Real of his plans and everything indicates that the deal will close at around 70m, a figure that would surpass the 58.5m that Chelsea paid Liverpool for Fernando Torres.

The list of most expensive Spanish players in history is completed by Gaizka Mendieta's transfer to Lazio from Valencia for 48m, Juan Mata, who left Chelsea for Manchester United for 45m and David Villa/Javi Martinez who cost 40m to Barcelona and Bayern Munich respectively.

Determined to return to the Champions League, AC Milan are embarking on an ambitious summer revolution under their new Chinese owners.

Rossoneri Sport Investment Lux forked out 740 million euros to take control of the sleeping European giant and they are now prepared to splash even more cash in order to make the team competitive again.

Already 16 people have been let go from the directive and the coaching staff, with Marco Fassone taking on control of the project.

In terms of arrivals, Genaro Gatusso has come in to coach the youth team, while there are five new faces on the board, with Roberto Capelli, Paolo Scaroni, Lu Bo, Xu Renshuo and Marco Patuano all being handed roles.

As for the playing staff, Mateo Musacchio, Ricardo Rodriguez and Franck Kessie have arrived already, the first two cost 18m euros each and the latter joining on an 8m-euro loan from Atalanta, with an obligatory option to buy.

A summer move could be on the cards for Marco Verratti, with the Italian midfielder reportedly having told Paris Saint-Germain that he wants to leave the French capital.

Antero Henrique has only just taken over from Patrick Kluivert as the Ligue 1 club's sporting director, but already he has a huge decision to make after the player made his intentions clear.

According to L'Equipe, he is keen to begin a new chapter in his career and Italian media have confirmed that he held a meeting with Henrique to ask for an exit.

However, his future remains uncertain and the club's president Nasser Al-Khelaifi opposes his sale, one which would, in any case, require an offer of around 80 million euros.
Email : [email protected]
Προηγούμενο : Who will sign James Rodriguez? | Επόμενο : James' silence
Προβολές : 515
- 3875 προηγούμενη ημέρα