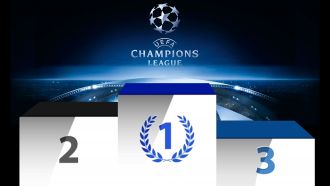 Who's better: Juventus or Real Madrid?

Thursday, 01 June 2017
Few can argue that Juventus and Real Madrid have been the best two teams in the Champions League this season, but who wins on paper before the sides take to the pitch on Saturday night?

Here we cover the key statistics that determine who can be considered favourites for the famous trophy.

No players hit the target more than Cristiano Ronaldo and Gonzalo Higuain with the duo testing goalkeepers 25 and 17 times respectively, the latter matching Karim Benzema. But when it comes to hitting the back of the net, the Portuguese's immense form in the knockout rounds has seen him score double that of his ex-colleague.

Putting balls into the box is fundamental to both sides' attacking play and there's a tie between Dani Alves and Toni Kroos' successful delivery tally, although the Juve man has required only 52 attempts to reach that number - compared to Kroos' 59.

Opponents are obviously fearful of Ronaldo for all his historic prowess but the Real star is behind Paulo Dybala in terms of drawing fouls, with the Argentine striker three ahead of both Ronaldo and Casemiro.

Having gained a notorious reputation as a tough tackling midfielder, it's surprising to see Los Blancos' anchor man commit less fouls than Alves. On 16 and joining Casemiro on the podium here is Juve centre-back Giorgio Chiellini.

Doubting the Madrid attacker's ability to put in the hard miles would be far from the truth as only four players have run harder than Ronaldo in this season's tournament. Among those behind him is Miralem Pjanic, who leads the way for the Old Lady but only racks up 106,774 metres.

In Cardiff, Real Madrid will look to win their 12th European Cup title when they take on Juventus and there's plenty of extra incentive for the players.

Never before has a team managed to defend that title in the current era and it gives Los Blancos the chance to pick up a long overdue double along with their LaLiga crown.

They have gone 59 years without managing to do that but as well as making history being a motivating factor for them on Saturday, there is also a large financial prize on offer.

Captain Sergio Ramos and the rest of the club's senior figures took a big gamble when they made their bonus requests, which the club accepted, but it is now looking like a wise move.

In the event that Real were to win the double this season, it was agreed that each player would be paid 1.5 million euros for their efforts.

Last season, the club paid a total of 32 million euros in bonuses to the playing and coaching staff, largely made up of 700,000 euros per man for winning the Champions League and an additional 100,000 euros for beating Barcelona at the Camp Nou in El Clasico.

This time around, Los Blancos would pay out more than 80 million euros in bonuses if they do come out on top against the Italian champions.

Saturday sees Juventus deploy the strongest defence in this year's Champions League against Real Madrid in Cardiff although one element of their BBC backline, Leonardo Bonucci, could be subject to an approach by Los Blancos this summer.

A couple of fallings out with Bianconeri coach Massimiliano Allegri, over the possibility of a move away from Turin in October before a feud over substitutions in February that bruised both parties' egoes, contribute to a hanging question mark over the centre-back's future.

Los Blancos are certainly admirers of the 30-year-old and opted against any move while Pepe's contract situation was itself unresolved, but with the Portuguese international's destiny set for Inter, a fresh face is required at Estadio Santiago Bernabeu.

Many have touted Jesus Vallejo for that role next season with the Spaniard impressing at Eintracht Frankfurt across 2016/17, although there remain dissenting voices in the Madrid hierarchy who would prefer the 20-year-old to continue to gain experience with a new loan spell.

A decision must be made this summer, then, as Real ponder exactly how much of a priority the position is given Sergio Ramos, Raphael Varane, and Nacho Fernandez's continuation at the club.

With a contract until 2021 and price tag upwards of 40 million euros, Bonucci is a tempting prospect that requires a definite answer once the final whistle blows in Cardiff on Saturday night.

An opening bid of almost 70 million euros has been rejected by Manchester United as Real Madrid make a serious play for David De Gea, it emerged on Wednesday night.

Los Blancos have long been admirers of the Spanish shot-stopper and almost signed him on deadline day of August 2015 before an infamous administration error blocked the move.

Sky Sports have now reported a bid of over 68 million euros being launched by Real in an attempt to turn De Gea's head, although the Red Devils have swiftly knocked the offer back.

As this transfer saga unfolds over the summer, the addition of Alvaro Morata to any deal may be key to swaying United's determination to hold onto the club's multiple player of the year award winner.

MARCA have previously reported that 75m euros would begin to tempt Jose Mourinho's club but a 25m euro bid plus Morata would also be a good offer, especially as Madrid values that sort of deal for the forward over selling him for plain cash to a team such as AC Milan.

Cristiano Ronaldo: I don't like being whistled at, it never happened to me in Manchester

Whistles have been sent Cristiano Ronaldo's way during several Real Madrid home games this season, and the Portuguese forward once again claimed that this is a rather unpleasant situation for him.

Although the demanding Estadio Santiago Bernabeu crowd have repeatedly expressed their unease regarding the Los Blancos superstar's performances, Ronaldo expressed his objection towards such actions, mentioning that nothing like that ever happened to him while playing for Manchester United.

"I have a lot of patience, but I don't like it," he said on La Sexta show 'Jugones'.

"Being criticised in my stadium isn't normal and when I give one hundred percent and things do not come out, they are whistling.

"In Manchester it never happened to me, as the mentality is different.

"I am delighted in Spain but I have Manchester in my memory [as well]."

The four-time Ballon d'Or winner also commented on the upcoming Champions League final against Juventus, stating that his team need to be humble despite being labelled as favourites.

"If you think you are the best, it doesn't mean that you don't possess humility," he said.

"Real Madrid are always favourites, but we have to prove it by trying to be better than them on the pitch."

Mbappe says no to Guardiola with his mind on Real Madrid

Manchester City plan to spend close to 300 million euros in strengthening their squad this summer, but they won't be welcoming Kylian Mbappe to the Etihad given that the French forward has rejected their advances.

The 18-year-old has not yet decided if he'll remain at Monaco for another season, but he is clear that whenever he does move on from the Stade Louis II that he wants to join Real Madrid.

His dream to play at the Estadio Santiago Bernabeu is so strong that he has resisted the first serious interest to come his way, even turning down the chance to work with Pep Guardiola and to join forces with Gabriel Jesus in an exciting front two.

That is partly because of the Zinedine Zidane factor, with the French youngster keen to work with his idol.

"Zidane the player made me dream and still makes me still dream when I watch videos of him," he said on Tuesday while on France duty.

"The coach is completely different, he is a great coach who has quickly achieved results and continues to develop."

Dmitri Rybolovlev, the Monaco owner, is still determined to cash in on his star players - as he has already done by selling Bernardo Silva to City - but the need to sell isn't as great as in previous summers and that makes Mbappe the man in charge of his own future.