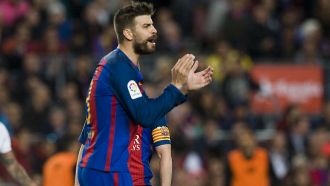 Pique: It would be good if Buffon won the Ballon d'Or

Tuesday, 23 May 2017
Cristiano Ronaldo has strolled ahead as the favourite for the 2017 Ballon d'Or despite it being just May and Barcelona defender Gerard Pique believes the gong should go to Turin, not Madrid.

Ahead of Juventus' Champions League final with Real Madrid, Gianluigi Buffon has been given the centre-back's backing if Lionel Messi were not to claim the honour for his unbeatable goalscoring record.

"Messi this year will win the Golden Shoe as top scorer and deserves the Ballon d'Or again," Pique told Mediaset in Italy. "But if you must look at the trophies then Buffon has won the Scudetto, the Coppa Italia and can win the Champions League.

"He deserves it for his career and also for this season and it would be good for another goalkeeper to win it after after [Lev] Yashin."

In evaluating the Cardiff final, Pique noted that the Bianconeri could follow his side's rule to claim victory over Los Blancos.

"It will be a very close match between two great teams," he continued.

"Juventus are a team that has been doing well for several years and are among the best clubs in Europe with great players like Buffon who really want to win this trophy for the first time, and Dani Alves, who was my teammate and it would be good to see him win.

"But it will be a final that anyone can win. Barcelona have shown how to beat Madrid by taking possession of the ball and trying to stop their counter-attacks."

In fact, Juve coach Massimiliano Allegri received praise from Pique as he spoke to the Italian's countrymen even if he wouldn't verbally label the tactician as his choice to succeed Luis Enrique.

"I do not know who will be our next coach, I have a good memory of Allegri since he won Serie A with Milan and it looks like he's doing well at Juve," said Pique.

"But I do not know who our next coach will be."

Griezmann admits he could move to Manchester United

Manchester United's interest in Antoine Griezmann is no secret, but the Frenchman has openly acknowledged for the first time that there is a chance he could move to Old Trafford this summer.

The Atletico Madrid No. 7 explained that his future will be decided in the next few weeks and did not rule out the possibility that he has already played his final game for the Spanish club.

"I think we will know in the next two weeks," the striker told French show Quotidien before being asked about a move to United. "It is possible.

Griezmann's release clause is set at 100 million euros, but that might not be high enough to put off United, who signed the forward's friend Paul Pogba for a record fee last summer.

Pepe: I am going to wait for Real Madrid until the very end

Real Madrid defender Pepe is facing his contract at the club running out at the end of the season, but is in no rush to decide his future after enjoying the title celebrations for Los Blancos this weekend - and he would be happy to remain at Estadio Santiago Bernabeu.

The Portugal international has been sidelined with a rib problem that has kept him out for several weeks, after clashing with Toni Kroos rather painfully, but was in very good spirits after Zinedine Zidane's men secured the LaLiga title with a 2-0 win against Malaga.

"The [Champions League] final is on June 3, and I have a contract until June 30. As I have always said, I am going to wait for Real Madrid until the very end."

Recently, the Portuguese centre-back has been linked with a move away from the Spanish capital this summer, but it appears that only one team is on his mind for the time being, at least.

Perez: Zidane was the best player in the world and now he's the best coach

After arriving back in Madrid in the early hours of Monday morning, the official celebrations of Real Madrid's LaLiga triumph have begun with Florentino Perez suggesting that Zinedine Zidane is now the best coach in the world.

After enjoying some early morning karaoke at Cibeles, the squad and staff members paid a visit to the Madrid City Council in what is set to be the first official stop on a day of celebrations in the Spanish capital.

As the visit progressed and the tradition of exchanging gifts was complete, the club president made a passionate speech about the club's triumph in which he declared Zidane as the best coach in the world.

"Zizou is one of the symbols of our history, thank you for everything you have given to us, you were the best player in the world and now you are simply the best coach in the world," he explained.

Los Blancos' focus now turns to Cardiff with the Champions League final against Juventus providing the French coach with the opportunity to become the first person to retain the famous European Cup since Arrigo Sacchi.

The importance of this tie is not lost on Perez and he made clear his desire to see the club lift the trophy for the third time in five years.

"This team has demonstrated the values of the club, we dream of returning here on June 4 and I know that this group of coaches and players will give everything to win the double," he continued.

Barcelona's inconsistencies were a problem throughout the campaign but there was still just three points separating them from Los Blancos by the time the season ended and the 70-year-old suggested that the team had emerged victorious from the toughest league in the world.

"We have won the most difficult and competitive league in the world with a lot of effort and humility, these players are already part of the history of this club and there is a great spirit amongst the group," he said.

Whilst much of the afternoon's proceedings were led by Perez there was time for the French coach to say a few words as he pointed out his favourite moment of a successful domestic campaign.

"I enjoyed he last game, it was the decisive match and we played very well," Zidane noted.

A replica league trophy was handed to Manuela Carmena, the current Mayor of Madrid, before the squad prepared for their next stop on Monday's celebratory tour of the city.

It is becomingly glaringly obvious that Zinedine Zidane is embarking on what is likely to be an incredibly successful era at Real Madrid as the Frenchman continues to collect trophies.

He delivered yet again on Sunday as a 2-0 victory over Malaga secured Los Blancos' first LaLiga title since 2012 under Jose Mourinho's stewardship.

Zidane has now enjoyed domestic glory as both a player and a coach at the Estadio Santiago Bernabeu and he could even become the first coach since Arrigo Sacchi to retain the European Cup.

Real face Juventus in the Cardiff showpiece on June 3 and Zidane has his eyes set on a victory against his former club.

Since Mourinho's success both Carlo Ancelotti and Rafa Benitez have failed to win a LaLiga title yet the Frenchman has managed to do it in his first full season in charge.

Sunday's success marked Los Blancos' 33rd Spanish title and it was the fourth title the club has won since the former midfielder took control.

Zidane is gaining a reputation as he has now won every competition he has competed in as the club's coach, aside from the Copa del Rey.

The 2016/17 season will live long in the memory with the LaLiga title being added to success in the European Super Cup and the Club World Cup.

Overcoming the Italian giants would see the team secure a famous quadruple with only the domestic cup missing.

Los Blancos haven't won both LaLiga and the Champions League since 1958 when Luis Carniglia was in charge, yet the 44-year-old can match this achievement and add another trophy to his ever increasing collection.
Email : [email protected]
Προηγούμενο : Zidane: "The players were f*****g fantastic" | Επόμενο : Manchester United offer Griezmann 14 million euros a year
Προβολές : 403
- 3662 προηγούμενη ημέρα