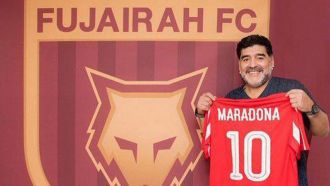 Maradona will coach in the Emirates second division

Monday, 08 May 2017
Former Argentina captain Diego Maradona has ended a five-year absence from football to return as coach of Al-Fujairah FC, the United Arab Emirates club announced on Sunday.

"I want to tell you that I am the new coach of Al-Fujairah SC, in the second division of the United Arab Emirates," Maradona added on his Facebook page.

The club posted a picture of the former Boca Juniors, Napoli and Barcelona striker holding their red and white shirt with his name and No. 10 on the back.

It marks a return to management after a five-year gap for the 56-year-old Argentina great, who as a player led his country to a 1986 World Cup title and runners-up spot four years later.

Maradona, who took charge of Argentina in 2008 and led them to the World Cup two years later, last managed at another UAE club, Al Wasl in May 2011 but was sacked just over a year later.

He was named a FIFA ambassador in February by the world governing body's president Gianni Infantino.

The news of his return to management came on the day that Jorge Cyterszpiler, Maradona's first agent and friend for many years, died in Buenos Aires after a fall, Argentine news media reported.

Morata reveals that Simeone asked him for... some croissants!

Diego Simeone was caught on camera muttering something to Alvaro Morata during the first leg of the Champions League Madrid derby last Tuesday night and the Real Madrid striker has finally revealed what was said.

While some claimed he was urging the striker to move across the city to Atletico Madrid, the coach insisted afterwards that he'd only shared a joke with the player and Morata backed that up on Saturday night.

"Simeone had a joke with me, one which had nothing to do with football," the 24-year-old said after scoring a brace in Granada.

"I know him because he played with [my agent] Juanma Lopez and he asked me for some croissants from the brand I have launched."

The brand in question is Crosantino, a gourmet bakery with a shop in the centre of the Spanish capital.

While the debate centres around Alvaro Morata and his potential role in the BBC dominated Real Madrid attack, three alternatives have hit another goalscoring milestone.

Between them; James Rodriguez, Isco, and Marco Asensio have bagged 30 goals in all competitions.

Saturday saw Isco rested from the starting line-up as Los Blancos took on Granada, such has his promotion been from the LaLiga second string to the Champions League first XI, and he sits on 10 for the campaign.

Ahead of the ex-Malaga man after a brace at Estadio Nuevo Los Carmenes is James Rodriguez, the Colombian boasting 11 strikes for the campaign with eight coming in the league.

Much more of a spread comes in the form of Marco Asensio, the young Spaniard having scored his nine goals across four competitions with three coming in LaLiga and two in the Champions League.

These goalscoring figures may come as a pleasant surprise to Zinedine Zidane but can also serve as a note of caution, as the trio haven't been regular starters this season and may grow frustrated if that doesn't begin to be the case.

The Calderon prepares for the Madrid derby

In Saturday's 1-0 victory over Eibar it was clear that the focus of the Estadio Vicente Calderon crowd was on something else as they prepared for the final Madrid derby to ever be played at the famous stadium.

The 3-0 defeat in the first-leg at the Estadio Santiago Bernabeu has tipped the tie very much in the favour of Los Blancos but with Wednesday's clash likely to be an emotional affair the fans made sure the players knew they would expect 100% effort to try and overcome the deficit.

Eibar's visit was actually the twelfth occasion this term in which Atletico Madrid have declared a match a sell out with LaLiga's own statistics stating the attendance was marked at 46,748.

There have been some phenomenal Madrid derby moments in the 51 years since Los Rojiblancos began playing at their current home and fans remembered many of such moments on Saturday afternoon.

Every quarter of an hour, banners were unveiled which illustrated the names of players, coaches and even club employees who hold a place in the organisation's heart.

Prior to kick-off another mosaic was unveiled which had the words 'I fight and get up' which was designed to work as a message of encouragement to the players not to give up ahead of the return clash with Los Blancos.

Burgos: In the 93rd minute I told Cholo something important but I won't repeat it

In a sincere magazine interview that delved into all aspects of his life, Atletico Madrid assistant coach, German 'Mono' Burgos, siad he'd told Diego Simeone something very important in the 93rd minute of the Champions League final in Lisbon, but he wouldn't elaborate on what that was.

Cholo's right hand man also noted why it is that the pair of them work so well together.

"The two of us are strong characters," he said to Paper magazine.

"But my role is to balance him, free him of doubts and anxieties.

"It's as though I've known him all my life and, together at Atletico Madrid, I'll look up and I know what he is going to say, why he is worried.

"I will always tell him the truth too."

A heavy-set man, the nickname 'Mono' (Monkey) has followed him around for years, and Burgos was quick to clear up exactly how he got the moniker.

"Because of my size my friends called me Griguol [Gorilla], and that eventually became Mono," he continued.

Though he'd prefer not to be reminded of it, he was asked to explain what he was saying to Simeone at the end of the Lisbon final.

"I said something important to Cholo, but I'm not going to repeat it," he said.

"I do not talk much after the games but I need a pessimist by my side to live, because I'm a born optimist.

"I think and take notes....I can't take the emotion, though if I weren't a footballer, I'd like to have been one.

"Cholo has a way of living through each game in which he jumps, kicks ... I have to complement that, the goalkeeper has to be cold."

The leader of Spain's People's Party Javier Maroto has warned the Barcelona board of the dangers of showing their support for an independence referendum in Catalonia.

Prior to the Blaugrana's 4-1 win over Villarreal at the Camp Nou, many canvassed outside the stadium beforehand, collecting signatures from fans who supported the bid for Catalan independence.

In an event in Badalona with Catalan PP politician Xavier Garcia Albiol, Maroto criticised the club's handling of the affair.

"In the name of man other people, I ask myself: is there not thousands of Barcelona supporters who do not feel themselves to be independent?" he said.

"I think that the Barcelona board have scored an own goal and it is clear proof of the pressures that exist in Catalonia."

The Blaugrana have shown their support for Catalan independence and would welcome the holding of a referendum on the subject.
Email : [email protected]
Προηγούμενο : Zidane: Real Madrid have to play a perfect game on Wednesday | Επόμενο : Chiellini: Juventus have more belief than two years ago
Προβολές : 406
- 3561 προηγούμενη ημέρα