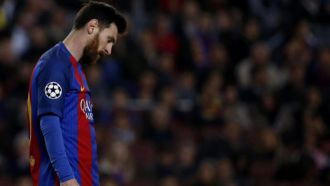 Sunday, 23 April 2017
An indisputable scourge of Real Madrid whilst playing under the orders of Pep Guardiola, Tito Vilanova and Tata Martino, Lionel Messi hasn't found the net against Los Blancos since Luis Enrique took charge of the team.

Barcelona have won five, drawn one and lost two on their last eight visits to the Estadio Santiago Bernabeu, a better streak than when playing at the Estadio de Anoeta, Estadio Mestalla or Estadio La Rosaleda.

During that time, Messi has scored eight goals against Los Blancos in LaLiga, 12 in all competitions.

Yet, the last time the Argentinian could celebrate a goal against Barcelona's fiercest rivals was in the 4-3 win at the Bernabeu in the spring of 2014.

He converted three of the four goals (two of them penalties) and celebrated a difficult triumph in Madrid territory.

After the resignation of Martino, Lucho recovered the spirit of Barcelona, with which he has won eight titles in two and a half seasons.

However, the Asturian coach has not yet been able to celebrate a Messi goal in an El Clasico.

This perceived slump against Madrid has coincided with a particularly prolific era for Los Blancos in terms of titles: two Champions Leagues (one more than Barcelona in the same period), one Copa del Rey, two Club World Cups and two European Super Cups.

If Messi doesn't reverse the negative dynamic this Sunday, he is more likely to see Madrid win their first league title since 2013.

In that case he will have to settle for the Pichichi, a trophy in which he has led the rankings for practically the entire season.

For many, this Sunday's Clasico is Barcelona's last chance to stay in the title race, but Zinedine Zidane believes that the Blaugrana will still have a chance even if they lose at the Estadio Santiago Bernabeu.

Pointing to the fact that Real Madrid will still have half a dozen league outings before the season's end, the Frenchman dismissed the notion that this was a must-win game for the Catalan side, even if he did consider it an important one.

"[Beating Barcelona] wouldn't at all mean that LaLiga is wrapped up," he said at his pre-match press conference on Saturday.

"It's one more match, but then there are six more.

"It is always a special match and is like the derby, but a little different.

"Yet what is up for grabs remains the same, which is three points.

"You never know what will happen in a match, as was the case last Tuesday when we were taken to extra-time after winning the first leg."

Zidane had some good news for Real Madrid fans, revealing that Gareth Bale will be fit enough to feature, although he did also admit that there is some fatigue creeping into his squad.

"Bale will be with us, as he has trained well," he told reporters.

"Tomorrow you'll see if he plays or not.

"There is a lot of tiredness, but there is also plenty of motivation to keep doing what we've been doing."

According to the Frenchman, the home support will be important when the ball gets rolling, even if he did also suggest that the Barcelona players will cope with it.

"We, the coaches, players and fans, are here to give our all," he said.

"We are at home and will aim to do things well with the backing of our fans, who have always helped our team.

"[Yet Barcelona] are not the kind of side that will feel a special pressure at the Bernabeu.

"I don't believe [their Champions League elimination] will weigh on them.

"Barcelona are a good team, who have shown a lot through the season.

"We know we have to play a great game."

Finally, Zidane was also quizzed for his views on Barcelona's appeal to the Court of Arbitration for Sport in order to have Neymar available.

"It's not my specialty, so I don't know if Neymar will play or not," he replied.

The blockbuster match kicks off on Sunday evening at 20:45 CEST, with Real Madrid taking a three-point lead and a game in hand into it.

Luis Enrique: Barcelona are prepared for the Clasico with or without Neymar

No matter the outcome of Barcelona's appeal against Neymar's ban to the Court of Arbitration for Sport, Luis Enrique and his players are ready for Sunday's Clasico.

The three-match suspension dished out to the forward following his recent sending off in Malaga should have ruled him out of Sunday's match, but his club are appealing and there is a chance he could yet feature.

"It doesn't matter what I think," Luis Enrique said in his pre-match press conference when asked if he was optimistic of having the Brazilian available.

"I am prepared to play the match with or without Neymar.

"The club's position of defending itself and its players seems correct to me.

"You'll have to wait until the match to see if we'll take the [legal] risk of fielding Neymar."

For Barcelona, this fixture is hugely important in the LaLiga title race and their coach admitted it is a final as he previewed it.

"It is a match which is special in many ways, for the stage of the season we're in and for the fact we're playing the eternal rival and current leader," he said.

"This is a decisive round as the LaLiga title race could be determined or it could be left wide open.

"There's no doubt that this is a final for us.

"We'll consider the result afterwards to see if the LaLiga race is over or not.

"In any case, we cannot consider it lost until it is mathematically confirmed."

The Asturian also insisted that he was optimistic of securing all three points, pointing to past victories in the stadium.

"We have shown over the years that we can win there," he told reporters.

"It is a factor which stadium the match is played at, but it is also a stimulus for us.

"The objective is to be loyal to our ideas and to dominate the match."

Asked how Wednesday's Champions League heartbreak at the hands of Juventus will affect the players, Luis Enrique was adamant that they'd be sufficiently focused.

"There is enough morale, of that there is no doubt," he said.

"They are professionals of the highest level and are ready to pick themselves up.

"Every time you stumble and lose the chance to win a title it is bad news, but you must pick yourself back up."

Real Madrid take a three point lead into the match, which kicks off at 20:45 CEST, while they also boast a game in hand.

The day Isco left Iniesta in his shadow

As key members of their respective generations of Spanish football, the battle between Andres Iniesta and Isco has always been one to keep an eye on, and the Real Madrid man will be hoping to recreate moments like the one in October 2014 when they meet again this Sunday.

Having gone a goal down in Luis Suarez's debut for Barcelona, Los Merengues rallied and stole a 3-1 win that was sealed by Karim Benzema's late goal.

That strike was made by Isco, who raced out from a defensive corner situation to hound Iniesta's possession of the ball. The Azulgrana star was clearly winning the race and he even had Javier Mascherano for support, but it was the former Malaga man who nipped in to claim the ball.

Such a steal was one of many monumental moments in that clash, with Isco then rolling in Cristiano Ronaldo, James Rodriguez, and finally Benzema to complete a rousing counter.

However it's almost impossible to keep a good man down, with Iniesta burying the third goal of a 4-0 win on his following trip to the Estadio Santiago Bernabeu.

That strike played a big part in Rafa Benitez's Real 2015 tenure becoming doomed, and the defeat was a nightmarish one for Isco also as the Spaniard was dismissed for a hack on Neymar.

It just goes to show, football is a devilish mistress when it comes to one day being the hero, and the next day being the zero.
Email : [email protected]
Προηγούμενο : Five reasons why both Real Madrid and Atletico can win | Επόμενο : Marcelo: I take the blame for the last goal but it can happen to anyone
Προβολές : 452
- 3116 προηγούμενη ημέρα