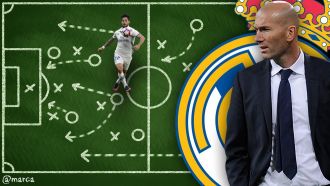 Zidane: Isco is ready to play

Tuesday, 18 April 2017
Real Madrid returned from Gijon last weekend with a vital three points and the excellent performance of Isco was one of the primary reasons for that victory, yet Zinedine Zidane would not confirm if the Andalusian had impressed enough to start against Bayern Munich on Tuesday evening.

With Gareth Bale out with injury, there is a place up for grabs in the starting XI, yet the Frenchman kept his cards close to his chest.

"Just like the others, [Isco] is ready to play and that is important," the coach said at his pre-match press conference.

"Then we'll look at what we decide and at how we're going to play.

Reflecting further on the Welshman's injury, Zidane was hopeful that his knock wasn't anything serious and that he could be back in time for the Clasico.

"[Bale] won't play against Bayern Munich because we don't want to risk it," Zidane explained to reporters.

"He has worked a lot to return to the team following his injury.

"When he returned [following his ankle surgery] he was very motivated, but now he has a minor issue which is preventing him from being well enough to play.

"I'm hopeful he'll be back for Sunday's match against Barcelona, but I can't promise anything."

Finally, the coach spoke about the backing he expects from the Estadio Santiago Bernabeu and how it will be like a 12th man.

"Our home support is going to be important," he insisted.

"We always need them and they are always there.

"With them, we have an extra player."

That second leg against Bayern, for which Los Blancos have a 2-1 advantage, will kick off at 20:45 CEST on Tuesday night.

Where will Isco fit in against Bayern Munich?

Injury to Gareth Bale means that Zinedine Zidane will be forced to tinker with his Real Madrid side against Bayern Munich.

BBC are without one B and it is expected that, following his impressive two goal haul last time out, Isco will be the man to fill in for him.

There are many options available to Zidane but it would appear that the former Malaga man is currently the frontrunner to replace the Welshman.

Ancelotti: Lewandowski is fit and having him gives Bayern confidence

The return of Robert Lewandowski from injury has made Bayern Munich confident of overturning a first leg deficit and eliminating Real Madrid from the Champions League, according to Carlo Ancelotti.

Lewandowski missed the first leg at the Allianz Arena with a shoulder problem and in his absence, the German champions fell to a 2-1 defeat.

However, having him back is a big boost to Bayern's chances, insisted the Italian tactician as he returns to his former club after two years away.

"Lewandowski trained well on Sunday with the rest of the squad," Ancelotti told the assembled media in Madrid. "In terms of the Real side, I don't know who [Zinedine] Zidane will replace [Gareth] Bale.

"Isco did well on Saturday, Lucas [Vazquez] always plays well and so does James [Rodriguez] but I'm only really focused on my players.

"Having Lewandowski back will help us. We won't change our strategy but having him back makes us more confident."

While Ancelotti was happy to explain what he felt went wrong for his side in the first leg, he refused to focus too much on the fact that it may take a massive effort to stop a free-scoring Real side finding the back of the net.

"The small details cost us in the first leg like letting Cristiano [Ronaldo] get free to take a shot at goal and if you leave him a yard of space like that, he will score," Ancelotti added.

"Those are the little things that can cost you and they will be very important again on Tuesday.

"It is true that Madrid score in almost every game because they have great offensive quality and are very dangerous but nothing will be decided until we step on to the field."

Xabi Alonso: Bayern are playing against best team in the world

Although Xabi Alonso admitted that Bayern Munich will find it tough to turn things around against a Real Madrid side he views as the best in the world, he does believe they can come back.

The 35-year-old, who has announced his intention to hang up his boots at the end of the current campaign, is wary of how big a threat his former employers pose.

However, he insisted that confidence and belief has not been diminished in the Bayern camp, despite their 2-1 loss at the Allianz Arena.

"I'm very excited to be back and I had always hoped to return," Alonso told reporters ahead of his final bow at the Estadio Santiago Bernabeu.

"We know that we will have to work very hard because we are going to face the best team in the world and that is a big challenge for us.

"It will be a great game against a great team but we have our aims. It is going to be difficult but we will try our best."

The former Liverpool star is extremely excited about the prospect of his Real return, as running out the Bernabeu once more will invoke happy memories for the midfielder.

"It will be a special feeling for me because I played at this stadium for five years," he added. "I enjoyed it a lot and lived through some great moments.

"I know that it is a magical place but there won't be time for me to think of all of that on Tuesday. We are prepared for the difficult task at hand."

Although elimination at the hands of Real could essentially mean Tuesday night's game is the last 'major' match of his career, Alonso isn't viewing it like that.

"I don't have time to think about tomorrow being my last big match or not," he concluded. "I'm only thinking about winning and making sure I do everything possible to ensure this isn't my final big game."

After Bayern Munich coach Carlo Ancelotti confirmed that Robert Lewandowski is due to return for their Champions League quarter-final second leg against Real Madrid, the striker trained as normal in the Spanish capital.

The Pole's presence on the Estadio Santiago Bernabeu pitch 24 hours before kick-off represents a big boost to Die Roten, who also had Manuel Neuer come into the sessions 10 minutes late.

Having missed the first match, Mats Hummels came through training along with Jerome Boateng as Ancelotti hopes to have his first-choice centre-back pairing available on Tuesday night.

Bale doesn't have a muscle injury

Barcelona face Real Madrid on Sunday, and Gareth Bale is working hard in order to play.

The winger has been suffering with a pain near his soleus and subsequently his ankle, injuries that have plagued the Welsh star during various parts of this season.

They seem to be the reason why he has not performed to his full potential recently.

Different training techniques have been put in place to help solve the issue, along with specific work with his own physiotherapist Jaime Benito.

Zinedine Zidane had to replace Bale early against Bayern Munich in the first leg of the Champions League clash last Wednesday, Marco Asensio taking his place much to the Welshman`s disgust.

However, the Frenchman has a zero tolerance policy when it comes to minor risks which is why he didn't play against Sporting Gijon and why also won't be in the lineup for the second leg against the Bavarians.

Club staff will do their very best in making sure he is 100% fit for the remainder of the season.

A three goal lead cannot allow Juventus to think they have Barcelona beat in the Champions League quarter-finals just yet, according to Paulo Dybala.

Given Paris Saint-Germain's nightmarish 6-1 defeat in the last-16 to relinquish their four-goal advantage, the Old Lady must pay plenty of attention to the Blaugrana's attacking threat in the second leg.

"[Barcelona] are not finished because they're 3-0 down, [it will be] very hard," the striker told Ole.

"What happened with PSG demands that we be attentive."

Kicking off at 20:45 CET at the Camp Nou on Wednesday, Juve can reach their first semi-final in two years with a positive result.
Email : [email protected]
Προηγούμενο : How far would Real Madrid's second string go in LaLiga? | Επόμενο : Cristiano Ronaldo: I just ask that the Bernabeu never jeers me
Προβολές : 375
- 3114 προηγούμενη ημέρα