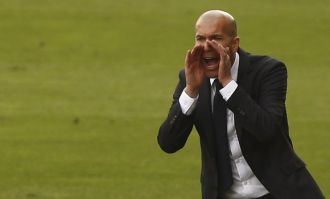 The ex-Malaga man opened the scoring on 17 minutes and wrapped up the three points in a surprisingly challenging encounter at the death.

"He had a great game, and gave us the victory," Zidane began. "He made the difference, I'm really pleased with him."

"Madrid is where he belongs, he showed his character today."

The coach was asked if the situation was unfair on Isco, who routinely finds himself outside of Zidane's preferred XI.

"We have a group of 24 players who would all get their game anywhere else, so there will always be great players left out here," Zidane continued.

"This is the way it is, there are always tough decisions but once again Isco showed what a great player he is today

"It was a disappointment today to concede two goals from two chanced but the result was fair in the end."

Bayern Munich are the next opponents for Los Blancos, with the Champions League quarter-final second leg starting at 20:45 CET on Tuesday night.

Luis Enrique: Barcelona will continue to fight for everything until the end

Whilst far from a convincing performance, Barcelona's 3-2 victory over Real Sociedad is hugely important to Los Cules as it keeps their LaLiga title challenge alive, and coach Luis Enrique made clear his team will fight for all honours for as long as possible.

Goals from Lionel Messi and Paco Alcacer ensured the Catalan giants were not embarrassed on their home pitch by the Basque club.

Tuesday's 3-0 defeat to Juventus has left their continental hopes hanging by a thread but Barcelona's coach remains positive about the team's chances in the remaining weeks of the season as he made clear.

"We will continue to fight for everything until the end, this team is a group of winners and champions and whoever doubts that should stop," he explained to reporters.

Whilst the performance was at best laboured it must be noted how positively Barcelona bounced back in terms of the result following their resounding defeat in Turin. The significance of this was not lost on the Asturian coach as he praised the attitude of his players.

"I am very satisfied; the attitude of my team is impeccable because it is clear that the previous result has weighed on us during the game today," he added.

Barcelona's heroic comeback against Paris Saint-Germain will be remembered for years to come yet it is expected that the Catalan giants will face a much tougher task on Wednesday with the Italian champion so impressive in defence.

Enrique made clear that he hoped the team would be able to use the positive result on Saturday to motivate them in mid-week.

"It is a result that boosts us before playing Juventus, it is a good point to start that game in the knowledge that we are capable of coming back and we will be in the tie for the entire 90 minutes," Luis Enrique noted.

Following the Champions League clash there is almost no rest for Los Cules as they then have to prepare for Sunday's Clasico with the result likely to have huge implications on the LaLiga title race.

With that said, the 46-year-old did not wish to comment on the fixture with their fiercest rivals and made clear that the focus was simply on the Italian champions.

"We face Juventus in the next match and that is all I am thinking about, we need to improve ahead of that game but we are alive in all competitions," he said.

Paco Alcacer managed to get himself on the scoresheet against Real Sociedad and impressed whilst deputising for the absent Neymar on the left-wing. Luis Enrique enthused about the influence of confidence on the forward following a difficult start to life with the club.

"He is the same player he was a few months ago with the only difference being that now he has confidence," said the boss.

The same cannot be said for Andre Gomes who continues to struggle at the Camp Nou with a performance on Saturday that was barely memorable.

"The first year of [Michael] Laudrup in Barcelona was very difficult, he was whistled by the supporters and the same happened with Ronald Koeman but my players need confidence," remembered Luis Enrique.

Isco: I want to stay at Real Madrid but it cannot be a surprise that I want to play more

Cometh the man, cometh the hour, and Isco certainly fulfilled that prophecy on Saturday as he led Real Madrid past Sporting Gijon, and the midfielder believes his desire to play every week is a statement of the obvious.

Whether Isco will feature against Bayern Munich or Barcelona in the coming weeks remains to be seen, although his starting berth at El Molinon was reimbursed with two stunning goals.

"I have always made it clear that I want to be here for many years," the Spaniard stated post-game.

"I don't know why it surprises people that I want to play more.

"I want to stay in Madrid and for many years, both the club and I are going to make the right decision."

However, Isco stopped short of criticising coach Zinedine Zidane for any lack of game time.

"Substitute? Zidane creates the line-ups and is taking the squad in an extraordinary direction," he continued.

"[The win] is a sign that he is doing things very well.

"I know that I am at the best team in the world and I try to do my job with a lot of personality."

Next up for Los Blancos is the quarter-final second leg with Bayern as the Germans take to the Spanish capital for a spot in the Champions League final four.

Pique should concentrate on defending rather than wage war with officials

ust recently, Barcelona's Gerard Pique has spent more time berating the refereeing fraternity than focusing on the job at hand.

Against Real Sociedad, the normally reliable Pique was often at sixes and sevens alongside Samuel Umtiti, and if it wasn't for some profligate finishing, we could've witnessed La Real's first win at the Camp Nou since 1991.

No one watching could argue that it wouldn't have been deserved.

Suggestions that Luis Enrique had told his staff to conserve energy for the week ahead may have contributed to the visitors having possession of the ball for longer periods than most, and thus would also explain why Barcelona's control on the game was limited for long periods.

It certainly ensured that whenever Eusebio Sacristan's side attacked, they looked dangerous for the most part.

A late yellow card from Pique was regrettable but it underscored a haphazard individual performance, and with the coach laying the blame for the Juventus defeat squarely at his door, his motivation for Saturday night's clash is likely to have not been the best either.

Basic errors, the like of which can only be explained by his mind not being on the job at hand.

A corner, admittedly awarded by mistake, had Pique walking around incredulously, head in hands and mouthing incomprehensible sweet nothings at the official, and it wouldn't be a surprise to see another tweet of some description follow in the aftermath.

That would neatly bypass the fact that there were eight defenders in the area - including Pique - when the visitors equalised with their first goal.

The exact same number as on Wednesday, when Paulo Dybala was allowed to turn and open the scoring in the Champions League tie for Juventus.

Pique was in close proximity on that occasion too; it can't just be a coincidence.

When he's on his game, there's still no finer centre-back in world football than the elegant Catalan, and he has always been one of the rocks that recent title-winning Barcelona teams have been built around.

At this juncture, however, he looks a little mentally fragile and seeking to apportion blame elsewhere, and that's a concern when he's about to enter his most important week of the season.

Atletico Madrid eased to a 3-0 victory over Osasuna on Saturday afternoon with a performance which pleased Diego Simeone.

Not only was the coach happy with the result and the collection of three points, but he was also glad that a number of his lesser-used players were able to rack up some playing time.

"I take away a lot of positives from this match, such as the return of [Nicolas] Gaitan, [Jose Maria] Gimenez's performance in a new position, the good performance of Thomas [Partey], the return of Lucas [Hernandez] to the starting line-up and the fact that [Alessio] Cerci got some minutes," he said in his post-match press conference.

"These things helped us in the here and now, while they'll also help going forward.

"I was pleased with the great effort in this potential pitfall of a match."

Los Rojiblancos were so comfortable that they could even afford to miss a couple of late penalties, taking their total misses for the season to eight from 13, something which Simeone can't get his head around.

"I cannot explain that," he said of the poor record from 12 yards.

"It's a difficult individual action."

One of few negatives from the game was Fernando Torres' continued wastefulness in front of goal, but the Argentine wasn't concerned at the fact he has not scored in his past eight LaLiga outings.

"He has always had chances in these matches and when that happens this is a good thing," the coach replied.