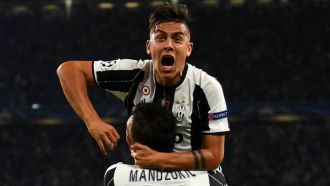 Dybala: I'm very happy at Juventus and my contract renewal is close

Wednesday, 12 April 2017
Two goals from Paulo Dybala helped Juventus on their way to a strong 3-0 first leg win against Barcelona in the Champions League, with the Argentine striking in the first half to make the most of a slow start from the visitors.

Given his two goals, and his excellent performances in general since pulling on the shirt of Juventus, the Argentina international wasn't to be drawn into any gossip.

"I am very happy at Juventus, my contract renewal is very close and I want to make the most of what we are doing here. I am going to try to give the fans plenty to be happy about," he told Mega.

Giorgio Chiellini added a third for the home side after the break from a corner, before the Bianconeri did well to ensure that Lionel Messi and company didn't manage to snatch an all-important away goal.

"We knew that the game was going to be like this, with Barcelona leaving a lot of gaps, attacking a lot and allowing us to exploit the gaps on the counter attack where we were lethal," Dybala said after the game.

"With the goal from Chiellini it allowed us to close out the game and we have a positive result.

"Barcelona had some chances to score, it was very important for us not to concede."

Dybala was keen to put the game behind him, but similarly wasn't phased about heading to the scene of one of the Champions League's greatest ever comebacks.

"Now it will be different, to go there [Camp Nou] with all of their fans behind them, but we will give our best," he added.

"The 6-1? We aren't thinking about that, we're going to enjoy what we've done, and then on Sunday we will think about Barcelona.

"We know them, we are going to give our best to get a good result in Barcelona so we are able to go through.

"We are not going to sit back, we have to go out and pressure them, because we will definitely have chances of our own."

Luis Enrique: Juventus beating felt like the third half of PSG vs. Barcelona

It was something of a case of deja vu for Luis Enrique and Barcelona as they crashed to yet another seemingly disastrous first leg defeat away from home in the Champions League on Tuesday.

The Blaugrana boss was quick to point to his side's four-goal defeat to Paris Saint-Germain in the last-16 after it was somewhat repeated in the 3-0 loss at Juventus.

"It does not matter if I think the result is fair or not, it is what it is," the Asturian remarked to reporters post-match.

"It felt like the third half of PSG vs. Barcelona.

"It is very serious and sad, we were impotent in the first-half, it was a very tough game."

On whether he felt that the defeat in Turin was worse than the previous setback in Paris, Luis Enrique admitted his current state to be more negative than back at Parc des Princes.

"We have revived a nightmare," he added. "We have to determine why we've been so bad.

"This one has cost me more [than the PSG game]."

In determining where Barcelona had gone wrong at Juventus Stadium, the coach insisted that his players must defend better against such prestigious opponents.

"Our positioning and some more details on the pitch were below the level required, and the intensity must be much higher," Luis Enrique lamented. "In the Champions League, against an opponent like Juve, you can not do that."

Barcelona fell to a 3-0 first-leg defeat in their Champions League quarter-final tie against Juventus, with Andres Iniesta unable to help inspire his side to a much-needed away goal in Turin.

Goals from Paulo Dybala and Giorgio Chiellini wrapped up the result for Massimiliano Allegri's men, who will be positive heading to Camp Nou, but the visitors find themselves in a moderately better position than in the latest round that they successfully navigated their way out of.

"The feeling isn't as pessimistic as it was in Paris, but we have a very uphill second leg ahead of us," the Barcelona captain told reporters after the game.

"We have done things badly, above all in the first half. The Champions League punished us with two goals, and in the second half we have seen something else.

"We deserved to score one.

"The corner [mistake] can happen, Juventus are a great team, but when you don't do things well they can penalise you for it.

"If we do what we have done [in the past], we will get back into the tie, but it is impossible."

Alves: Juventus played to near perfection against Barcelona

In his first game against Barcelona since leaving last summer, Dani Alves was left overjoyed by Juventus' display on Tuesday night.

Taking a 3-0 scoreline to Catalonia for the second leg of their quarter-final Champions League tie, the Bianconeri are confident of gaining revenge for defeat at Azulgrana hands in 2015.

"We made a match bordering on perfection," the Brazilian stated post-match.

Now set for a return to Barcelona's home on April 19, Alves will be all too aware of how the Blaugrana will approach the clash.

"You cannot go to the Camp Nou and defend a scoreline because the game is too long," he added.

"It was a very strange feeling playing against Barcelona."

The task is a lesser one on paper for Barcelona than their impressive 6-1 comeback over Paris Saint-Germain, but Juventus' incredible defence will present the Catalans with a mountain to climb on April 19.

Suffering a 3-0 defeat in Turin on Tuesday night, Barcelona failed to grab an away goal just as they did in the last-16 when Les Parisiens earned a four-goal first leg victory.

However, Juve have only let two goals in during this year's Champions League and have claimed positive results at Porto, Sevilla, and Lyon on the road so far.

Nicolas Pareja and Corentin Tolisso are the duo to have bagged past Gianluigi Buffon in Europe, the latter earning a 1-1 draw for the French side.

Therefore Barcelona have just over a week to prepare for a huge onslaught on the visiting team goal at the Camp Nou, off the back of their seventh away defeat of the season and second game in a row without scoring.

Ancelotti: I would prefer it if Real Madrid had left BBC at home

It's fair to say that Carlo Ancelotti is something of an expert on Real Madrid, and the Bayern Munich boss professed as much when giving his verdict on Los Merengues' out-of-sorts frontline.

Whether Karim Benzema, Gareth Bale, and Cristiano Ronaldo are or aren't on their best form going into the quarter-final match-up with the Bundesliga leaders, Ancelotti would still prefer not to see them on the Allianz Arena pitch.

"I've seen a lot of Madrid matches and I think I know a lot about BBC," the Italian told reporters. "I think Madrid are on course to win the league and they do very well with BBC.

"Without them in the team it is not a problem and I think Zidane thinks the same.

"I prefer it if BBC weren't to play, I prefer Cristiano to be on the bench, Benzema in the stand, and Bale watching at home."

A niggling shoulder injury has Munich's star striker Robert Lewandowski under a bit of a cloud going into the game, with the Pole's coach unable to confirm his presence in the starting XI.

"[Lewandowski] only trained for 20 minutes because he has a bad shoulder problem, he's had a good recovery and tomorrow we're going to bring him into the squad," said Ancelotti.

"Today we had to control what he did, but the sensations were good. I do not know if tomorrow will be better or not. Our approach will not change, we can be strong without Lewandowski.

"Both [Lewandowski and Ronaldo] are good guys, they score lots of goals, have a lot of character, and are very professional."

The match represents Ancelotti's first encounter with Madrid since leaving in 2015, although he doesn't think the last-eight tie will be influenced by his previous tenure at the Estadio Santiago Bernabeu, where he was assisted by Zinedine Zidane.

"It's not an advantage to know each other well, and it's not a disadvantage," he continued. "I am not sure what approach Zidane will take, that's why I focus on myself.

"The key is who imposes his approach.

"If I'm to sleep well tonight, I will think this current Real team is worse than my one."

Zidane: Real Madrid's BBC are not afraid of Bayern Munich

Wednesday's Champions League quarter-final first leg is set to be Real Madrid's biggest test in the defence of their European title and Zinedine Zidane wants his BBC frontline to be firing on all cylinders at Allianz Arena.

Expected to start with Karim Benzema, Gareth Bale, and Cristiano Ronaldo, the coach is confident in his star forwards hitting form when they face Bayern Munich.

"They are very good players, with a lot of experience," Zidane noted to the assembled press. "The better they are, the more criticism they get.

"What I can tell you is that I have three players with a lot of personality who do not get scared. I believe that in Spain they are valued, and the people of Spain know a lot about football.

"I hope [Bale] plays like he did three years ago. I see that he's close to his best form and he's endured a long-term injury.

"But he's closer to his best version and this is a very important match for him."

On the other end of the pitch could be Robert Lewandowski, as the Bayern forward battles a shoulder injury, and the Pole is expected to come up against Sergio Ramos despite the defender being one booking away from a suspension.

"I have no doubt that Lewandowski is going to play," added the coach.

"We know Sergio has a card, and he has to be prepared. But we're positive and won't think about it."

Were the centre-back to miss the second leg, a real defensive crisis would hit Madrid, although Zidane is focusing on the positives for now.

"If [Fabio] Coentrao is here with us, of course he can be used," he continued. "We cannot count on Pepe or Raphael Varane for the entire month, that's the way it is and nothing can be done.

"I can say that I am 100 percent and I hope today's training will be perfect.

"I hope that we don't need more centre-backs, we have Nacho and Ramos and peace of mind."
Email : [email protected]
Προηγούμενο : Allegri: Barcelona concede spaces in behind and Juventus must take advantage | Επόμενο : Cristiano Ronaldo: I don't know who was doubting me
Προβολές : 456
- 3026 προηγούμενη ημέρα