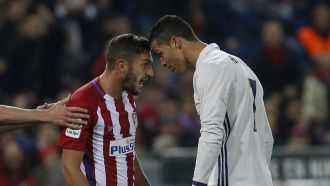 Friday, 07 April 2017
Real Madrid can show how serious their bid to land a first La Liga title in five years really is when they host local rivals Atletico Madrid on Saturday in the midst of the best run of results in the campaign by Diego Simeone's side.

Real ended a three-season drought against their neighbours earlier on in the campaign with a 3-0 win at the Vicente Calderon in November, thanks to a hat-trick from Cristiano Ronaldo, a display Zinedine Zidane's side have struggled to top.

The European champions' destiny is in their own hands as they lead holders Barcelona by two points while also having a game in hand, though doubts linger about their true quality.

Real's play has been littered with lapses of concentration in defence and they have often had to rely on late escape acts to see them through difficult games.

Atletico have won all three of their previous visits to the Santiago Bernabeu in the league and head there after beating Real Sociedad 1-0 on Tuesday to record five consecutive domestic wins for the first time this season.

Zidane made wholesale changes to his team in Wednesday's 4-2 win at Leganes in preparation for the derby, resting Ronaldo, Gareth Bale, Karim Benzema and Toni Kroos.

Marco Asensio and Alvaro Morata shone in the absence of the team's big hitters to help put Real up 3-0 after 25 minutes but familiar frailties were visible at the back as they conceded twice in two minutes before adding a fourth after the break.

Real will find it tougher to compensate for any similar errors against Atletico, who have conceded just one goal in their last six games in all competitions.

Atletico defender Juanfran believes his side are far better prepared to face their neighbours than when they last met.

"It's clear they were better than us in that game but now it's another story, a different moment. I hope we can stay on this great run and get something positive, although we know it'll be difficult because they are top and are having an incredible season," Juanfran told reporters.

"We had a bad run around November and December and that has made us stronger and we've shown once again that Atletico always rises against adversity," added Juanfran, who missed the crucial penalty in the shoot-out when Atletico lost to Real in the 2016 Champions League final.

Barcelona will be waiting to take advantage of any favours Atletico could do for them when they visit Malaga hours after the derby on the back of a 3-0 win over Sevilla.

Coach Luis Enrique said Barcelona's first half performance was "the display we had dreamt about".

The Catalans will be without Ivan Rakitic and Gerard Pique for the visit to Malaga, who picked up only their second win of 2017 by winning 1-0 at Sporting Gijon on Wednesday to move eight points clear of the relegation zone.

James Rodriguez was not happy at being substituted off against Leganes on Wednesday night, although the episode won't alter coach Zinedine Zidane's style of man management.

The French boss is very close to the players, and arguably one of his best attributes is the way in which he manages his squad, keeping every player focused on the team's collective well-being rather than individual goals.

In this sense, Rodriguez's anger at not playing the entire match could be seen as a blow to Zidane, but in fact, the coach has moved on.

Zizou will back the Colombian until the end of the season, when a decision on his future will be reached.

This is the coach's preference for all of his players, and the attacking midfielder is no exception.

James Rodriguez is the 17th or 18th most used footballer within the squad, and all signs point to Zidane continuing to treat him this way.

Zidane was the first to minimise the damage after James' comments on the day Real Madrid won the FIFA Club World Cup in Japan, and he did so again in Wednesday night's post-match press conference.

Chelsea and other European giants are interested in the playmaker, but comments like this may make some think twice before splashing out a large sum.

James Rodriguez: Motherf*****r doesn't even play me the whole match

James Rodriguez hasn't played a full game for Real Madrid since December and his frustrations showed when taken off after 70 minutes of Wednesday's 4-2 win over Leganes.

Cameras caught the Colombian punching the Blancos bench at Estadio Butarque after trudging off, with his words as he exited the pitch also picked up.

"Motherf*****r doesn't even play me the whole match," Rodriguez muttered while walking to the bench, according to Deportes Cuatro

After the game, Zinedine Zidane admitted that James was annoyed but couldn't provide him with solid promises of 90 minute outings in the future.

"I have not spoken with him, it is normal that a player wants to play the full 90 minutes," the coach told a post-match press conference. "These are things that happen and that's it. He played well and I am pleased with that. I don't have anything against James, quite the opposite.

"It is true that he isn't on the pitch as much, but he is offensive and works hard."

If any LaLiga striker is going to claim to be better than Luis Suarez, they best act fast as the Barcelona forward continues to gobble up more goals and assists than all others in the division.

While Lionel Messi is way out in front as Europe's highest scorer for the current campaign, his Azulgrana teammate can boast to having arguably the most strings to his bow as a true No. 9.

The overhead kick against Sevilla on Wednesday constituted Suarez's 24th league goal of the campaign, second only to Messi, with the Argentine later benefitting from assist number 11 by the Uruguayan pitbull.

That put Suarez on 11 key contributions for the league campaign, stepping clear of Toni Kroos, Neymar, and Espanyol's Pablo Piatti.

The Barcelona star has rarely been marked down as a selfless player but his method of bringing others into play while hustling defenders, making darting runs, and sticking the ball away show him to be the complete striker capable of anything - even the treble.

Simeone to Atletico crowd: You're acting like Real Madrid fans

The Estadio Vicente Calderon is capable of producing one of the most intense atmospheres in the whole of Spain, but Diego Simeone felt the crowd needed some extra encouraging on Tuesday evening and urged them not to be as passive as Real Madrid fans.

With Atletico Madrid leading Real Sociedad by just the solitary goal, the Argentine started conducting the fanbase and had some curious motivational messages.

"Come on guys, are you asleep? What's wrong?" television images have shown him saying.

"There's not long left so cheer the team or else you'll be like Real Madrid's fans.

"Get rid of the sandwich and shout, because it's almost finished."

This was not the first time Simeone has worked up a sweat on the sidelines trying to gee up the home support and he has previously spoken of his frustration when the ground is quiet.

"When the atmosphere starts to grow quiet, it annoys me a little because we need this to not happen," he said after a recent match against Real Betis.

"It transmits a relaxed feeling and I don't like to relax."

If Simeone's comments do generate a response then it will be timely, with Champions League rivals Leicester City the next team to visit the soon-to-be-demolished stadium.

Madrid and Atletico will meet on Saturday to play in the 214th Madrid derby, with Zinedine Zidane's side currently sitting 10 points ahead of Diego Simeone's team going into the fixture.

"Between Griezmann and Benzema, I prefer Benzema," Morientes told Sportium in an interview.

"I would not mind seeing Griezmann in the colours of Real Madrid- he is a player with extraordinary potential.

"He is a different player, capable of dribbling and scoring a goal. When [Lionel] Messi and Cristiano [Ronaldo] disappear from the market, one of the most wanted players will be Griezmann."

Questioned for his preference between Koke and Luka Modric, Morientes stated his fondness for the Croatian while stressing the quality of the Atletico midfielder.

"Koke is one of players I like most at Atletico," he continued.

"He is a versatile player who you can play out wide or in the middle.

Morientes also pointed out that both Atletico and Madrid come into the derby in good form.

"Real Madrid have not lost at the Bernabeu yet [this season], while Atletico have been in great form since recovering third position," he followed on.

"The Bernabeu has been key in all games this season and it will most likely be decisive - this kind of game is always special.

"Atletico Madrid are motivated much more in the derby and will want to be the first team to win at the Bernabeu. It will be a special game for the two."

The former Real Zaragoza, Madrid and Valencia forward went on to praise both Simeone and Zidane for their managerial ability.

"They are winning all of their games- some with difficulty, but above all taking all three points.

"Simeone's team is like a chameleon in that they are able to play in multiple ways.

"Zidane has given Madrid calmness. Whenever a new coach comes in, trying to manage a dressing room with so many stars is complicated. He has brought a human element to the team."

Finally, the 40-year-old spoke about Isco Alarcon following rumours that he could be departing the 32-time LaLiga champions.

"He is a player who is capable of making things happen in the final third.

"I would like to reach an agreement to keep him [in Madrid] for many years."
Email : [email protected]
Προηγούμενο : Zidane: I understand why James Rodriguez is annoyed, I have nothing against him | Επόμενο : The best derby in the world
Προβολές : 414
- 3201 προηγούμενη ημέρα