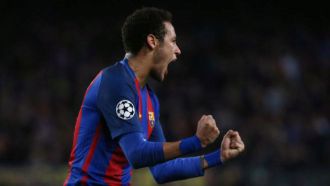 Neymar: I want to win the Ballon d'Or, but I'm in no hurry

Saturday, 01 April 2017
The Ballon d'Or is on Neymar's mind, but his personal ambition isn't his sole reason for playing football.

A sensational 2017 has shown what the Brazilian star is capable of, and he looks bent on showing his talent is as great as his initial promise signalled.

"I want to win the Ballon d'Or, but I'm in no hurry to do so," Neymar told Sport Express. "It is one of my objectives, something I dream of, but personal ambition isn't why I play the game.

"I play because I like to and enjoy helping the team and making fans happy- only once I do that do I hope to achieve personal records."

His relationship with the rest of Barcelona's strike force is one of the reasons behind his success.

"Messi and Suarez are friends off of the pitch," he continued. "On the pitch, we complement each other to perfection.

"They are players I admire."

Finally, the PSG comeback was still on Neymar's mind, as is the possibility of reaching the 2018 World Cup in Russia.

"I've never felt anything like what happened when Sergi Roberto scored the sixth goal against PSG," Neymar said. "Having said that, the Olympic gold in Rio was the most important win in my career.

UEFA and FIFA don't believe Keylor Navas is amongst the world's best goalkeepers, a ranking Iker Casillas took issue with.

Last season, Navas' acrobatics and reflexes played a key role in Los Blancos Undecima Champions League winning campaign, although the Costa Rican didn't feature in the top three of the competition in his position, with the likes of Gianluigi Buffon and Jan Oblak preferred.

"It is incredible that Navas isn't considered amongst the top three keepers in last season's Champions League," Casillas told MARCA in an exclusive interview.

"The whistling is now a part of the Bernabeu and it is curious in Navas' case considering what he did last season.

On July 1, former captain of Real Madrid, Raul Gonzalez Blanco, will return to the club seven years after he left, but he will sign a contract to become presidential adviser in the first week of April.

Although the position is not clearly defined, he will follow in the footsteps of Zinedine Zidane, who started his second period at the club in the same position and is now the leader of the first team.

Raul will shortly be in Madrid to close the agreement with Florentino Perez.

A visible head of LaLiga in North America, an entity with which he had an important contract in economic terms, Raul will resign his position in order to head back to the Spanish capital.

This wasn't Perez's first attempt to persuade his former player either, but on previous occasions the offer was always rejected because the striker did not see the ideal moment for a return.

Now the circumstances have changed and after periods in Germany, Qatar and the United States, he will go home.

His first task will be to advise the president but until the end of the season he will continue as a LaLiga worker and as a beIN Sport commentator.

In fact, he will be at the Estadio Santiago Bernabeu next April 23 for El Clasico.

Ancelotti confirms that Neuer will play against Real Madrid

There was some good news for Real Madrid's Champions League opponents Bayern Munich on Friday after coach Carlo Ancelotti revealed that goalkeeper Manuel Neuer will recover from his foot injury in time to play Los Blancos.

Neuer, captain of the German national team, injured his left foot in training and had to undergo a small operation on Wednesday.

He won't play in Saturday's match against Augsburg and three days later against Hoffenheim.

However, according to Ancelotti's calculations, he could play against Borussia Dortmund within a week and days later against Real.

"Neuer is ready to play against Dortmund and Real Madrid, "Ancelotti told a news conference.

""He has a small Problem with a toe but there is no danger to his participation in the first leg of the quarter-final."

The Bayern medical team intervened to help the goalkeeper recover faster, though he will be replaced by Sven Ulreich for the next couple of games.

Xabi Alonso also misses the Augsburg test because of an accumulation of yellow cards whilst Javi Martinez is out and Douglas Costa has a knee problem.

"We believe he [Costa] will be able to train next week with the team," Ancelotti noted.

"I'm confident that he will be ready for the game against Real too."

Former Real Madrid boss Fabio Capello has experience of managing both in Spain and Serie A across his coaching career, and the Italian has offered an opinion on Barcelona ahead of their Champions League clash with Juventus.

His point of view focused on the form of Luis Enrique's side in recent weeks, and gave further detail into the area of the field that he believes could be something of a weakness for their opponents to exploit.

"I expect a very even 180 minutes and if you were to ask me about the chances of going through, I'd say 50-50," Capello told Corriere dello Sport.

"The problem for Luis Enrique is the centre of the park. He has an incredible attack, but in midfield he doesn't have Xavi - who has never been properly replaced - and Iniesta has suffered injuries.

"On the other hand, Real Madrid have made very good signings and above all picked the time to do it well, while Barcelona haven't reinforced their squad as they may have liked to."

Luis Enrique, however, does have a front three that is potentially the best in world football, which Capello recognises.

"The three are excellent in terms of quality and creativity, but above all they provide the perfect mix of attributes. [Luis] Suarez is the centre forward that Barcelona had been looking for for a while, Neymar has improved a lot and [Lionel] Messi is the same phenomenon as always. This front three is frightening."

Barca's trident, however, comes up against a fearsome defence. Capello believes that it could be a case of an unstoppable force hitting an immovable object.

"It will be a hard test for them, but the defenders at Juventus are champions. They will need to be alert, and above all they need to make sure that they play until the final whistle. They know what happened to PSG."

Conte: The Hazard rumours are meant to destabilise my players

It isn't yet clear what the future has in store for Eden Hazard, but Chelsea coach Antonio Conte didn't seem excessively concerned when asked whether the Belgian will be leaving the club.

Real Madrid's interest has intensified, and Zinedine Zidane has always been fond of the playmaker.

"It is all a part of the game, as the Hazard rumours are meant to destabilise my players," Conte said of the matter. "All I can say is that Eden is doing well and happy to be with us.

"I have a lot experience managing these types of situations, and it is logical and normal that rumours start to come out at this stage of the season.

"It makes me happy because that means we are doing great work."