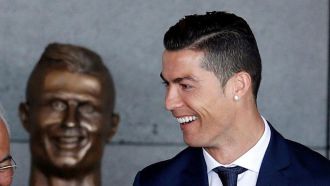 Thursday, 30 March 2017
When the island of Madeira on Wednesday renamed its airport in honour of its hometown hero Cristiano Ronaldo, all eyes were expected to be on the four-time world player of the year who is adored not only for his soccer skills but also his model looks.

But grabbing attention instead was a bronze bust of the player with a toothy grin and bulging eyes that instantly created a laugh on social media because of its debatable likeness.

"I defy you not to feel better after viewing this picture of Cristiano Ronaldo alongside his portrait bust," wrote one Twitter user, Tom Sutcliffe (@tds153).

Another Twitter user deemed the statue "the most gloriously awful bust" of Ronaldo.

The newly revealed statue holds the distinction of being the second bust of the soccer star and occasional model that has been the subject of online ridicule.

Another statue, also in Ronaldo's hometown, was picked apart for what some saw as glaring obscurities and differences in likeness between the player and his bronzed counter-part.

"For a very handsome man, Ronaldo has had some appalling luck with statue-makers," quipped Twitter user Tom Williams(@tomwfootball), posting images of the two statues side by side.

On Tuesday, Portugal played their first match on the island in 16 years, the hosts losing 3-2 to Sweden despite an early Ronaldo goal.

FIFA were unmoved by Lionel Messi's defence of his actions during Argentina's game with Chile last Thursday, as the Barcelona man made the case that he'd simply insulted 'the air'.

In a letter written before the four-game ban was handed down by world football's governing body, Messi stated that his words were not directed at anyone specifically.

"My words were never addressed to the linesman, they were just said in the air," the Barcelona star wrote in his defensive statement, as reported by the Argentine newspaper La Nacion.

Tuesday had already seen Argentina FA vice-president Marcelo Tinelli confirm that Messi had added 'a note' to the report sent to FIFA, although no further details were given at the time.

After the 2-0 defeat in Bolivia that represented the start of Messi's suspension, he is also due to miss World Cup qualifiers against Uruguay, Venezuela, and Peru, subject to an appeal.

Youthful talent is very much on the agenda at Real Madrid with the agent of Palmeiras starlet Alan Souza Guimaraes meeting club president Florentino Perez and CEO Jose Angel Sanchez.

The left-footed midfielder has already represented Brazil at youth level and interest from Inter earlier in the season prompted the Sao Paulo club to slap a 50 million euro buy-out clause in his contract, which runs to 2019.

Juan Figer's meeting with Perez and Sanchez is in keeping with Los Blancos' desire to keep tabs on the best young products across the world, although a deal could not be cut until the 2018/19 season at the earliest as Alan, 17, will not be of legal age to leave Brazil until next March.

Already training with Real Madrid Castilla is another South American starlet, Augusto Galvan, who left Sao Paulo FC and agreed a move to LaLiga in February.

The attacking midfielder will soon be joined by Adrián Mancebo, the 21-year-old left midfielder snapped up by Real from Segunda B outfit San Sebastian de los Reyes, continually proving their desire for the next big thing.

DIS: To wear a Neymar shirt is to support corruption

Delcir Sonda, the founder of the Brazilian company DIS, has suggested that anyone who wears a Neymar shirt is supporting the corruption that his company is accusing the Barcelona player of.

There is an ongoing legal row as the business -which purchased 40 percent of the player's rights in 2009- has alleged that there was foul play in the forward's 2013 transfer to the Camp Nou.

"[To wear a Neymar shirt] is to support corruption," Sonda insisted on Wednesday. "He cannot be an example for our children.

"We are in the middle of huge instance of corruption and we must show our children a [good] example.

Elaborating further on the deal, Sonda spoke of the hurt he felt at being deceived by the family.

"I was betrayed by Neymar, by his father and by his mother," he said.

"There was an instance of fraud, which was orchestrated by Neymar, by his parents and by Barcelona, through simulated contracts.

"Neymar lies and he still lies."

The criminal division of the National High Court recently rejected the appeals presented by Barcelona, Santos, the company N&N, and Neymar's mother after a reopening of the trial had been ordered, meaning that all four parties will have to take to the dock to answer questions in relation to DIS' lawsuit.

"What Barcelona wanted to do was sign a player and to sign him without paying the penalty clause which his contract stipulated, without competing with other clubs who were interested and without worrying about a breach of FIFA rules," DIS' Spanish lawyer Eliseo M. Martinez said.

"They decided to deceive the market and to pay some amounts under the table in order to betray the signed contracts and to defraud the market."

Meanwhile, their Brazilian lawyer Paulo M. Nasser explained that there existed a pre-contract between Neymar and Barcelona in 2011, but that when DIS asked about negotiations a year later, it was rejected by the Catalan club.

At the time, the Blaugrana listed the transaction between themselves and Santos at 57 million euros, but an investigation later revealed that the true figure was in excess of 80m euros.

Zidane, the antidote to the FIFA virus

In little over a year, Zinedine Zidane has radically changed Real Madrid's fortunes, and that switch in mentality is most evident after international duty when fatigue is highest.

After 10 days without the majority of his squad, the French boss has been able to adapt, rotate intelligently and deal with injuries in an impeccable fashion.

In four matches since taking over Real Madrid, he has won all four, including an impressive win over Atletico Madrid in the process.

In fact, two of those wins were against Atletico and Barcelona away from home, with Cristiano Ronaldo scoring a memorable hat-trick against Diego Simeone's side at the Estadio Vicente Calderon.

Last season, his biggest test was to face Barcelona at the Camp Nou and a second half turn-around led to a tightening of the LaLiga race.

The last time Real Madrid lost after international break was precisely against Barcelona under Rafa Benitez, when the Blaugrana stormed the Estadio Santiago Bernabeu with a 4-0 win that was ultimately the start to Rafa Benitez's downfall.

It is only one defeat in their last ten after international duty, so Alaves will certainly have to face a side that already know how to deal with the international bug almost to perfection.

A fit and firing Gareth Bale hopes he can help his side to qualify for the Champions League final in his hometown of Cardiff, as the club prepare for a series of important fixtures in April.

Los Blancos, who are currently top of LaLiga and in contention for the showpiece in Cardiff, will face the likes of Atletico Madrid, Barcelona and Sevilla in the league and Bayern Munich in the Champions League in what will be a season defining month.

Following starring performances in Real Madrid's Decima and Undecima wins, the 27-year-old believes a the club's 12th Champions League crown in Cardiff would go a long way to boosting the profile of football in a rugby-dominated country.

"Nothing would make me more happy than to win the European Cup in my hometown," he said. "And what better way to showcase football than to win the Champions League in Cardiff."

At one stage this season, the prospect of Bale himself appearing in Wales, even if Real Madrid did make the final, seemed unlikely.

Hampered by a serious ankle injury which kept him out of action for a good three months, Bale sought specialist treatment back home knowing full well that it could be his only way of returning to the pitch again this season.

But first, Real Madrid must navigate past Bayern Munich, a team which they humbled back in 2014 when Bale himself played a vital role in their 4-0 demolation.

At the age of 27, the Welshman feels the next few months could be career defining as he attempts to establish himself as the best in the world.