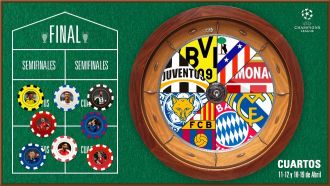 Thursday, 16 March 2017
Barcelona, Real Madrid, Bayern Munich and Atletico Madrid will find out their fate in the Champions League when the quarter-final draw takes place in Nyon on Friday.

All four teams, who also featured at the same stage of this competition last season, will be joined by Borussia Dortmund, AS Monaco, Juventus and Leicester City.

The reigning English champions, who featured one of the most cheaply assembled teams, have been this season's surprise package and have seemingly rediscovered the same form that made them Premier League winners last season since the departure of Claudio Ranieri.

Monaco, too, have taken Europe by storm with their highly entertaining attacking football, and their credentials as challengers have been solidified after dispatching of Pep Guardiola's Manchester City without star front-man Radamel Falcao.

But it seems Borussia Dortmund may be the ones to watch. The Black and Yellows have been at their mesmerising best with Pierre-Emerick Aubameyang leading from the front and could go deep into this competition having previously reached the Champions League showpiece back in 2013.

As such, the quarter-final draw is, in essence, a chance for Europe's up-and-comers to challenge the competitions giants.

Monaco took great pride in staying true to their attacking philosophy after knocking Manchester City out of the Champions League on Wednesday.

The Ligue 1 leaders lost the first leg 5-3 in Manchester, but beat the Premier League side 3-1 at home to advance on away goals thanks to Tiemoue Bakayoko's second-half header.

"We never panicked. Our strength this season is that we are not scared to play. Even when we were 3-2 up in Manchester we continued to play and that's also why we conceded five goals," attacking midfielder Bernardo Silva told reporters.

"We have the best attack in Europe," said coach Leonardo Jardim, referring to the fact that Monaco have scored 126 goals in all competitions this season.

"In the first half, we pressed hard and they did not see the ball. We played more than City, we can even say that in the first leg they were lucky."

Monaco started the game on the front foot and the 18-year-old Kylian Mbappe put them ahead with a tap-in before Fabinho, 23, doubled the tally just before the half hour.

Leroy Sane pulled one back for the visitors in the 71st minute but Bakayoko, 22, headed home the goal that sent Jardim's young side through.

"When you look at the number of goals, it's 6-6 but we managed to score many away goals and be solid at home so I would say we deserve to go through," said Bakayoko.

"If we're here, it has nothing to do with luck, we made a lot of efforts. There is a lot of pride tonight. We deserve this."

After becoming the first team to go through in the Champions League after conceding five goals in the first leg, Monaco await Friday's draw in confident mood.

"When we look at the quarter-finals line-up, we have nothing to be afraid of," Bakayoko said.

Hired to turn Manchester City into true European heavyweights, Pep Guardiola failed just like those before him as his expensively-assembled side crashed out of the Champions League to Monaco on Wednesday.

A 3-1 defeat in the Riviera principality rendered City's 5-3 home win academic as Monaco went through on away goals after an astonishing last 16 tie ended 6-6 on aggregate.

It ended Guardiola's proud record of reaching at least the semi-finals for the past seven seasons with Barcelona and then Bayern Munich, while City became the first club to exit the competition having scored five goals in the first leg.

Hardly the way Guardiola, twice a winner as manager of a world-beating Barcelona side, wanted to celebrate taking charge of his 100th match in European competition.

While City's owner Sheikh Mansour will give Guardiola time and plenty of money to get things right next season, the reality is the Spaniard's first year at the helm will be classed as a major disappointment unless City go on to win the FA Cup.

Last season City reached the semi-finals of the Champions League for the first time under Manuel Pellegrini -- the Chilean who never quite won over all the City fans despite winning the Premier League and League Cup in his first season in charge.

Yet when it came to the crunch on Wednesday, City showed they have regressed. While a year ago it was Real Madrid who beat them 1-0 on aggregate this time it was a side that despite their flair do not yet occupy a place at Europe's top table.

What made it all the more galling was the naivety of City's first-half play when they surrendered the initiative to Leonardo Jardim's side that was missing injured talisman Radamel Falcao.

Guardiola said beforehand that attack was the best way to defend their 5-3 advantage, but they did precious little of it in the first half. And not much defending either as Kylian Mbappe and Fabinho scored inside the first half an hour.

"We forgot to be there in the first 45 minutes," Guardiola, who could not hide his frustration on the touchline, said. "The second half was much, much better but was not enough."

City did indeed improve after the break, playing with a purpose that was lacking earlier.

But just when it looked as though Leroy Sane's 71st minute goal had opened the door to the quarter-finals, City switched off and were undone by a classic set-piece goal as Tiemoue Bakayoko headed powerfully home.

"We will improve but this competition is so demanding," Guardiola, who spoke of his team's lack of experience in dealing with such situations, said. "Sometimes we have to be special and be lucky. Tonight we were not."

Guardiola remains special -- 21 trophies in seven years is proof of that -- but for now he is playing second fiddle to Chelsea boss Antonio Conte in the Premier League and, incredibly, Leicester City's rookie boss Craig Shakespeare in the European tournament he most cherishes.

For a fourth consecutive season, Barcelona, Atletico Madrid and Real Madrid have progressed to the quarter-finals of the Champions League and there is a chance that either of the trio could be pitted against one another come the draw in Nyon on Friday.

In addition, Bayern Munich, AS Monaco, Juventus, Borussia Dortmund and Leicester City will also feature in the last-eight of the competition.

In the last three editions of the tournament, there has been a Spanish showdown in the quarter-finals. Despite that, the odds of it taking place again are just 42.86%, leaving a 57.14% chance that there will not be an all-Spanish showdown.

In fact, excluding this season, there have been three or more representatives from the same nation in 17 editions, eight of which have seen nation pitted against nation.

The most likely outcome on Friday is that there will be a Spain-Germany clash (68.57%). Meanwhile, the chances of Juventus, Monaco and Leicester City drawing a Spanish opponent rests at 42.86%.

That there will be a Spain-Germany double-header only has a 17.14% chance of happening.

Probability of a Spanish confrontation: 42.86%

Probability that there will be no Spanish confrontation: 57.14%

Probability of a Spanish team playing an Italian team: 42.86%

Probability of a Spanish team playing a French team: 42.86%

Probability of a Spanish team playing an English team: 42.86%

Probability of a single Spanish tie against German: 51.43%

Probability of at least one Spanish-German tie: 68.57%

Simeone: Atletico can't influence the draw, so what will be will be

Atletico Madrid are in the Champions League quarter-finals for the fourth straight year, but Diego Simeone was quick to point out that there is still plenty of work for his team left to do in the competition, even if he wouldn't say which opponent he'd prefer to face in the next round.

The Argentine insisted that his focus is back on LaLiga and that he is not stressing about the outcome of Friday's draw.

"We are thinking only about [the weekend's match against] Sevilla," he said in his post-match press conference.

"Atletico don't have any influence [on the draw] so what will be will be.

"This is an important step, but it is only one step.

"The Champions League is always special and this is important for the club.

"I want to acknowledge the great effort from the club and especially from the players, who have given their heart and soul and who have competed in all kinds of situations during these four years."

Speaking about the goalless draw which confirmed Los Rojiblancos' will progress to the quarter-finals, the coach insisted that it played out as he had hoped.

"We played the match as I demanded and the team was always concentrating," he told reporters.

"It wasn't easy, even if it appeared simple.

"I may not be showing it on the outside, but I am happy inside."

In particular, he was thrilled that so many young players were able to step in and finish the job, with veterans like Gabi and Filipe Luis both suspended.

"We have to consider how many young players were taking part today, such as Thomas [Partey], Saul [Niguez], Sime [Vrsaljko], Koke, Lucas [Hernandez] and [Yannick] Carrasco," he said.

"They were men on the pitch.

"Four years ago we saw Thomas and Saul playing in the Segunda B.

"I told Thomas that to be playing first tier football now is really great considering where he was four years ago."

There was also special praise for Jan Oblak, who conjured up an incredible triple-save to prevent a nervy finish.

"What Oblak did was fantastic," the Argentine said of his goalkeeper, before praising Bayer Leverkusen's Bernd Leno too.

"It was almost similar to the two saves from their goalkeeper in the first half from [Angel] Correa and Koke."