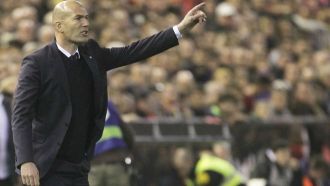 Tuesday, 28 February 2017
The short space of time around Manu Trigueros scoring for Villarreal and Karim Benzema failing to register for Real Madrid had summed up the visitor's performance in Castellon on Sunday night.

The French striker stared down the barrel of Andres Fernandez's goal, just as his opposite number was to take on Keylor Navas, and both executed a strong effort on goal.

One shot dropped nicely into the keeper's hands, the other hit the back of the net.

It was these types of scenarios that were played out on a number of occasions for the first hour of the match, which culminated in Cedric Bakambu putting the hosts 2-0 up.

Of course, after that goal, Madrid put in a stellar performance, but it left behind a long shadow.

The comeback arrived perfectly on time at Estadio de la Ceramica, as opposed to against Valencia days before, and was aided by the controversial handball used to penalise Bruno Soriano in his own penalty area.

Zinedine Zidane has several problems; the starting XI is being based less and less on the form of his players, the team is showing mental fragility at key moments, and the defence are conceding far too many goals against top opponents.

The impetus is not being delivered by the Real coach, as demonstrated in both trips to the east coast this past week, and while there was no time for a comeback at Estadio Mestalla, Zidane saw the light before it was too late against Villarreal, and replaced Casemiro and Benzema with Alvaro Morata and Isco.

It was these two substitutes that altered the team's momentum, and the game.

The mental aspect should be more of a concern for the Blancos boss, even though it is not fundamental. But, Sevilla scored two in five minutes, so did Valencia, and Villarreal as well. Is this a case of the team switching off, or a more telling weakness?

As for Isco, his lack of presence for a game and a half last week was all the more apparent when he finally entered the field of play for Casemiro at la Ceramica. Curiously, it was the Brazilian replaced rather than Benzema, proving that Zidane continues to believe in his countryman in the face of all the evidence.

And yet, this time, Zidane reacted in time. That does not take away from the fact that too many goals are going in the Real net, but the league title is still very much in their hands.

Only Messi has better record than Morata

Alvaro Morata has officially become Real Madrid's lifeline this season and his scoring prowess stacks up with the best of them.

He proved that again on Sunday night when he came off the bench to head in a crucial winning goal in a 3-2 comeback win over Villarreal.

Statistically, he is LaLiga's most formidable striker after Lionel Messi and now has seven goals in his last eight league games.

The only player who has a better record is the Argentine, with eight goals in as many matches.

In addition, Messi is the only player in the league with a better average goal record per minutes played. The Barcelona forward averages a goal every 86 minutes, which is the only record better than Morata's, with the former Juventus man scoring every 92 minutes.

Also equalling his scoring record with Juventus last season in half the playing time, the Spaniard has notched 12 goals in just 1,200 minutes, compared to the 2,300 minutes it took last year.

Villarreal and Real Madrid respect each other, though they can hardly be considered as friends, and after the intervention of referee Gil Manzano during the game between the two teams on Sunday, it has reopened the old wounds of the Yellow Submarine's president, Fernando Roig, towards Los Blancos.

In many respects, the two entities maintain antagonistic positions and their presidents are polar opposites in their sporting ideology.

After what happened in the Estadio de la Ceramica, the official was whistled at the end of the match and Roig already spoke to Movistar suggesting favouritism towards Villarreal's visitors.

That was the complete opposite to Emilio Butragueno, who didn't mention the referee influencing the result in favour of his team.

However, Roig had hit a nerve and the indignation from Real Madrid at his comments was total and absolute.

What did he mean? What was he implying?

Real are furious and do not understand or share the veiled insinuation Roig put on the table, knowing that the reaction that was going to occur immediately.

Would he have said the same if Villarreal had won the match?

The two teams cordially closed the transfer of Denis Cheryshev last summer at the request of the player.

Six months earlier, Real refused the switch because at that time they considered Villarreal a rival team.

Sunday's issues will mark a before and after in the relations between the two clubs.

Real don't intend to change its way of acting with respect to the referees, at least publicly, but what it is not going to admit are innuendos like the ones made by Roig.

Villarreal have also handed over gift bags to match officials

The furore surrounding Sunday night's match officials leaving the Estadio de la Ceramica with Real Madrid branded bags appears to be something of nothing after images showed that referees have previously left Villarreal with gift bags.

Yellow Submarine president Fernando Roig was particularly incensed by the incident but La Sexta's images from the 2011/12 clash between the same two sides (1:10 in the above video) suggest that both have indulged in handing over gift bags post-match.

"The referee and his assistants have left the stadium with bags from Madrid ... and that's not right," Roig had commented after the Sunday's game.

Leicester City returned to form in stunning fashion on Monday as Jamie Vardy scored twice in a 3-1 Premier League defeat of Liverpool that lifted the champions out of the relegation zone.

In their first match since manager Claudio Ranieri was sacked after five successive defeats in which they failed to score a goal, Leicester produced the kind of vibrant display that carried them to glory last May.

Liverpool were simply overwhelmed as their hopes of a top-four finish suffered a severe setback.

Vardy gave Leicester the lead in the 28th minute with his first league goal since December.

Danny Drinkwater made it 2-0 with a stunning volley six minutes before halftime and Vardy headed rejuvenated Leicester's third on the hour as Liverpool crumbled.

Liverpool enjoyed plenty of possession and Philippe Coutinho gave them a lifeline after 69 minutes but Leicester held on for a crucial victory which took them up three places to 15th.

"It feels good, we need to enjoy it while it lasts and build on this," Drinkwater said. "You could call it a reaction, we have come under a bit of stick."

Vardy said he could not put his finger on why Leicester had suddenly produced a performance worthy of champions after a pitiful defence of their title.

"We've been working hard on everything we've been asked to do but it's not been happening. Tonight it all clicked."

Leicester's players looked fired-up from the first whistle and Vardy caught Sadio Mane with an ugly tackle inside a minute.

Liverpool, well-rested after a two-week break and some warm weather training in Spain, lacked any rhythm and keeper Simon Mignolet was called into action to stop a Robert Huth header.

Leicester's caretaker manager Craig Shakespeare made only one change from the side that took to the field for Ranieri's final game -- last week's 2-1 loss in Sevilla in a Champions League last-16 first leg -- bringing in Shinji Okazaki for Ahmed Musa.

Okazaki's flying header forced Mignolet into another save before Vardy scuffed a volley at the Liverpool keeper having produced a wonderful piece of skill to control a high ball.

The England striker, playing higher up the pitch on Shakespeare's instructions, made no mistake in the 28th minute though, racing on to Marc Albrighton's perfectly-weighted pass before drilling a powerful shot past Mignolet.

It was Leicester's first goal for 638 minutes, and 11 minutes later they had another. James Milner's clearance bounced towards Drinkwater 25 metres out and the midfielder steadied himself before launching a rocket that flashed into the net.

The expected Liverpool response never materialised after the break and Leicester went further ahead on the hour when Vardy timed his jump perfectly to head in Christian Fuchs's cross.

Leicester's fans roared "3-0 to the champions" while also chanting the name of Ranieri and it was easy to imagine they had been transported back to last season when their team took the title by 10 points.

Coutinho scored in the 69th minute with a cool side-foot finish and the visitors suddenly came to life, although it was too little too late for Juergen Klopp's side who have won only once in seven league games.