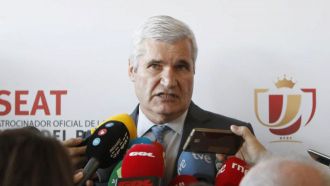 Saturday, 14 January 2017
Following his comments made that Lionel Messi is not as good without some of his teammates, Barcelona have taken the action to sack Pere Gratacos from his post within the club.

A statement from the club explaining the dismissal reveals that the decision was made because Gratacos made a personal opinion that does that coincide with the club's line.

The same statement said that the decision was made by the Barcelona's Director of Professional Sports, Albert Soler, who from this moment assumes the position of Institutional Relations manager that Gratacos filled until now.

However, Barcelona say that Gratacos will continue working in the club within the framework of the project Masia 360.

Gratacos once managed the Barcelona B team during a period spanning from 2003-2005, and as a player he failed to progress from the Barcelona B ranks into the first team, having fleeting spells with Osasuna and Figueres.

In an official statement, Sevilla have asked LaLiga to reprimand Real Madrid centre-back Sergio Ramos for his antics and gestures towards the Pizjuan faithful after scoring a Panenka penalty in their Copa del Rey second leg.

According to Los Nervionenses, the gestures were meant to incite the crowd, which isn't allowed by the league's disciplinary committee.

The official statement reads as follows:

Sevilla would like to make a formal request to LaLiga to ask the league body to denounce to the RFEF Competition Committee and the Anti-Violence Committee for the gestures made by Mr. Sergio Ramos in celebration after a goal in yesterday's match in what could be considered infractions of RFEF disciplinary rules.

Sevilla also strongly condemned the chants made by a section of the crowd, reaffirming its commitment towards ending racism, violence, intolerance in the stands.

Real Madrid have closed ranks around their captain Sergio Ramos in the wake of the abuse he received against Sevilla in the Copa del Rey on Thursday night.

The former Sevilla man scored a vital penalty which sparked the comeback trail for Los Blancos in a 3-3 draw but found himself vilified at the Estadio Ramon Sanchez Pizjuan by a public who once adored him.

Los Blancos are keen to offer their support for the captain in the wake of the incident, starting from the top with club president Florentino Perez getting in touch with Ramos after the game to express his affection and assistance with the defender during a difficult personal time for him.

Ramos' teammates all followed the president's lead and any player who stopped to speak to the media in the mixed zone at the Ramon Sanchez Pizjuan all voicing their support for Ramos, particularly Kiko Casilla, Nacho Fernandez and Marco Asensio.

Less than 24 hours later, the club's director of institutional relations Emilio Butragueno expressed the club's position regarding their captain.

"It isn't right that there are such insults inside the stadium," said Butragueno. "Football is a wonderful sport that has the capacity to unite people and that's the message that we want to convey."

It is understood that the Spain international was hurt greatly by the insults and jeers that came his way on Thursday night, given the relationship he once had with the Sevilla supporters.

Bale: My ankle is getting better every day

Real Madrid winger Gareth Bale continues his recovery from the injury to the perineal tendons in his left foot that have sidelined him since the end of November.

During a Champions League tie against Sporting CP, the Wales international suffered the injury and has since underwent successful surgery on his ankle.

However, he has been boosted by both his successful rehabilitation and the performance of his teammates in his absence, as evidenced by a social media post from the winger.

"My ankle is feeling better every day and is helped by the boys breaking the Spanish record," wrote Bale. "#40, #Unbeaten."

Bale no longer needs the protective cast around his foot following last year's surgery and works out every day at Valdebebas.

Real Madrid winger Gareth Bale continues his recovery from the injury to the perineal tendons in his left foot that have sidelined him since the end of November.

During a Champions League tie against Sporting CP, the Wales international suffered the injury and has since underwent successful surgery on his ankle.

However, he has been boosted by both his successful rehabilitation and the performance of his teammates in his absence, as evidenced by a social media post from the winger.

"My ankle is feeling better every day and is helped by the boys breaking the Spanish record," wrote Bale. "#40, #Unbeaten."

Bale no longer needs the protective cast around his foot following last year's surgery and works out every day at Valdebebas.

The draw for the Copa del Rey quarter-finals was made on Friday lunchtime, with Barcelona being paired with Real Sociedad, Real Madrid getting Celta Vigo and Atletico Madrid drawing Eibar, while second division side Alcorcon are set to face newly-promoted Alaves.

Luis Enrique's side will face a tricky trip to Anoeta, where they have not won since 2007, although the Blaugrana do have the positive of having the second leg at home.

They needed to pull off a comeback in the last round after a disappointing first leg in the Basque Country and could have to do likewise.

For the two big Madrid teams, they both have home first legs, before respective trips to the north of Spain, while capital city minnows Alcorcon will take on Alaves in their first ever cup quarter-final.

The first legs of each tie will be played on January 18 and 19, with the return matches taking place one week later, also on the Wednesday and Thursday.

Costa and Conte in furious row that could signal striker's exit

Chelsea forward Diego Costa and coach Antonio Conte have reportedly been involved in a massive row in relation to the player's fitness.

Complaining of a back problem to the club's medical staff, Costa has claimed that he isn't fit at present, although Chelsea doctors have cast doubt upon his claims and Conte has taken their side.

According to the Daily Mail, a furious argument between the pair took place in relation to Costa's apparent injury concerns and the player hasn't travelled with the squad for Saturday's Premier League fixture away to Leicester City.

The report further claims that Costa's agents are currently in China and could even work on securing him an Asian move in January away from Stamford Bridge.

A dizzying offer of up to 30 million euros per season could come the former Atletico Madrid striker's way and the next two to three days will be crucial in determining where his future lies.

Manchester United manager Jose Mourinho has called on their fans to give his in-form team something extra when bitter rivals Liverpool visit Old Trafford in the Premier League on Sunday.

Mourinho ticked off United's supporters for being too quiet during their League Cup semi-final first leg win over Hull City in midweek, but was quick to deny any lingering discord between himself and the supporters.

He did, however, cite the passion of the Liverpool fans in the reverse fixture at Anfield in October as providing a benchmark that the Old Trafford supporters must match.

"It's for them that the match means something more," the Portuguese told a news conference on Friday.

"They have to make us feel that feeling we felt at Anfield -- we felt clearly for the Liverpool fans it was more than a match.

"We play at home, so it's a huge percentage of our fans compared with Liverpool fans, so they can give us that little bit extra to make the game a bit more special for us."

United secured a 0-0 draw at Anfield with a disciplined defensive display, but Mourinho said his team, who are currently on a nine-game winning streak, were now reaping the benefits of spending more time together.

"At that time, I had less time to work together with my players, now I have a little bit more and we know each other better," he said.

When the question was put to Mourinho, however, the Manchester United boss said he was the calmer of the two managers.

"I just think we like to win," Mourinho added. "Probably we have some similarities and other characteristics that make us different. He wants to play the game as much as I want, I am not sure if he is so calm as I am."

Sixth-placed United can cut the gap on second-placed Liverpool to two points with victory, and Mourinho said his team were focused on the task ahead.

"No one is nervous. Everybody wants the game. I am sure Juergen is the same," he said.

"It's three points, plus the emotional side of it... It's a good rivalry. I always feel it is very good for the football clubs."

Striker Zlatan Ibrahimovic and defender Marcos Rojo are likely to be fit for the match, with Mourinho also confirming the club had rejected a bid for midfielder Memphis Depay.

Email : [email protected]
Προηγούμενο : The unbeaten streak that never ends | Επόμενο : Zidane: Ramos is an example for us all and the most emblematic Spanish player
Προβολές : 351
- 2697 προηγούμενη ημέρα