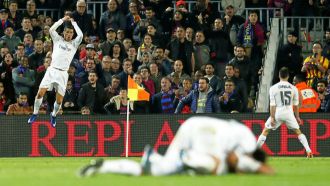 Saturday, 03 December 2016
Arriving at the Camp Nou as the leader of LaLiga by six points, Real Madrid are convinced that they can deliver a fatal blow to Barcelona's own hopes of retaining their crown this season.

Los Blancos have a comfortable advantage, team spirit is harmonious and Zinedine Zidane has even had the luxury of being able to play some of his reserve players in the Copa Del Rey in order to allow his best players to rest before their biggest game of the season.

The staff have already analysed El Clasico and just how definitive it could be if they approach the game with the right mindset and carry out Zidane's instructions to the letter.

Although they are aware that Gerard Pique is not at his best because of his ankle problem, Real understand that Neymar is able to cause problems and Lionel Messi can still win games on his own.

Atletico Madrid were in the same bracket until the demonstration of strength and power in the Estadio Vicente Calderon served to put distance between Real and the Rojiblancos.

Playing with such conviction, Los Blancos know that they have a real opportunity to take a giant step towards their 33rd LaLiga title if they were to win on Saturday, whilst at the same time they won't start the game with excessive optimism.

Make no mistake. Real Madrid want the league title, a stated aim at the beginning of the season.

"If we win, Barcelona will have more doubts," Zidane has said previously.

Last season, everything was lost when they played El Clasico in Barcelona, yet with the victory they were able to dislodge the crown from the head of the Catalans and came within a whisker of winning the league.

This time, they are convinced that they can take advantage.

The numbers and stats don't lie ever since Zinedine Zidane took over as Real Madrid coach, but El Clasico is a different beast entirely, though it does present a opportunity for Los Blancos to sit nine points ahead at the top of the table if all goes to plan.

Florentino Perez took a risk upon Zizou's appointment, and after 11 months in charge, the gamble has paid off tremendously, with the French boss establishing himself as one of the best coaches in world football.

His relative inexperience has hardly ever come up, and instead he has gone 32 straight league matches in an 8 month span without a loss.

His first Clasico was a chance to prove himself, with the team showing great character to come back for a 2-1 away victory at the Camp Nou.

Since then, Zidane has been nominated for coach of the year alongside Claudio Ranieri and Fernando Santos, seasoned veterans compared to the Frenchman.

Calm and a man of few words, Zidane's side will look to play Saturday's Clasico with the same intensity as the last time they faced off, and the Galactico boss will also look to cement his role amongst the world's best coaches with another vintage performance.

A successful debut season in charge of Real Madrid has resulted in Zinedine Zidane being shortlisted for FIFA's 'The Best' coach award.

The Frenchman took over midway through the campaign from the struggling Rafa Benitez and went on to lead Los Blancos to Champions League success in his first year in charge.

Those achievements haven't gone unnoticed by FIFA who have named Zidane among their candidates for the honour, along with Claudio Ranieri and Fernando Santos.

Meanwhile, Santos was involved in another unlikely success as he helped an unfancied Portugal side to Euro 2016 glory in France during the summer.

Despite leading his side to another Champions League final, Atletico Madrid boss Diego Simeone missed out on the podium.

The award will be presented at a ceremony on January 9 in Zurich.

Maradona Jr: Cristiano Ronaldo will be more key than Messi

Diego Maradona's son, Diego JR, had some interesting comments on Saturday's El Clasico, if his father's former allegiances to Barcelona are to be kept in mind.

Sharing his father's passion for the game, Maradona JR is an accomplished beach football player, and insists Cristiano Ronaldo is likely to play a larger role on Saturday than Lionel Messi.

"Cristiano Ronaldo will be more key than Messi," he said. "It's difficult to choose, but right now I think Real Madrid are stronger.

"They reach the match are a bit calmer and haven't lost in a while."

As to choosing Ronaldo over Messi's chances in the key match-up, Maradona JR admitted that it was a difficult choice to make due to his shared Argentine nationality.

"Of course as an Argentine it is difficult for me to say that," he clarified. "I only mean at the current moment - right now."

"Messi will always be the greatest after my father, but in a match as important as this one what normally happens is the star who is on the team in better form plays better and is more decisive."

Griezmann the eighth challenger to Messi and Ronaldo's podium

The three finalists have been announced for FIFA's 'The Best' award and Antoine Griezmann was the chosen one to join the ever-present Lionel Messi and Cristiano Ronaldo.

With this inclusion, the Frenchman becomes just the eighth player to join the Argentine and the Portuguese on the shortlist as a candidate for the best player in the world since 2007, the year the duo first burst onto the awards scene.

Kaka pipped them to top spot in that year's FIFA World Player of the Year and Ballon d'Or voting, but one of the two has claimed the most votes every year since.

Ronaldo took both honours from the Brazilian in 2008, ahead of Messi and Fernando Torres, before the Barcelona forward's 2009 performances propelled him to the top of the footballing world, with his Real Madrid rival and his club teammate Xavi Hernandez rounding off the top three.

The FIFA World Player of the Year award then merged with the Ballon d'Or to create the FIFA Ballon d'Or, which has been shared between the two giants of the game ever since, with the only other players to join them in the top three being Neymar, Manuel Neuer, Franck Ribery, and Andres Iniesta - with the latter two each making two appearances.

With Friday's announcement, Griezmann is the latest star to challenge Messi and Ronaldo, which is a dream come true for the Atletico Madrid forward, who told The Guardian earlier in the year that his goal was to 'eat at the same table as Ronaldo and Messi'.

The nomination is also a proud moment for Atletico as a club, with Griezmann becoming just the second Rojiblanco to be listed in the world's top three, following in the footsteps of Paulo Futre, who earned second place in the 1987 Ballon d'Or behind Ruud Gullit and ahead of Emilio Butragueno.

FIFA World Player Of The Year 2007