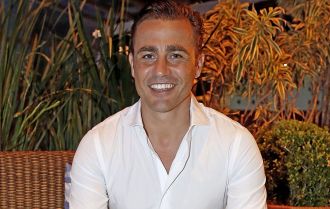 Now coaching in China, ex-Real Madrid centre-back Fabio Cannavaro believes Cristiano Ronaldo to be most worthy of winning the 2016 Ballon d'Or to be awarded in little over a month's time.

Achieving promotion with Tianjin Quanjian in the Chinese Superleague, Cannavaro is applying everything he learned as a player at the beginning of his career on the touchline, and his time spent with Los Blancos has certainly played a formative role.

"Cristiano Ronaldo deserves to win the Ballon d'Or, without a doubt," Cannavaro said. "Even if he hasn't scored these last few games, we shouldn't forget all he's done this year.

"Carlo Ancelotti used to say that with Cristiano [Ronaldo], it is like starting a match with a 1-0 edge."

The Italian also was impressed with Zinedine Zidane's work to turn around the club after Rafa Benitez.

"Zidane has managed things very intelligently," he said. "After Benitez, he has kept it simple, not really inventing anything new, but always bringing the team joy."

As to his decision to start coaching, Cannavar admitted that he never really had much of a desire as a player, instead it being a feeling he developed later on.

"When I retired as a player, I first went to Dubai to work as a sporting director," the ex-defender pointed out. "But in the end, football is football and I'm really enjoying myself now and am focused on improving my methodology."

Though in China for now, the former centre-back didn't hesitate to share his ambitions and look ahead, with a return to Europe in some form or other increasingly likely.

"It is my dream to coach Real Madrid," Cannavaro said. "The Italian national team too.

"If one doesn't have these types of goals, it is better not to start coaching in the first place."

Cristiano Ronaldo the Ballon d'Or favourite but Mahrez an outside threat

With a month and a half until the Ballon d'Or is announced, the favourites are starting to become clear.

France Football unveils the 30 nominees for the Ballon d'Or

Cristiano Ronaldo is many people's favourite to win the award after Real Madrid's Champions League victory and Portugal's victory at Euro 2016.

"It won't be me, it will be Cristiano [Ronaldo]," Antoine Griezmann answered when asked about who will win.

Of the 30 players nominated for the award, Leicester City's Riyad Mahrez could surprise a few after pulling off the unthinkable and winning the Premier League, qualifying for the Champions League in the process.

The Ballon d'Or is presented by France Football and the Algerian ranks as the favourite among users with 1.2 million votes.

Mahrez is the favourite on MARCA.com in English while on the Spanish site Messi is clearly leading the polls.

Guardiola could have joined Real Madrid

Zinedine Zidane was the man Real Madrid turned to last January when the club gave up on the Rafa Benitez project, but in a parallel universe Pep Guardiola could have been the man taking over the Estadio Santiago Bernabeu dugout.

Los Blancos made a proposal to the Catalan, but he turned down their advances, having already agreed to join Manchester City.

"When Benitez was going through a tough spell at Real Madrid there was contact," Marti Perarnau - Guardiola's biographer - explained in an interview with La Sexta.

"There was an approach to Pep Guardiola see what he was going to do after Bayern Munich.

"A representative transmitted the message to [Guardiola], but he replied by saying that he was going to Manchester City and that he wasn't going to listen to proposals from anyone."

Perarnau made the stunning revelation at a presentation for his new book on the ex-Barcelona coach, called The Evolution.

Zinedine Zidane considers Toni Kroos such an important member of his Real Madrid squad that he didn't dare drop him for Wednesday night's cup match against third tier Cultural Leonesa.

Even though the German was already the man to have played the most minutes out of Los Blancos' squad this campaign, he remained on the pitch for all 90 minutes of that match in Leon.

It was one of the least risky matches for Kroos to be given a rest, yet he started and, even more curiously, he also played the whole of the second half even though the capital city side had built up a 2-0 lead by half-time.

Part of the reason for the player's permanence in the lineup is the fact that Luka Modric and Casemiro have been out with injury, so he is the only starting midfielder remaining.

"He had to play in that position because we have a lack of players in that area," Zidane explained after the 7-1 win.

"The plan was to give him a bit of rest, but he wanted to play until the very end.

"I asked him about [coming off] at half-time, but he wanted to play on and said he was fine."

Since missing the UEFA Super Cup due to his post-Euro 2016 rest, Kroos has played in every one of Real Madrid's 13 matches, racking up a mighty 1,121 minutes - which is 88.8 per cent of the total potential minutes.

While those numbers are impressive, there is also some concern that Kroos could end up knackered towards the end of the season, as he was in the 2014/15 campaign.

When you've won as many trophies as Cristiano Ronaldo, finding the will to demand more of yourself can be a tricky process but for the Real Madrid forward it's a simple case of shutting down the haters.

Despite lifting multiple Premier Leagues, Champions Leagues, and Ballon d'Ors, there are still plenty of people around who criticise the Portuguese star, and he thanks them for helping him prove them wrong.

"[I] use negative people and experiences to motivate [me]. I actually need my haters - they have helped me achieve all I have achieved," Ronaldo said to Coach Magazine.

That said, the winger also made clear his inner-belief as he pushes himself and strives to continue improving.

"I was," he replied when asked who's been the biggest influence on his career.

"My biggest inspiration has always been myself; nobody puts bigger demands on me than me.

"I said I admired [Luis] Figo and Rui Costa, but I never wanted to emulate anybody - I have just always focused on being the best me I can."

Finally, Ronaldo listed some of the toughest opponents he's had over the years, namechecking Lionel Messi and Ashley Cole.

"There is a big mutual respect between myself and Lionel Messi," the winger stated.

"The media like to make out like we have this big rivalry, but we don't. It is not like we are good friends, but there is a mutual respect on both sides.

"Over the years I had some great battles with Ashley Cole, he doesn't give you a second to breathe. He was such a tenacious player, quick, tough in the tackle, when he was at his peak.

"You knew it would never be an easy game."