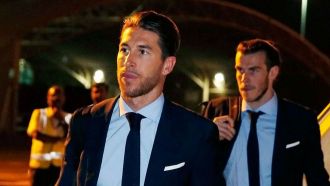 Ramos: Real Madrid are motivated and want another title for our fans

After a long flight to the United Arab Emirates, Real Madrid captain Sergio Ramos spoke of the fighting desire to deliver more silverware to the legions of Merengues fans around the world.

Off the back of a 5-0 thrashing of Sevilla, the Spanish giants are confident and the defender noted that getting the chance to defend their 2016 Club World Cup title was itself an honor.

"We really couldn't wait to arrive," Ramos told official club media at Abu Dhabi airport. "Being here is a prize in itself as we have the opportunity to defend this title and win it again.

"Now we have to adapt after the flight and fight to conquer our sixth Club World Cup. We will face it with much desire and enthusiasm. This is an opportunity to give one more title to our fans.

"We are very motivated after a great game against Sevilla and we feel very good at the moment. Now we have to maintain that balance and consistency."

Guardiola: City have proved the 'Barca way' can work in England

Manchester City manager Pep Guardiola took a big step towards his first trophy in English football with a 2-1 derby win over Manchester United on Sunday which sent his team 11 points clear at the top of the Premier League.

Guardiola, who won three Spanish league titles and two Champions League crowns during his time with Barcelona and then won three Bundesliga titles with Bayern Munich, had faced questions about whether his trademark possession style would work in England.

City finished 15 points behind Chelsea in third place last season but it will take a major collapse for them to not win this season's championship.

"We can play this way in England. People said we couldn't play the way we did in Barcelona in England but it's possible and we did it," Guardiola said after the victory at Old Trafford.

"I knew that last season. Always I believed we could do it. Everyone can play how they want, that's why football is so beautiful. I'm happy to go to Stamford Bridge and Old Trafford and beat them in this way." he said.

"Football is incredible. We talked about how to play United but never set offensively, and then we score two. Football is unpredictable," he said.

Despite the gap points, Guardiola was quick to make clear that the title race was far from over.

"This win means a lot in the way we played for our confidence but in three days we go to Swansea in the winter time. We are going to face a lot of difficulties. In December it is impossible to be champions but it's good for us, "he said.

The Spaniard also responded to comments from his United counterpart Jose Mourinho who had blamed the referee's failure to give his team a penalty for the loss.

"Last season it was the same - we won here and it was the referee. Today as well. Yesterday he spoke about the referee. We are an honest team. We had 75 percent ball possession, which means we wanted to play. We. came here and did that, "he said.

"We won because we were better in all departments."

Jose Mourinho said he "doesn't know" if Manchester United can pull back Manchester City's 11-point lead at the top of the Premier League after his side's 2-1 derby defeat on Sunday.

United's manager also took aim at the referee Michael Oliver over what he felt was a clear penalty for his team and, after pre-match comments about City players falling over easily, he noted their ability to use up time at the end of the game.

United need to produce an exceptional second half of the season and hope that City stumble but Mourinho hardly sounded bullish about denying Guardiola his first league title in England.

"It's a significant distance," Mourinho said of City's lead, before being asked if his team could make it up.

"We can work and fight for it. That is the only thing I say. Match after match and every match we are going to give everything, with our qualities, with our problems, that is what we do all the time," he said. .

But, not for the first time in his career, Mourinho focused his attention on a refereeing decision rather than his fighting performance.

The Portuguese coach believed Oliver should have condemned a penalty in the 79th minute when Ander Herrera went down in the box under pressure from City defender Nicolas Otamendi.

The referee instead of booked Herrera for diving, leaving Mourinho fuming and claiming it was a repeat of last year when he felt United should have had a penalty in the derby.

"But I also have to say that I feel sorry for Michael Oliver because I think he had a good game, I would say very good game, assistants the same. I think they came with the intention to make the perfect job they almost did , "he said.

Mourinho said he had not expected to lose to City without United's rivals scoring quality goals.

"I think when you see Manchester City play, you expect Manchester City to score great goals not to score two disgraceful goals," he said. Both came from set pieces and were helped by defensive misfortune.

"They are the last goals you expect to concede against a quality team like Manchester City, two very bad goals .... with rebound (s). (They were) incredibly lucky or unlucky, depending on (your) perspective," he said, before noting City's keeper Ederson had to make a double save in the late stages to secure the win.

Courtois' decision: Renew with Chelsea or return to Spain with his family

The future of Chelsea's Belgian goalkeeper, Thibaut Courtois, is still up in the air, with the player admitting that he has doubts about what to do with his career, be that honour his Blues contract (until 2019) or return to Spain.

One way or the other, Courtois wants to reach an agreement by the end of the current campaign.

As he acknowledged in an interview on the Belgian, Courtois is torn between renewing with the blues or returning to Spain with his family, which he misses.

"I miss my children," he said to the VTM network in Belgium.

"That's why I want to take some time to make the decision.

"If I renew, it's because I want to tell Chelsea that I'm happy here and that I want to play here.

"But my personal situation is making me think about what's best."

Rakitic: Cristiano Ronaldo has the bad luck of playing in the same era as the best

Despite having won his fifth Ballon d'Or on Thursday, Cristiano Ronaldo is still shy of Lionel Messi's level according to Ivan Rakitic and the Croatian feels as though the Portuguese star has been unlucky in the fact that he has played in the same period as the Argentine.

The Blaugrana midfielder played a much more defensive role Sunday's victory over Villarreal, but was effective nevertheless.

"Cristiano has been unfortunate to have played in the same era as the best," Rakitic explained in his post-match interview.

"With all due respect to Cristiano, in my eyes Leo is unique; there is only one number one.

"Ronaldo has been forced to measure himself against the greatest player ever."

Marc-Andre ter Stegen was arguably the Blaugrana's best performer at Estadio de la Ceramica, he made several key stops and Rakitic isn't at all surprised.

"His saves are not surprising," he admitted. "He's improving every year; he's among the best in the world.

"We get along very well off the field too."

Javier Mascherano is expected to leave the club in January upon his own request, although the former Sevilla midfielder refused to comment on such speculation.

"We don't know anything about that," he confirmed. "Any decision the club makes will be for the best.

"Mascherano is important to the team, he has our full support, we want him to stay for a while longer."

Monday morning sees the draw for the knockout phase of the Champions League take place, ahead of finding out who Los Cules will face, Rakitic made clear there are no easy matches at such a level.

"There is no easy match in the Champions League," he said.

"Maybe it would be nice to play in Basel, in my home country, Switzerland."