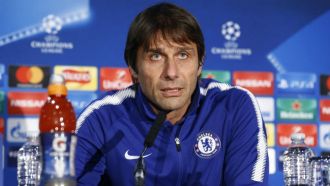 Conte: Atletico are a great team, we must respect their players and coach

Ahead of Chelsea's Champions League clash with Atletico Madrid on Tuesday, Antonio Conte spoke very highly on his rivals, paying respect to both players and to Diego Simeone.

Even though Los Rojiblancos are on the brink of going on, Conte guarantees that they are not to be underestimated.

"[Simeone] is a great coach, he's had great results and he's done a great job," Conte said in the pre-match press conference.

"I played against him many times and I've known him since his time at Catania, he's one of the best in the world."

Conte also had words of praise for Antoine Griezmann and company.

"He's a fantastic player, we'll have to pay a lot of attention to him and the rest because Atletico are one of the best in Spain."

The Italian boss strayed away from labeling Atletico Madrid a failure, despite being fully aware of their small chances to progress to the next round of the tournament.

"Our group is very tough, with Atletico, Roma and without forgetting Qarabag, who took points away from Atletico," he said.

"In the past, Atletico played great tournaments, reaching two finals, and it will be a surprise if they don't progress.

"But in this group, I repeat, it's not simple.

"We should be happy to have already been qualified."

Lastly, the former Italy boss was well aware of his side facing tough opponents in the next stage regardless of whether they top their Champions League group.

"If you finish first, you could still get teams like Real Madrid, Bayern Munich or Juventus," he concluded.

"It doesn't change a lot if you finish first or second.

"The most important thing is to reach the next stage, but for our mission and our confidence, it would be good to win and finish first."

The match kicks off at 20:45 CET at Stamford Bridge on Tuesday evening.

Morata: It's nice that they say Real Madrid miss me, but I wish they didn't

Real Madrid's struggles in front of goal have led many supporters of Los Blancos to lament the club's decision to sell Alvaro Morata to Chelsea last summer and the player is aware that many in the Spanish capital miss him.

The striker explained that it's nice to know he's missing, but that he'd rather Real Madrid were still winning without him.

"I don't know if Real Madrid miss me or not, but it's nice that people say that," he said in an interview with TVE.

"I wish, though, that they didn't have to say this, as that would mean things were going well."

"I hope [Cristiano Ronaldo] scores lots of goals at Real Madrid, although I hope he is tired by the time of the World Cup."

Morata also discussed his new life in London and spoke of how he has settled in.

"Technically [England] is not like Spain, but all of the players are very physically strong," the 25-year-old pointed out.

"The dressing rooms are also smaller than those've been before and ours is wooden.

"If I had been looking for things like money or a preferred city then I'd have stayed at home, as I had everything.

"But it's knowing that you have a realistic chance of playing each game if you train well.

"I didn't play as much last year."

He also explained that Antonio Conte is a very demanding coach, but that this forces players to step out of their comfort zone.

Ramos: Ronaldo and I have different opinions, but we're pulling in the same direction

They may not agree on everything, but Sergio Ramos and Cristiano Ronaldo still remain friends and have a good working relationship, the Real Madrid captain has insisted.

The center-back did not agree with Ronaldo's public statement about how Los Blancos are missing James Rodriguez, Pepe and Alvaro Morata, yet this hasn't affected their relationship.

"Nothing has ever happened between him and me," Ramos said in an interview with TVE.

"There has always been a great friendship between us.

"We have a lot of personality and have some different opinions, but we're pulling in the same direction."

He also spoke more generally about Real Madrid's start to the season and admitted it hasn't gone as well as he might have hoped.

"A draw here is seen as a crisis," the defender said.

"We have to remain calm, maintain confidence and go objective by objective.

"It may not be the best start to a season ever, but we're still there and we will fight for every title.

"I give the fans my word that we will show face to end and to death.

"We hope to come back from [the Club World Cup] with a title because it would be good for the group in terms of motivation.

"It would do us a lot of good, ahead of the Clasico."

Ramos won’t be available next weekend against Sevilla as a result of his record-breaking red card and he had his say on the refereeing and the forthcoming introduction of VAR.

"I'm in favor of having technology in football, but as long as the essence of football isn't lost," he said.

Next up for Ramos and co. is a midweek Champions League clash with Borussia Dortmund, although Real Madrid already know they will be finishing second in the group, regardless of this week's results.

Luis Suarez: I know Neymar and he would never sign for Real Madrid

Helping out at the opening of Adidas' newest 'Stadium' store in Barcelona, Luis Suarez is unafraid to tackle the big topics regarding the world world famous football team.

With Neymar no longer joining the striker at the Camp Nou, he is open in discussing why the Brazilian decided to leave as well as other hot topics including his own form, transfer rumours, and the World Cup with MARCA just a stone's throw away from the prisoners famous Placa de Catalunya square.

You're a quiet, smiling person. Do you associate yourself with the Suarez that everyone sees out on the pitch, fighting and arguing?

"Not at all, although I do recognize [that Suarez]. It's my way of playing. Fighting for every moment has led me to where I am today. In some games I think about it and I try to be calmer, but there's no way it can happen. "

"The quieter I am, the more uncomfortable I feel. So I have to be constantly fighting and arguing, but these things only happen out there on the pitch. Then, away from the pitch, I'm quieter and more good natured."

Is it true that you've been playing through the pain barrier during this season?

"Yes, but now I feel better. It required some complicated treatment and now I'm improving. I don't want to continue feeling that pain, I must prevent it from coming back again."

Do you think Neymar was right to leave Barcelona?

"Neymar is a mature person who was fully aware of the decision he made. Surely he made it with a lot of pain because he was happy here. But, we all have to accept that he was thinking of other challenges and that he wanted to take them on. "

"It was an understandable decision that he took with his family. There is no reproach, but admiration and love for everything that he gave the club and the relationship we had throughout those years."

There was speculation that he may one day sign for Real Madrid.

"Not at all. Honestly, I don't see it. I know what Neymar is like and the admiration he had for Barcelona and his teammates. I don't see him now going to play for Real Madrid."

After all that they've won under Zidane, how do you explain Real's poor form of late?

"Every team goes through dips in which they don't play well or don't get results. They shoot very often but can't find a way to score a goal. In football that's normal, we also have to go through those spells. And what we're clear about is that we can't give them any advantage in LaLiga. "

What has changed with Valverde's arrival?

"He's a coach who has a lot of confidence in each of his players. It's not that it's changed a lot since Luis Enrique but there are different ways of training and facing games. And we, as a team, always have to be ready to do it in the best possible way. "

There was a lot of talk about Barcelona not getting their targets in the summer. Was the team sufficiently reinforced after Neymar left?

"Neymar is a different and special player who expected many things. Different players who also contribute a lot have arrived, such as Gerard Deulofeu, who had already been at the club. Also Paulinho, who has quietened many critics and is performing at a very high level since he arrived. He's one of Brazil's captains. "

"Ousmane Dembele had the bad luck of injuring himself early on, but when he fit you you will see how he can surprise many people. There is a lot of speculation at the moment about players who can come and others who can leave, but we remain unaware of this. "

Is it true you facilitated Neymar's linking up with Edinson Cavani in some way?

"Not at all, I was totally away from it all. That's not something I would do."

Who taught you to turn your backside to defenders and protect yourself?

"This is something I have always done. Nowadays, defenders already know me and they don't let me use my body so much. So I must take advantage of my other virtues. I learned that move from a young age and I perfected it . My friends joke a lot about it. "

"The first challenge is as 2017 ends and then for 2018 to win everything with Barcelona. And to finish, compete in a good World Cup for Uruguay."

What do you feel when you're on a bad streak like the one experienced this season?

"These streaks, situations, symptoms, they are times when you aren't in good shape and you yourself are aware that no matter what you do, the ball won't ever go in. That's why I broke the other day when I missed . In another situation I would have taken it differently. If I had been missing many clear chances for a long time, I would have worried, but that wasn't going to happen. I knew exactly how it was going to happen. "

What a streak you've been on, by the way.

"I am very self-critical and I feel bad for not scoring. But the important thing is to help the team and if I am physically well or have played a good game, I am satisfied. I end up angry when I can't help the team. "

Who will be the hero of the World Cup? Messi, Neymar ... Suarez?

"There are many national teams that are playing at a high level and can win it. There are sides that have mixed youth and experience in their teams. It will be a great World Cup that will be memorable."