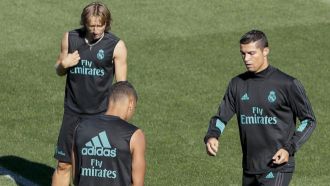 Zidane believes Isco is compatible with the BBC

Though he's yet to reveal his starting XI for the Supercopa de Espana against Barcelona, Zinedine Zidane has given a few clues, one of which appears to be a belief that Isco can play alongside BBC.

With both Cristiano Ronaldo and Gareth Bale's futures now seemingly settled, the front three will likely remain untouchable when all three are fit, meaning the Frenchman's biggest decision could be who staffs his midfield.

"We are all well, perfectly physically and mentally," Zidane said to teachers on Saturday evening.

"Everyone wants to play and that's good, meaning I will have to make choices.

"Cristiano is ready, he's fine. He's had a vacation but has physically worked hard and is ready."

Ask specifically about whether Isco and BBC could play in the same XI, the coach was a little more forthcoming.

"He [Isco] may be compatible," the Frenchman continued.

"I can do a lot of things, you'll see how we're going to play on Sunday."

Zidane: Whoever replaces Neymar will do well, but they won't be Neymar

A Barcelona team without Neymar cannot be underestimated in Zinedine Zidane's eyes, although the Real Madrid coach is aware that replacing the winger is an extremely difficult task.

Traveling to the Camp Nou for the Supercopa de Espana first leg on Sunday, the Frenchman is ready to face up to whoever Ernesto Valverde picks in place of the 222 million euro man.

"Whoever plays tomorrow will not be Neymar, because he is very good, but they will do well," Zidane stated to the assembled press.

What won’t change is the Blaugrana’s style of player, which Zidane feels to be the major threat posed to Real in Catalonia.

"On the contrary, they have made changes but in the end Barcelona are Barcelona," he noted.

"We know how they play and that's not going to change, their plans will not change.

"I said that there is no other like Neymar, he is irreplaceable, but there is another that will come in and do well. If we think tomorrow will be easier, then we are wrong."

With a packed squad to choose from following Madrid's triumph at the UEFA Super Cup, the Blancos boss is keeping his cards close to his chest, including the advent of Cristiano Ronaldo's first start of the season.

"You'll see tomorrow," remarked Zidane "We are all well, physically and mentally perfect.

"Everyone wants to play and that's good, so I'll have to choose.

"Cristiano Ronaldo is ready. He's fine, he's had a vacation, and although he's only been with us for a few days, he's worked hard on his fitness and he's ready."

That could herald the return of the BBC, which Zidane doesn't necessarily think will spell the end of Isco's run in the side.

"They are compatible," he noted. "I have to manage their rest, but it can be done.

"I can't do many things, so we'll see how I'm going to set us up tomorrow."

One trophy is already in the bag for Real in 2017/18 and the opportunity of a second is enough motivation for the coach, even if it doesn’t come against Barcelona.

"It is the Supercopa and it has a special value because it's another trophy," Zidane said.

"We know it's something more when it's Barcelona, ​​as for many people it's a game against our biggest rival, but for me it doesn't change anything."

Jose Mourinho used to joke that he'd prepare for Clasicos by training with just ten men on the pitch but for Zinedine Zidane that scenario must be avoided in the Supercopa de Espana first leg.

Real Madrid have had a man sent off in three of the last four encounters with Barcelona and while seeing out the opener at the Camp Nou, Los Blancos would come to face the decisive return without a key player.

In November 2015, the Blaugrana were cruising to a 4-0 win at the Estadio Santiago Bernabeu when Isco crashed in with a late challenge on Neymar, receiving his marching orders just as Sergio Ramos did in the second derby of that season.

However, Real went on to win that game with Cristiano Ronaldo netting the winner after his teammates' red card.

Madrid weren't so lucky the following campaign, drawing 1-1 with the full complement at the Camp Nou before Ramos was dismissed for a 77th minute lunge on Lionel Messi in a Clasico that Barcelona went on to snatch 3-2.

Klopp on Coutinho: I must accept the decision of the owners and players

Following his side's 3-3 draw at Watford, Liverpool boss Jurgen Klopp admitted that Philippe Coutinho situation is out of his hands.

The Brazilian continues to be linked with a move to Barcelona and reportedly submitted a transfer request to Anfield hierarchy.

However, Klopp insisted that he is refusing to focus too much on the saga and is determined to concentrate solely on the side.

"I have to accept the decisions of the owners and sometimes also the players. At this point, I'm only focused on the team," he said after the match at Vicarage Road.

"I didn't have time to think about this [Coutinho] because I had to prepare for the game. If it was annoying, I'd tell the player but I didn't get the transfer request."

Reports have emerged from the UK suggesting that Barcelona have completed the 40 million euro deal for midfielder Paulinho.

Coming from Guangzhou Evergrande, the Brazilian would be Barcelona's third addition of the summer after bringing Gerard Deulofeu and Nelson Semedo to Catalonia.

Daily Mail claims that the transfer is complete with the Blaugrana handing over Paulinho's 40m euro release clause.

Borussia Dortmund to reveal their Dembele decision on Sunday

Ousmane Dembele's future remains a mystery, but the Barcelona target's situation should become a lot clearer on Sunday, when Borussia Dortmund will make a statement.

Not wanting to address the issue before Saturday's cup match against Rielasingen-Arlen, club officials will meet after that game.

“We are concentrating on this match,” the coach told Sky on Saturday.

"Later tonight there will be a meeting and the club will announce its decision tomorrow."

The player is currently suspended by the club and will be until Monday, following his midweek training no-show, as he tried to push through a move to the Camp Nou.

Until now, the Bundesliga club have rejected all offers for the 20-year-old, but if they now decide to let him go then Dembele could have already played his final match in the famous yellow shirt, given that he isn't allowed to play against Rielasingen-Arlen.