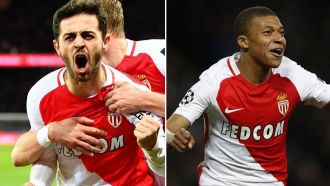 Friday, February 24 2017
Always active on the transfer front, Real Madrid continue to search all across Europe for football's biggest stars, whether they be established names or up-and-comers, and Monaco duo of Bernardo Silva and Kylian Mbappe hasn't gone unnoticed in the Spanish capital.

Scouts and other technical staff have realized that Monaco's Ligue 1 leading form is no coincidence and that young promising players like Bernardo Silva, Bakayoko, Lemar, and Mbappe continue to stand out under coach Leonardo Jardim.

Bernardo Silva has already been linked with a move to Los Blancos in the past, as the 22-year-old attacking midfielder continues to shine.

Mbappe too has impressed, his goalscoring rate and partnership with Radamel Falcao creating one of Europe's deadliest strike forces.

The 18-year-old striker has even earned comparisons to a young Thierry Henry because of his exploits.

The scouting reports from both players are glowing and the merengues are intent on not letting a player like Borussia Dortmund's Ousmane Dembele or Alexander Isak slip through the cracks again.

Mbappe is the youngest ever scorer for Monaco and made his debut back in December 2015, which means he has plenty of first-team experience for a player his age.

One thing is for certain, these players may not be at Monaco for very long, and Real Madrid want to make sure the very best are headed their way.

Claudio Ranieri has been officially fired as Leicester City coach on Thursday night.

Just two weeks ago the club officially released a statement supporting the Italian boss, yet have since changed face and consider the current string of results as proof that the club must move on.

The Foxes are winless since December 31 and are just one point above the relegation zone, quite the drop from a team that lifted the Premier League title just nine months ago.

"Claudio Ranieri, appointed Leicester City manager in July 2015, led the Foxes to the greatest triumph in the club's 133-year history last season, as we were crowned champions of England for the first time," the club said in an official statement. "His status as the most successful Leicester City manager of all time is without question.

"However, domestic results in the current campaign have placed the Club's Premier League status under threat and the Board reluctantly feels that a change of leadership, while admittedly painful, is necessary in the Club's greatest interest."

Hovering one point above the relegation spots, Leicester City decided it was in the club's best long-term interests to fire Premier League winning coach Claudio Ranieri, a decision that ex-international Gary Lineker slammed as opposed to what the game stands for.

Lineker had gone on Match of the Day, the show he hosts, in his underwear after the Foxes defied the odds to win the title last season.

"Firing Ranieri is inexplicable, unforgivable and gut-wrenchingly sad," Lineker said on social media, shortly after hearing of the club's decision.

In dramatic fashion Celta Vigo advanced to the next round in their Europa League campaign, the only Spanish side to do so, and it is quite clear who Eduardo Berizzo's men will be hoping to avoid.

Manchester United and Roma are the two clubs with the most prestigious pedigree, but Olympique Lyon, Ajax and German clubs Schalke 04 and Borussia Monchengladbach will not be easy either.

Jose Mourinho will be hoping to use the Europa League as a way to secure Champions League football for next season, as a race for fourth in the Premier League could be difficult to attain.

Rostov will be the only Russian side as Zenit was knocked out, so no long trips will await the Galician club.

Quite surprisingly, Belgian football is well represented with three teams in total, and the competition is more open than ever.

Tottenham Hotspur s Europa League hopes were crushed by mid-table Belgian side Ghent, who booked their spot in the last 16 with a 2-2 draw at Wembley on Thursday as the hosts paid the penalty for Dele Alli's first-half red card.

Gent, eighth in their domestic league, went through 3-2 on aggregate after the second leg of the last-32 tie and will be joined in Friday's draw by Olympique Lyonnais who won 7-1 at home to AZ Alkmaar for 11-2 triumph over two legs.

Borussia Moenchengladbach stormed back from 3-0 down on aggregate to beat Fiorentina thanks to a 12-minute hat-trick from Lars Stindl and AS Roma cruised into the next round 4-1 despite a 1-0 home defeat against Villarreal.

Spurs had begun in front of a record Europa League crowd of 80,465 at Wembley, where they have played European home games this term due to building work at White Hart Lane, and level the aggregate score after 10 minutes through Christian Eriksen.

But an own goal that glanced off the head of Spurs striker Harry Kane 10 minutes later put Gent back in the driving seat, before a moment of madness from Alli sealed Tottenham's fate.

The England midfielder showed the short fuse that was a factor in his early career as he leapt two-footed into a knee high challenge to draw a red card five minutes before halftime.

Spurs restored their advantage on the night with a thumping strike from midfielder Victor Wanyama but Jeremy Perbet, who grabbed the only goal in the first leg, scored again with a deflected effort after 82 minutes to end the hosts' expectations.

"I am very disappointed," said Tottenham's Argentine manager Mauricio Pochettino. "We started well and scored. The tie was open but we conceded a goal in one action in the first half. After that it was complicated."

Lyon's Nabil Fekir grabbed a hat-trick as the French side built on their already impressive first-leg advantage to crush Dutch side AZ by the competition's second-largest margin, after Valencia's 10-0 defeat of Rapid Vienna last year.

The 13 goals over two legs also equalized the competition record, set by Porto's 10-3 win over Spartak Moscow in 2011.

Fiorentina's Nikola Kalinic and Borja Valero scored inside the first 29 minutes to give the Italians a three-goal aggregate lead before Moenchengladbach launched an improbable fightback.

Stindl converted a penalty a minute before halftime and then twice more in quick succession after the break before Andreas Christensen powered home a header on the hour to give Gladbach a 4-2 win on the night and a place in the last 16.

Four-time European champions Ajax Amsterdam went through with a 1-0 victory on Thursday and the same aggregate score over Legia Warsaw, while Celta Vigo won 2-0 at Shakhtar Donetsk after extra time to clinch a 2-1 win over the two legs .

Zenit St Petersburg beat Anderlecht 3-1 at home, but went out on away goals after the match ended 3-3 on aggregate.

An ongoing rift between Massimiliano Allegri and Leonardo Bonucci has prevented to overshadow an excellent week for Juventus ahead of their Serie A return after Wednesday's Champions League victory over Porto.

It often appears as though nothing can stop this Juventus side, with the league leaders seven points clear after winning their last six and firmly on course for a record sixth straight straight Scudetto ahead of the visit of the 17th-placed Empoli on Saturday.

However, tension between Allegri and defender Bonucci threatens to destabilize the reigning champions after the latter marred his 300th appearance for the club by engaging in an ugly touchline spat with the coach during the 4-1 victory over Palermo on Friday.

Bonucci was subsequently dropped from the matchday squad for the Porto game and after a very public dressing down, was forced to watch on from the executive box, conspicuously perched alone on a stool, in an Allegri power play that has the potential to disrupt the team .

"Bonucci is a professional and has to behave according to the rules," Juventus director Beppe Marotta told journalists ahead of the Porto match. "Disciplinary action will not change his ability, it's a decision made for the good of everyone.

"In football the 'we' is above the 'I' and we're disappointed for Bonucci."

Allegri looked to play down the spat on Wednesday. "During the season there are always going to be moments of tension, but we were able to ride it out," he told Mediaset Premium.

However, when asked whether the center back would be reintegrated into the squad against Empoli, Allegri tersely replied that he had five defenders available, suggesting that Bonucci's punitive exile may be set to continue.

One player who has begun to integrate effectively into the side is Marko Pjaca, who broke the deadlock against Porto, finally delivering on his undoubted promise after a mixed start to life in Italy.

"I already saw from Saturday that the lad was changing attitude and he understood that some things are not enough in Italian football," Allegri said.

"He's changing his attitude and already has the technique, pace and talent, but he's young and we need patience with young players."

The emergence of Pjaca offers hope that Juventus can sustain their momentum but even as he continues to do things his way, Allegri must be aware that the ongoing rift with Bonucci is an open wound that has the potential to destabilize his champions-elect.
E-mail : [Email protected]
Previous: End | Next : He returned after 18 months with 2 goals
Views: 4551
- 9243 previous day