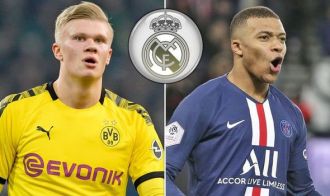 In an interview with the Daily Mirror, Killian Ebape revealed that his football idols were Zinedine Zidane and Cristiano Ronaldo!

At the same time, he stressed that his goal is to win the Champions League with the Paris Saint-Germain jersey.

"My first idol was Zidane, for everything he achieved with the national team. And then Cristiano Ronaldo. He won everything and remains the winner despite his successes. They both made history in football. I also want to write my own chapter in football books ", stressed the French striker.

Beyond that, Ebape made it clear that "my great ambition is to be a member of Paris Saint-Germain, which will win the first Champions League in its history."

Vaccine racing in the Bundesliga with 0% rake!

Kimich: "We knew before the game that Birki often stands outside his home."

The reason why he tried to "dig" the ball and finally scored the wonderful goal with which he signed the great victory of Bayern in the derby with Dortmund, was revealed by Josiah Kimich.

The result of the study, in addition to being a product of inspiration, was the beautiful goal of Josiah Kimich in the game against Dortmund.

After the end of the derby, which found Bayern the winner with 1-0, the golden scorer of the Bavarians revealed the "secret" of the excavated lobby.

So after describing the goal as the best of his career, he noted that he tried it because "we knew before the match that Birki often stands outside his home".

The new live casino of pamestoixima.gr has arrived!

Pogba will also have to drop his salary

The people of Juventus have made it clear to Paul Pogba that if he wants to return to Turin, he will have to drop his demands.

The issue of Paul Pogba's return to Juventus remains in the forefront.

In fact, a new publication, this time from "Corriere dello Sport", reports that the Bianconeri sent a message to the French media. Specifically, it concerns the part of his salary.

The people of Juventus seem to have stressed to the player that if he wants to return, he will have to drop his salary, which at the moment in Manchester United reaches 12 million euros per year.

Valverde: "It will be strange"

Read what Ernesto Valverde said about the presence of fans in the stadiums of Spain due to a crown.

Ernesto Valverde pointed out in his statements to the country's media how difficult and ... bad it would be to hold the games in Spain without the presence of fans due to the pandemic.

"It simply came to our notice then. Some matches can be played without people, but I don't know what it will be like to see 100 matches closed in Spain. The first will be the most difficult. I remember Barcelona - Las Palmas. The team was not prepared to play like that. Maybe now they are more adapted ", he stated and continued:

"The last few months have been difficult, especially for everyone, both for their own health and for that of their relatives. We are experiencing something unprecedented and the interest has focused on people who are doing more work in more important areas of football, which is still a spectacle. "

The main target of the "bianconeri" is Arkandius Milik

Juventus have decided who will replace Gonzalo Higuain, who will leave the Italian champions this summer to continue (most likely) his career at River Plate.

The main target of the "bianconeri" is Arkandius Milik, who has another one-year contract with Napoli, until the summer of 2021 and does not intend to renew.

The Polish international striker is considered a reliable solution, but in order to complete his transfer, the "partners" will have to drop their claims, which amount to 40 million euros. Milik is a personal choice of Mauricio Sari, who suggested he be acquired by the Juventus administration.

Igalo will return to Shanghai Shenhua

Nigerian striker Odion Igalo will most likely leave Manchester United on Sunday (31/05) and return to Shanghai Shenhua, which offers him a legendary contract.

The 30-year-old joined Ole Gunnar Solskj ομάδαςr's side on a four-month loan deal in the January transfer window to help Marcus Rashford be injured. His loan expires in 4 days and the most likely scenario is to leave Old Trafford and renew with Shanghai Shenhua, which offers him 6 75 million for 4 years.

Chelsea intend to transfer the Spanish goalkeeper in the summer as Frank Lampard is not satisfied and intends to put him on the list of Chelsea players on loan.

The management of the "blues" disagrees, as Kepa was acquired in 2018 with a record amount of acquisition of a goalkeeper by Athletic Bilbao instead of 80 million euros, but Lampard insists and emphasizes that Kepa is not in his plans for the new season.

According to Spanish media, Valencia is examining his case and it is not ruled out that he will move in the summer to acquire him, with a proposal to acquire him on loan for a year. The Spanish team urgently wants a goalkeeper, as Jasper Silesen will return to Ajax, from which Lampard wants Andre Onana.

Lautaro Martines is now presented "closed" by the Catalans,

In "burning coals" are the "nerazzouri", who are worried about the degree of commitment of Lautaro Martines to the team.

Serie A is expected to return soon and Inter will continue their hunt for Juventus. In this endeavor, she wants all her stars to give a thunderous "present", something they fear will not apply to Lautaro Martines.

No, he is not on the list of injured or punished. So his physical presence will be on the field. But spiritually?

The series of the player's transfer to Barcelona is well known and well-spoken. During the match, the bad luck was produced by his name, which is constantly in the report of the "blaugrana". Lautaro Martines is now presented as "closed" by the Catalans, who are said to continue from next year.

But because this season is still running, the "nerazzouri" are particularly worried about the psychological state of their player. According to "Mundo Deportivo", there are doubts about how committed he is to the remaining matches of the team. Inter are at -9 from Juventus with one game less and will have to give 100% in the final of the championship, in order to have hopes for the title.

In fact, it is not ruled out that Antonio Conte will have a special discussion with him in order to land him in the Italian reality. However, it remains to be seen how the player himself will respond to the return of competitive obligations. He knows that his future is likely to be in Barcelona, ​​but Inter are the ones who need him now.

Manchester United have made a very nice move to help teams that really need money.

The decision to withdraw from the financial agreements it had with Bolton, Burton and Harts for football loans was taken by Manchester United, in order not to further increase the pressure on these clubs that have been affected by the suspension of the championships due to coronation.

In particular, goalkeeper Joel Pereira was playing in Harts, which was relegated due to the final suspension of the championship, the average Ethan Hamilton was given to Bolton while the other goalkeeper, Kieran O'Hara, was playing for Burton Albion.

In total, the amount owed by the three teams to Manchester United reaches 150.000 euros, however, according to the sports version of the Daily Mail, the "red devils" are not going to claim this amount, since in no case do they want to throw them away. the groups on the cliff, for money which for her is nothing great.

Vaccine racing in the Bundesliga with 0% rake!

Herman Burgos, a direct associate of "Tsolo" from the moment he took over the Spanish team, will be a thing of the past for the technical staff of "Rochiblancos", at the end of the current season.

Without his "right hand", Diego Simeone will continue on the bench of Atletico, as everything shows. Herman Burgos, a direct associate of "Tsolo" from the moment he took over the Spanish team, in December 2011, will be out of the shocking past of the technical staff of "Rochiblancos", at the end of the current season.

This is a development that has been evident since last year, when the veteran Argentine goalkeeper was the only one from Simeone's staff who did not renew his contract. The reluctance of the Madrid administration to further increase his earnings (Burgos is already paid more than some of La Liga's first coaches), as well as the 51-year-old's desire to test his strength as head coach, lead him to leave Atletico. .

It is noted that Burgos had led as their first coach "Rochiblancos" in winning the Europa League, but also the European Super Cup, in 2018, as in the finals with Marseille and Real, respectively, Simeone was punished, due to his dismissal in the first semifinal with Arsenal.

As for the Argentine's replacement, Atletico's management would like to see Gabi in this role. Until two years ago, the team's leader continued his football career in Al Sadd, Qatar, under the coach of the former Barcelona star Xavi, but he has not hidden his desire to return to his favorite Atletico and serve her from another position.

However, if Gabby eventually joins the Rochiblancos coaching staff, he will likely start from scratch, as did his former team-mate Thiago Mendes. For Diego Simeone, the obvious choice - perhaps the only one - is his compatriot Nelson Vivas, who was his assistant at the Estudians, River Plate and San Lorenzo, but was unable (for personal reasons) to follow him in 2011. Madrid. The old international defender finally joined Atletico's staff in 2018 and now seems like the ideal choice for the No. 2 on the bench.