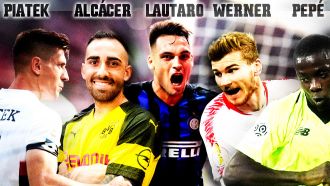 Luis Suarez will turn 32 on January and Barcelona are starting to seek a player to replace him in the future.

The Uruguayans has admitted that it would be normal if the Catalans comb the market for an extra striker, due to his age

Since arriving at the Camp Nou in 2014, he has scored 158 goals in 212 official matches; the last three against Real Madrid on Sunday.

One of the options that the Blaugrana will examine, as confirmed by MARCA, is that of Krzysztof Piatek, Genoa striker, who has scored 13 goals in 11 official matches in his first Serie A season.

Neither his transfer price, nor his salary will be high and that's the reason why their scouts are following his progress.

Meanwhile, Paco Alcacer is on loan at Borussia Dortmund, who are eager to meet his 23 million euro purchase option.

The former Valencia striker is owned by Barcelona and if the Blaugrana promise him more playing time, he might return to the Camp Nou next season.

Another name that has been heard during the last few weeks is that of Nicolas Pepe, who has scored seven goals and given seven assists at Lille OSC so far this season.

Aged 23 years old, he can also play in the wing and he finished his previous campaign with 13 goals.

Finally, there are two less realistic alternatives in Timo Werner and Lautaro Martinez.

The former is owned by RB Leipzig who have never been in need of extra cash, while the latter has only recently arrived at Inter, after a great season at Racing de Avellaneda with 22 goals in 44 games.