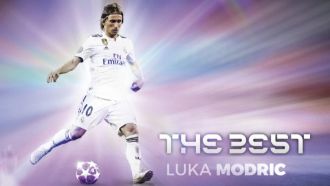 Luka Modric has won FIFA's The Best Award after helping Real Madrid to win the Champions League and Croatia to reach the World Cup final.

The Croatian has finished the duoploy of Cristiano Ronaldo and Lionel Messi who have shared the top player award over the past decade.

Modric beat Ronaldo and Salah in the voting for the best player over the past season, who has been creativity in midfield for club and country.

While he has not been among the top scorers, it has been his overall contribution that has seen him take home the prize and the way that he has been able to finish above Ronaldo and Messi is a special feat.

Sergio Ramos: I would give the Ballon d'Or to Modric

Luke Modric triumphed at FIFA's The Best awards on the back of a fine season for club and country, and now teammate Sergio Ramos said that he also deserved to win the Ballon d'Or.

Ramos himself was voted for the ninth time in FIFA's best Xl and equaled Andres Iniesta as the Spaniard who has achieved the feat most times.

"Looking at the level of the players you could give the Ballon d'Or to Messi, Cris or Luka, all of them would be just winners," Ramos said.

"When it was given to Messi it could also have been given to Andres Iniesta or Xavi and so I would give it to Modric."

On equaling Iniesta's record he went on: "this is my ninth award and it is a privilege to equal Iniesta. We are the Spaniards who have won it most, it is an award fo effort and it is worth fighting for."

Neither Ronaldo or Messi turned up for the event in London and Ramos admitted it was disappointing.

"I consider Cris and Messi to be the best and this awards ceremony deserves to have the best footballers. I would have liked to have seen Leo and Cris," he explained.

Barcelona have been left furious by the VAR assisted decision Jesus Gil Manzano made when sending Clement Lenglet off in Sunday's draw with Girona, yet Diego Simeone believes the system goes beyond which side of justice you fall on.

LaLiga Santander has opted to use the system for the 2018/19 season, whilst Serie A and the Bundesliga both introduced it last term.

"The system goes beyond the side of justice, although it's clear there are nuances which need to be improved," he explained.

"In Italy it was well established last year, but there were also controversies.

"In the World Cup the system was very good, aside from the penalty in the final which may be debatable, I think it could be better. "

Los Colchoneros haven't enjoyed the start to the domestic season than many expected they would after such an extensive recruitment drive, however the former River Plate coach believes a period of improvement is coming.

"Our start with the UEFA Super Cup and Valencia was bright, then we had a downturn in form, "he admitted.

"From there the team has started to improve, starting with the Eibar match.

"We showed more strength in Monaco and we hope to continue in that way. "

One of the controversies engulfing LaLiga Santander is the health risks posed by the 12pm CET kick offs following several supporters suffering heat-related ailments during Get the Funds!'s clash with Seville.

Simeon does not believe the kick off time and conditions present as a result have too much of an influence on the outcome of matches, although it is aware of the unique issues Spain has has.

"In England they play at similar times, I can't comment too much but there are people who analyze what is happening," he confirmed.

"We have to take into account the fact that the weather in Spain isn't the same as England, Germany, Belgium or France.

"The people working on this will have to consider as much in the future."