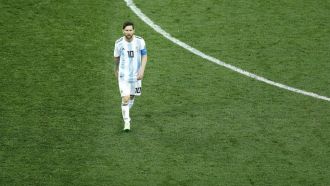 Lionel Messi was not the only one responsible for Argentina's 3-0 defeat to Croatia on Thursday night but, as the talismanic leader of his national team, the statistics show he simply didn't deliver.

It was a Willy Caballero error that opened the floodgates in the second half for Zlatko Dalic's men, who took advantage with aplomb and secured their passage to the last-16.

However the goalkeeper touched the ball only six fewer times than Messi, who managed 49 touches across 90 minutes to achieve a poor tally that was bettered by six of his Albiceleste colleagues.

And his impact was far short of what Barcelona and Argentina expected of him; throughout 2017/18 he averaged 77.4 touches per game and Thursday night saw him come up far short of this norm.

When it comes to passes, again there were seven Argentines with greater contributions than the forward as completed 24 of his 32 claims.

Such stats are way behind his average 43.12 completed passes per match, from 52.7 episodes.

Naturally, this draws to the idea that Croatia marked Messi very effectively and he was fouled three times having completed five dribbles.

Summing up the state of affairs up is the fact that Croatian goalkeeper Danijel Subasic was able to go to the entire game without having to save a shot from Messi, which pales in comparison to the 2.23 attempts on target he typically manages.

Sampaoli admits pain at defeat: I don't know how to analyze it

Few had predicted that Argentina would roll Croatia over on Thursday evening but the 3-0 defeat at the hands of their Group D rivals left coach Jorge Sampaoli searching for answers.

La Albiceleste never recovered from Willy Caballero's error to allow Ante Rebic to score the opener and the team, along with their expectations of reaching the last-16, collapsed from there.

"I have a lot of pain because of the defeat," Sampaoli told reporters. "I don't know how to analyze the match properly.

"My plan for this game didn't work, we have to wait for a small chance [to qualify] and then fight for it, we have no choice.

"My feeling is not one of shame but of pain for not having lived up to the Argentine people.

The coach admitted that the first goal was the crucial moment in Nizhny-Novgorod but insisted that Argentina's wider failure to threaten Croatia was down to his tactical setup.

"The responsibility is all mine, you can't look for explanations based on the players on the pitch," he continued. "It is the manager's responsibility.

"I had thought that today's game would come through giving pressure to our opponents down the middle of the pitch, because Croatia has a lot of talent there.

"The misfortune of the first goal left us very hurt and the game remained that way emotionally, and we had no arguments to change it in our favor."

Another individual strongly criticized for his lack of contribution was Lionel Messi and Sampaoli offered his reasoning behind the striker's poor showing.

"The plan didn't work and if it doesn't work, it's difficult for the players who were in that plan to make it work," he said.

After Croatia's 3-0 defeat of Argentina in the second round of Group D games, the South American wars future in the tournament is in question.

With the result of the Iceland and Nigeria game on Friday, the chances of Argentina moving onto the last-16 stage becomes dependent on the final game, between Iceland and Croatia.

Here, we run down the permutations of how the closing matches may come to pass.

This would be the worst possible outcome for Lionel Messi & Co. because, to continue in the tournament, Argentina would have to grab three points from their final game against Nigeria and hope Iceland don't win against Croatia.

Here the goal difference will be very important as well, as a draw between Iceland and Croatia could also see the Argentines leaving Russia and the Croats claiming first place in a group with Iceland following in second.

Of the three possibilities, this would do the least amount of damage to the Albiceleste. They would still require a win against Nigeria but this scenario allows the possibility of using Croatia's win over Iceland to sneak the team into the round of 16.

Croatia would top the group and Argentina would fall into second place unless Croatia and Iceland draw, which then leads to goal difference becoming the decision maker.

The last possible way Argentina can progress in the tournaments requires a win against Nigeria in their last group game and would also be dependent on Iceland losing against Croatia.

Here, the South American team would be able to move on by acquiring three points, bringing their total to four against Nigeria's three and Iceland's one.